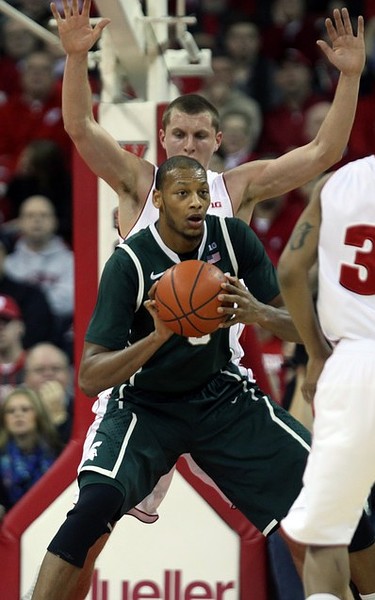 Tough loss for Wisconsin on its homecourt last night to Michigan State. Among legit Big Ten contenders, the Badgers, Gophers and Hoosiers all now have suffered defeats on their turf. Michigan State, Michigan and Ohio State have held serve at home, which is key. No shame in Wisconsin losing to a very good Michigan State team, which is where I will begin daily links on this chilly Wednesday.

Tom Oates of the Wisconsin State Journal says the Spartans in many ways are just like the Badgers ? only better.

If you are scoring in Madison, that?s four wins in a row over the Badgers for the Spartans and the seventh in the last nine games.

Minnesota?s loss at home to Michigan last week was painful. Afterward, Gophers coach Tubby Smith said his starters lacked intensity in practice the day before the game and that it ?raised its ugly head? in the game.

The latter Twitter accounts are those of Williams' fellow starters: Joe Coleman, Andre Hollins, Trevor Mbakwe and Austin Hollins. As you would suspect, Williams was sorry for airing his frustrations.

Smith has called out his seniors in the past, so this is no shocker. But Marcus Fuller of the St. Paul Pioneer Press says that Smith took some of the blame, too, saying he may have been pushing his players too hard. And Williams and Coleman have been dinged up. Minnesota will look to end a two-game losing skid tonight at Northwestern. Then maybe everyone can hold hands and sing ?Kumbaya.?

When watching Indiana tonight against  Penn State, keep an eye on how the Hoosiers perform in the second half. It has been a bugaboo all season.

In four of Indiana?s five conference games - including the last three - the Hoosiers have been outscored in the second half. This must end, as Indiana needs to learn how to finish. It also needs to tighten its defense and rebound a bit better.

The Wildcats won?t be a pushover, especially at home, vs. Minnesota tonight. One reason: Northwestern is playing better defense. But, it still needs to rebound better, as NU is last in the Big Ten with just 26.5 boards per game.

But, honestly, when wasn?t rebounding an issue in Evanston? Exactly.

Nice win last night for Illinois at Nebraska, as the defense and rebounding impressed–finally. In fact, it was a must-win for a Fighting Illini team that had lost five of seven and three in a row.

Now, can Illinois build on the momentum?

The Lansing State Journal conducted a poll with readers, asking them who is their favorite Big Ten coach. No shockers among the results. Tom Izzo and Tom Crean were Nos. 1-2. Who was last? Wisconsin?s Bo Ryan.

All the underclassmen?s names are in for the 2103 NFL draft. In the end, a record 73 players declared. And CBSSports.com?s Bruce Feldman listed the top 10 teams hit hardest by early defections.

There is just one Big Ten team on Feldman?s list: Michigan State, which saw three players bolt early: defensive end William Gholston, tight end Dion Sims and running back Le?Veon Bell. The losses of Sims and Bell could be especially hard for an offense that had its struggles in 2012.

Winter conditioning is a thankless, lonely time for players. But, it?s also a time for bonding. And it?s a time when leaders emerge. That?s what?s happening at Nebraska.

It?s understandable why Wisconsin fans are still rankled by Bret Bielema?s unexpected departure for Arkansas shortly after the Big Ten title game. And Bielema is feeling their wrath via Twitter. Yes, Twitter. Even more amazing: Bielema is having snarky exchanges with fans.

You won?t win, Bret. So, why try? Take the high road. You?ll thank me later.

Nebraska has a connection to each starting quarterback in this year?s Super Bowl-the 49ers Colin Kaepernick and the Ravens? Joe Flacco bit faced the Cornhuskers while in college with unimpressive results. But, look at the dynamic duo now! Amazing.

No daily links would be complete without some type of Harbaugh story, right? Well, here you go. This one comes via HawkCentral.com and talks about the Harbaugh family?s three years in Iowa City from 1971-73 when Jack Harbaugh was an assistant to someone named Frank Lauterbur. Who? Never mind, just read. And enjoy.

Seems Jim Harbaugh was an intense elementary school student who gnawed on crayons. Please tell me you aren?t shocked.

Speaking of Iowa, there will be no ticket price increase for football games for the first time in five years. More money to spend at that gyros stand on Melrose Avenue right across from Kinnick Stadium!

One more story with a Super Bowl angle, this time from the great Steve Sipple of the Lincoln Journal Star who says former Huskers fullback Tom Rathman teaches the 49ers backs what he learned at Nebraska.

I lied: One more ?Super? tidbit: This will be the 14th Super Bowl in a row that will include a Purdue player.

That active streak is No. 2 to Nebraska?s current run of 20 Super Bowls in a row with a participant.

Countdown to the start of #Huskers' spring practice: 38 days

My take: Amazing. I can?t wait!

My take: Moral of the story: play more players.

?@UberFacts: A proper handshake should last for about 3 seconds.?// Tom Crean's average postgame handshake is 0.3 seconds.

My take: That concludes today?s lesson on handshake etiquette.

So, how many losses (in conference) will the Big Ten champ have? Thoughts, tweeps?

"I think we?re just as good as that team, and I think we gave one away tonight," Iowa's Aaron White.

My take: It was a nice rally by the Hawkeyes after they fell behind by over 20 at Ohio State. This Iowa team is getting better. I will be interested to see if it can win at Purdue over the weekend.

My take: Illinois will need more of a well-rounded effort like that from here on out.

Doesn't seem that long ago Mich St got beat impressively by #Gophers. Equally as impressed how much better Spartans look going 6-0 since.

My take: The Spartans are the Big Ten?s hottest team.

My take: Rodney needs to get it in gear to help Minnesota break this two-game funk.

Michigan State, by the way, plays at IU on Sunday. Yes, Assembly Hall will be rocking. First, of course, is tomorrow night vs. Penn State.