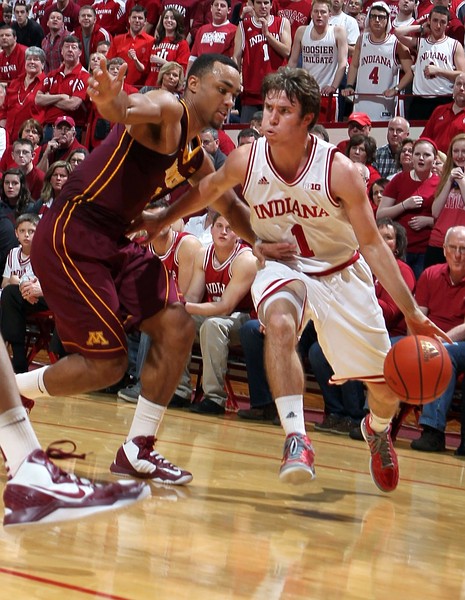 It's Monday, and that means it's time for my latest Big Ten hoops power rankings. This week, following Michigan's first loss, there's a new – and familiar – No. 1. See where I rank your team in this post. Don't agree with the rankings? Feel free to leave your thoughts in the comment box at the bottom of the post. Or tweet it my way (@BTNBrentYarina).

1. Indiana, (15-1, 3-0) – There's been whispers about it, but it's time Victor Oladipo received more Big Ten Player of the Year chatter. Already one of the Big Ten's elite defenders, Oladipo is shooting a ridiculous 68 percent, including 69 percent in Big Ten play (18-of-26).
Last week: No. 2

3. Minnesota, (15-2, 3-1) – It's not often that a loss improves a team's overall stock, but what Minnesota showed in almost rallying all the way back from a 23-point halftime deficit at a raucous Assembly Hall proved a lot about this deep and talented team.
Last week: No. 3 4. Ohio State, (13-3, 3-1) – After losses to Duke, Kansas and Illinois in its first three tests versus ranked foes, the fourth time was the charm for Ohio State, which sent then-No. 2 Michigan to its first loss Sunday. Defense was the difference this time against top competition, as Deshaun Thomas still lacked a wingman.
Last week: No. 6

5. Michigan State, (14-3, 3-1) – Exhale, Michigan State fans. The scare Branden Dawson gave us when he went down holding his knee Sunday against Nebraska was nothing more than that. The athletic sophomore returned and showed his usual explosiveness, evidenced by this last-second alley-oop.
Last week: No. 5

7. Illinois, (14-4, 1-3) – Saturday's 74-51 loss at Wisconsin wreaked of last year's uninspiring play down the stretch; you know, the  pathetic effort that ultimately cost Bruce Weber his job. Seniors Brandon Paul and D.J. Richardson must make sure there isn't a repeat.
Last week: No. 4

8. Iowa, (12-5, 1-3) – Sunday was a great day for the Hawkeyes. Finally playing a non-Big Ten power, Iowa drilled Northwestern for its first Big Ten win. Perhaps even more important, though, was sharpshooter Josh Oglesby finally busting out of a season-long slump.
Last week: No. 8

9. Purdue, (8-8, 2-2) – The way fellow freshmen Ronnie Johnson and A.J. Hammons are playing, it only made sense for Matt Painter to insert Rapheal Davis into the starting rotation. He did Sunday, and Davis rewarded him with a solid 10-point, 5-rebound effort.
Last week: No. 9

10. Nebraska, (9-8, 0-4) – Sans Brandon Ubel, the Huskers went into the Breslin Center on Sunday and gave the Spartans everything they could handle for 40 minutes. That's a promising sign and a massive confidence booster for this inexperienced unit.
Last week: No. 11

11. Northwestern, (10-7, 1-3) – It must be painful to be Drew Crawford. Not only is the star out the rest of the season with a shoulder injury, he must watch what's left of this Northwestern offense and constantly think about how he could help in some way, any way.
Last week: No. 10