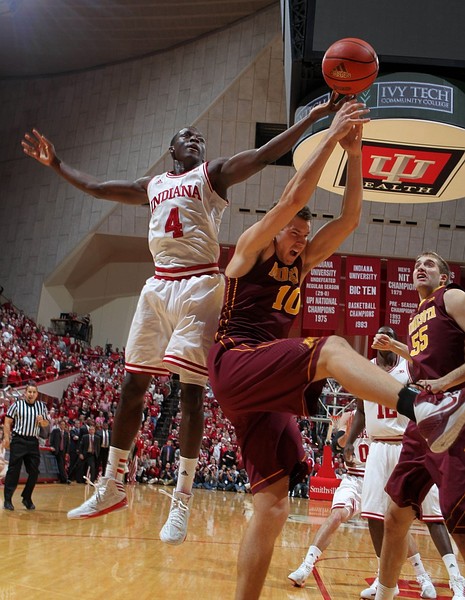 Victor Oladipo had 20 points and six rebounds and Jordan Hulls knocked down four 3-pointers, helping No. 5 Indiana hold off No. 10 Minnesota's late charge for an 88-81 victory Saturday. The Hoosiers (15-1, 3-0 Big Ten) have won six straight overall and 18 in a row at Assembly Hall.

Minnesota (15-2, 3-1) was led by Andre Hollins with 25 points but had its 11-game winning streak snapped despite rallying from 23 points down at halftime to within 3 with 19.5 seconds left.

Jordan Hulls joins our crew for a postgame interview:

Rodney Williams puts back another one:

Yogi Ferrell steals it on one end, takes it distance for lay-up:

FINAL: Victor Oladipo scored 18 points and grabbed six rebounds and Cody Zeller added 18 points and six boards to lead No. 5 Indiana to an 88-81 victory over No. 10 Minnesota on Saturday at Assembly Hall. There were five players in double figures for Indiana (15-1), including Jordan Hulls, whose 21 points led the charge to victory. The Hoosiers also got double-digit contributions from Christian Watford (15 points) and Kevin Ferrell (13). Indiana hit 51 percent of its field goals (27-of-53), including 42 percent from distance (8-of-19), and yet still grabbed 21 offensive rebounds. However, Indiana shot 26-of-40 from the free throw line. Trevor Mbakwe had 13 points, corralled 10 rebounds, had three assists, and shot 5-of-9 from the field for Minnesota (15-2) in the loss.

HALFTIME: Jordan Hulls hit 4-of-5 3-pointers and scored 14 points for No. 5 Indiana in the first half to carry the Hoosiers to a 52-29 lead over No. 10 Minnesota. Victor Oladipo was hot, as well, shooting 5-of-5 en route to tallying  11 points. The Hoosiers led from the start and led by as many as 23 points. Indiana made it rain from long range, shooting 64 percent (7-of-11) from three-point land. Indiana goes into the break with the offensive rebounding advantage, with six to the Golden Gophers' seven. Minnesota's Andre Hollins already has 14 points.