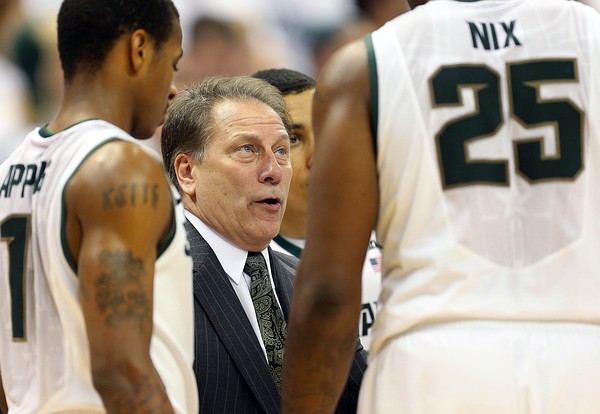 Branden Dawson scored a career-high 17 points, including a late steal and tiebreaking dunk that helped No. 22 Michigan State hold off Iowa 62-59 on Thursday night. Gary Harris had 14 points for the Spartans (13-3, 2-1 Big Ten), who hung on late for their eighth win in nine games.

FINAL: Iowa's trouble at the free throw line came back to haunt it against No. 18 Michigan State. The Hawkeyes shot 60 percent from the line in a 62-59 loss on Thursday at Carver-Hawkeye Arena in Iowa City. Zach McCabe lead Iowa (11-5) in the loss with 15 points, seven rebounds, and 6-of-9 shooting from the field. Branden Dawson sparked Michigan State (13-3), as he contributed 17 points, pulled down six rebounds, and made 7-of-12 shots from the floor in the win. Adreian Payne nailed 5-of-7 shots from the field and scored 10 points. The Spartans also got double-digit contributions from Keith Appling (12 points) and Gary Harris (14 points). Melsahn Basabe was 5-of-5 from the floor and chipped in 14 points for the Hawkeyes. Iowa shared the ball to the tune of 18 assists on 23 baskets. The Hawkeyes also got a double-digit effort from Aaron White (11 points). Iowa was winning 13-12 early in the game before it went on a 13-2 run to extend its lead to 12 points in the first. Eric May finished the run off with a field goal, which helped Iowa lead 28-24 at halftime.