No. 2 Michigan holds off feisty Nebraska, moves to 16-0 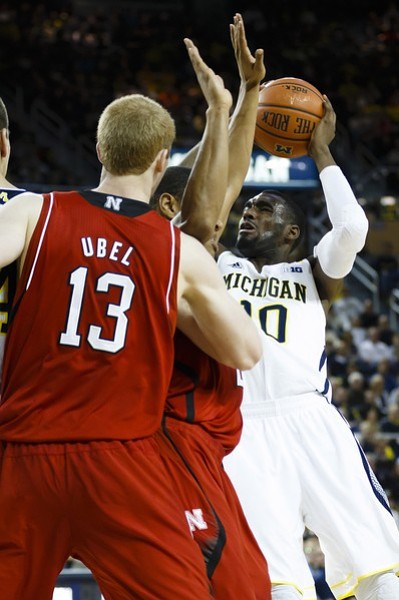 Glenn Robinson III had 14 points, including a pair of crucial dunks in the second half, and No. 2 Michigan equaled its best start to a season with a 62-47 victory over Nebraska on Wednesday night.

The Wolverines (16-0, 3-0 Big Ten) overcame their shakiest shooting performance in a while, holding the lead for the entire second half. The only other Michigan team to start 16-0 was the 1985-86 edition that went on to win the Big Ten title.

Ray Gallegos scored 19 points for Nebraska (9-7, 0-3), which held the Wolverines to a 39 percent mark from the field. Michigan, which beat its first two conference opponents by 28 points apiece, went 3 of 17 from 3-point range.

Glenn Robinson III gets the steal and slam:

Mitch McGary gets another big swat:

FINAL: No. 2 Michigan held Nebraska to 19-of-57 shooting, as defense led the Wolverines to a 62-47 victory on Wednesday at Crisler Center in Ann Arbor. Michigan (16-0) held Nebraska (9-7) to 33 percent shooting from the field. Tim Hardaway Jr. had a big game for the Wolverines, with 15 points and 11 rebounds, in a game where the lead changed hands eight times. Trey Burke (18 points), Glenn Robinson III (14) and Nik Stauskas (13) all scored double figures for the Wolverines.  Brandon Ubel scored six points and yanked down 11 rebounds for the Cornhuskers in the loss. Nebraska got double-figure scoring from Dylan Talley (12 points) and Ray Gallegos (19 points).

HALFTIME: No. 2 Michigan leads 25-20 at halftime after locking down Nebraska's offense, holding the Cornhuskers to 32 percent shooting and just eight field goals. The Wolverines, who only registered two assists and shot 1-of-10 from distance, are winning the rebounding battle (24-17). Michigan and Nebraska traded the lead eight times in the first half. The Cornhuskers led 12-11 when the Wolverines went on a 7-0 run to take a six-point lead. Glenn Robinson III has eight points and three rebounds to lead Michigan. Shavon Shields already has six points and five rebounds.