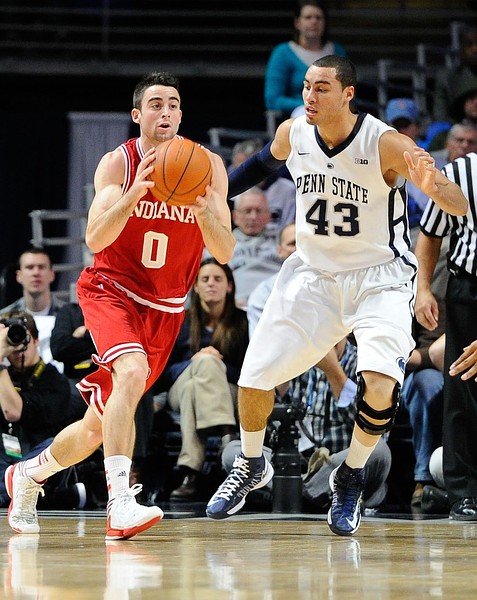 Christian Watford scored 16 points, Jordan Hulls added 14 and No. 5 Indiana used a big first-half run to race past Penn State 74-51 on Monday night. The Hoosiers' breakneck offense could rarely be stopped in the first half before the pace slowed down in a sloppy second half.

But it barely mattered after Indiana (14-1, 2-0 Big Ten) built a 19-point lead in the first half behind Watford's inside-out game and Hulls' quick-release jumpers.

Jermaine Marshall had 11 points for the Nittany Lions (8-6, 0-2), which had a five-game home winning streak snapped. Ross Travis added 14 points and five rebounds.

Victor Oladipo with another tip pass to Zeller for dunk:

Victor Oladipo powers it down with two hands:

FINAL: Christian Watford scored 16 points and grabbed eight rebounds to lead No. 5 Indiana to a 74-51 win over Penn State on Monday at the Bryce Jordan Center in University Park. Jordan Hulls, fresh off a 0-point effort, was 4-of-6 from the floor and chipped in 14 points for Indiana (14-1). The Hoosiers shot 52 percent from the field (22-of-42). Indiana shot 8-of-16 from three-point range during the game, good for 50 percent. The Hoosiers shot 22-of-34 from the free throw line. Indiana was able to secure 14 offensive boards. The Hoosiers also got solid contributions from Cody Zeller (15 points) and Victor Oladipo (10).

HALFTIME: Christian Watford scored 13 points for No. 5 Indiana in the first half to carry the Hoosiers to a 44-27 lead over Penn State. Indiana built its lead by attacking the rim and getting to the foul line, where it shot 10-of-13.Indiana used an early 13-0 run to blow past the Nittany Lions and take a 15-3 lead. The Hoosiers made it rain from long range, shooting 55 percent (6-of-11) from three-point land. Watford and Jordan Hulls (10 points) each hit 2-of-3 from downtown.