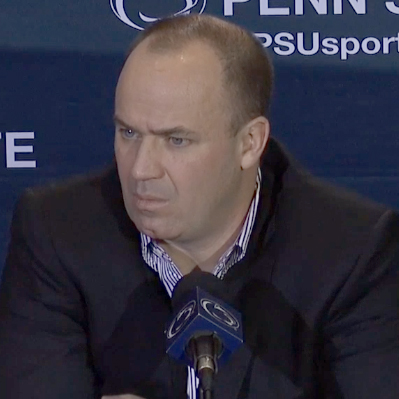 Bill O?Brien is a terrific coach. We saw that in just one season of work at Penn State. He walked into an untenable situation and promptly led a shorthanded team to an 8-4 record (6-2 Big Ten) when most forecast gloom. But, much heavy lifting remains. And O?Brien is going to be around for it.

That has the message hammered home during a press conference today at Penn State, in which O?Brien addressed a variety of issues.

On if a donor had ponied up $1.3 million to get him to stay:

"No. You can ask anyone that knows me; in 20 years of coaching, I have never asked for a raise. The last thing I'm about is money. If I was about money, I probably wouldn't be sitting here. I never asked anybody for a raise. It gets my blood boiling when people say this is about money."

On if he was misled about how severe looming NCAA sanctions would be upon taking the job:

"Let me set the record straight on that; I interviewed with a search committee on Skype, and then came on campus, and I asked many, many questions. It was around that time that [Penn State president] Rodney Erickson had to answer questions from the NCAA, and once we answered those we knew we'd have a better idea.

O?Brien also discussed NFL teams? interest in him as there were reports he interviewed with the Browns and Eagles, and O'Brein said his representative did entertain interest from NFL teams. But, how serious any of the discussions got is conjecture.

Here?s the bottom line: O?Brien will be back. For how long? Who knows? But let?s just worry about today. That?s enough.

Had O?Brien left, it would have been a paralyzing blow to the Nittany Lions, who already are about to feel the full brunt of debilitating NCAA sanctions as a result of the Jerry Sandusky scandal. The most crippling? The loss of 10 initial scholarships for four years beginning in 2013-14. That will drop Penn State?s total number of scholarships from 85 to 65 for four years beginning in 2014-15.

Try competing with the likes of Ohio State, Wisconsin, Michigan, Nebraska and Michigan State with those scholarship limits. It will be almost impossible. The loss of so many scholarships essentially will make the Nittany Lions a FCS program competing on the FBS level.
Sorta like having, say, Youngstown State play a full Big Ten schedule. Penn State may be able to compete from time to time. But attrition in the form of injuries and transfers likely will take a toll.

There will be many lopsided scores, many ugly losses, many hard times and many long Saturdays. But, believe me, had O?Brien left, things would have been direr.

Who would have coached Penn State? It would have been difficult to have lured someone of O?Brien?s quality from the outside. More likely, Penn State probably would have promoted from within, with the likely candidates being defensive line coach Larry Johnson, linebackers coach Ron Vanderlinden or defensive coordinator Ted Roof.

But also remember that O?Brien was the one who ran the offense and called the plays. Who would have taken over those duties? It was that offense that made Penn State special this season.

It?s all moot now with O?Brien back. But what makes having him back so delicious for Penn State is the fact his staff also is back. And, it may be the top staff in the Big Ten. There are few better than Roof, Johnson, Vanderlinden, receivers coach Stan Hixon, offensive line coach Mac McWhorter, secondary coach John Butler, quarterbacks coach Charlie Fisher, tight ends coach John Strollo and running backs coach Charles London.

O?Brien and his coaches know how to practice with a short roster, as years in the NFL prepared O?Brien for working with truncated numbers. There also are a lot of wise minds-Roof, McWhorter, Johnson, Vanderlinden, Fisher. Rest assured: This group will maximize the talent on hand-no matter how limited. They also will develop a strong walk-on program built on the bedrock Pennsylvania kids.

And, it?s an authentic sales pitch coming from O?Brien. His actions speak louder than words. Recruits see his commitment. Why not give theirs?

In this day and age, we see ?loyalty? uttered often by coaches, but it's rarely acted upon. Well, O?Brien is an exception. He did the right thing, pledging his allegiance to a sickly Penn State program that many would have turned their backs on in lieu of NFL glory and millions.

O?Brien knows he can be part of something greater than a national championship, Big Ten crown or fat bank account. And, his actions are showing that. He can be part of the rebuilding of one of the greatest programs in college football history. Kids can?t deny that.
No matter how the next four or so years go, O?Brien?s name never will be forgotten in bucolic State College, Pa. And his willingness to stand by the school?s side during these coming dark days will mean as much as anything that went on at Beaver Stadium in the previous 50 years.