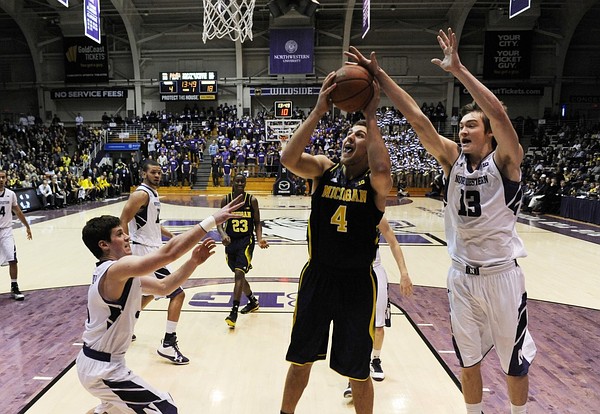 Trey Burke scored 23 points and grabbed four rebounds and Jordan Morgan added 12 points and 13 boards as they teamed up to lead No. 2 Michigan to a 94-66 victory  over Northwestern on Thursday at Welsh-Ryan Arena in Evanston.

FINAL: Michigan (14-0) shot 60 percent from the field (34-of-57). The Wolverines were hot from long range, hitting 13-of-22 threes for a 59 percent night from beyond the arc. Michigan was tough on the offensive boards, grabbing 13. Tim Hardaway Jr. had a quality shooting game, nailing 6-of-8 shots from the field and scoring 21 points. The Wolverines also got double-digit performances from Nik Stauskas and Glenn Robinson III, who each scored 10. Jared Swopshire scored 11 points, grabbed five rebounds, and handed out four assists for Northwestern (9-5) in the game.

The Wildcats tallied 18 assists on 24 baskets. Northwestern also got solid contributions from Kale Abrahamson (11 points) and Alex Olah and Tre Demps, who each scored 10. Michigan won the rebounding battle en route to victory, pulling down 44 boards to 29 for the Wildcats. The Wolverines never trailed in the game. Michigan's largest lead was 32, which came with 3:24 remaining. The Wolverines led 39-25 in the first before they widened the margin to 24 points with a 12-2 run that ended late in the first. Burke capped the run off with a field goal that helped the Wolverines lead 51-30 at the half.