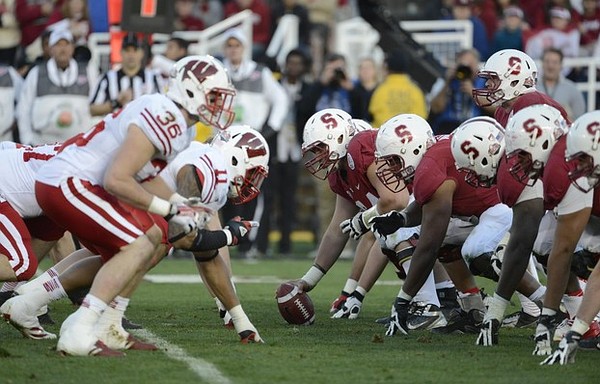 As we stand in the aftermath of another disappointing Big Ten bowl season (2-5 record with a 1-4 mark on New Year?s Day), we are left to wonder how the conference would have fared if Ohio State and Penn State had been eligible. OK, that?s long enough.

Regardless of what might have been, the Big Ten held its own against some good teams, including Georgia, Stanford and South Carolina. And it came very close to beating them.

The great Greg Couch of the Lansing State Journal thinks the Big Ten?s postseason effort shows the conference doesn?t merit the bashing so many love to administer.

That?s three Rose Bowl losses in a row and counting for Wisconsin, following a 20-14 defeat to Stanford. Tom Oates of the Wisconsin State Journal says that not even having Barry Alvarez on the sidelines could hide the Badgers? shortcomings.

What are those shortcomings? Namely, an offense that lacked juice, firepower and big-play ability. In the end, this is an 8-6 team, with the defeats coming by a total of 25 points. And the Badgers were 2-6 in games decided by seven points or less. Conversely, Stanford was 8-2 in such games and 12-2 overall.

A big reason for Wisconsin?s struggles vs. Stanford: It couldn?t get Montee Ball rolling.

Michigan has to still be scratching its head over inexplicably yielding a game-winning 32-yard touchdown pass with 11 seconds left in an Outback Bowl loss to South Carolina. But, it?s over. And the Wolverines have ended one era and move on to another. Kyle Meinke of MLive.com thinks Michigan has a lot to worry about.

Meinke notes that Michigan flips the script to 2013 with an answer at quarterback. But after chewing up lesser opponents, it's clear Devin Gardner, who moved back to quarterback from receiver after Denard Robinson sustained an elbow injury Oct. 27, is not a finished product. Michigan also must find a way to beat good teams, after falling to the likes of Alabama, Notre Dame, Nebraska, Ohio State and South Carolina. Beating teams you are supposed to beat can only take a school so far.

There is no other way to say it: Nebraska fumbled a great shot to beat Georgia and earn the signature win of the Bo Pelini era in the Capital One Bowl. Now, Dirk Chatelain of the Omaha World-Herald says the Cornhuskers face another uncomfortable offseason.

?It's just weird,? offensive coordinator Tim Beck said. ?You play against these great football teams and this conference and the speed and athletes they have and you see you're a play or two away from beating them. …

Chatelain wonders if there is a systemic flaw in the way Pelini and his staff operates. Why do the same weaknesses pass from team to team like a bad gene? Pelini will ask himself those questions - and several others - over the next few months.

Why not? No sense in getting negative. The Huskers almost beat a team that came close to playing for the national title. Still, in the aftermath of the second-half collapse in the Capital One Bowl, many wondered how the Huskers can get over the proverbial hump with Year Six of the Pelini era on deck.

Yes, it really is that simple.

Iowa wasn?t in a bowl, but Kirk Ferentz still is making some headlines as a potential candidate for the Kansas City Chiefs job in what has become an annual rite. But, Ferentz is saying nothing-and that?s smart, says Pat Harty of the Iowa City Press-Citizen.

Harty thought there was about a 50-50 chance that Ferentz might give the NFL a shot. Now? Not likely, since Kansas City G.M./Ferentz buddy Scott Pioli won?t be the one doing the hiring. I wonder if Ferentz would have gone, anyway. I think he wants to clean up things in Iowa and get the program rolling again.

Minneapolis Star-Tribune Gophers hoops beat writer Amelia Rayno opens her mail bag to answer some vexing queries. Among them: Which player is the most important to the Gophers? Who are the Big Ten hoop player of the year candidates? And, most important: What?s the difference between Yeti and Sasquatch?

OK, Illinois fans: What were the biggest stories of 2012? Glad you ask, because Jeff Huth of the Champaign News-Gazette has the top 12 right here. No. 1: The firing of Bruce Weber. I?m not gonna argue that. I agree. And you should, too.

Welcome to the Michigan offseason and to Day 1 A.D. — After Denard.

My take: I, frankly, am looking forward to the new era and fresh approach. I want to see what Al Borges can do with his type of QB for a full season. We saw some glimpses with Devin Gardner.

Iowa?s 2013 schedule will include nine bowl teams and 12-0 Ohio State. Five of those games will be at at Kinnick.

My take: This is the definition of ?heavy lifting.?

My take: Sobering. That?s all I?m gonna say about that.

Northwestern is the first Big Ten team in the BCS era to defeat two SEC schools in the same season.

My take: Take a bow, Fitz! Northwestern knocked off Vandy and Mississippi State.

#Purdue DB Ricardo Allen: "We embarrassed Purdue and we embarrassed our community. My offseason starts tomorrow."