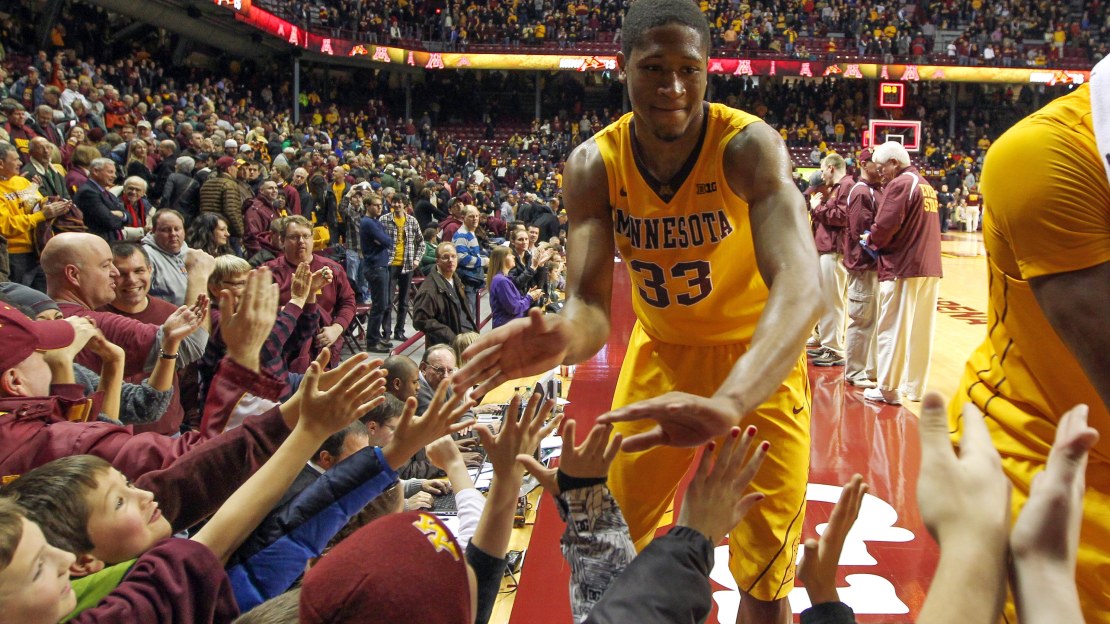 Andre Hollins had 22 points and six assists and Rodney Williams added 15 points and six rebounds to lift No. 9 Minnesota to a 76-63 victory over No. 18 Michigan State on Monday. Trevor Mbakwe had 11 points and 12 rebounds and the Golden Gophers (13-1, 1-0 Big Ten) shot 56.6 percent to open conference play with an emphatic victory over a team that has owned them for years.

Minnesota slammed the door with an 18-2 run over the final seven minutes in front of a euphoric Williams Arena crowd.

Adreian Payne grabs board and slams it home:

Austin Hollins cuts, throws it down:

Oto Osenieks throws it down:

FINAL: Andre Hollins scored 22 points, grabbed three rebounds and handed out seven assists to help No. 14 Minnesota past No. 19 Michigan State 76-63 on Monday at Williams Arena. Trevor Mbakwe scored 11 points, hauled in 12 rebounds, and knocked down 5-of-7 shot attempts for Minnesota (13-1). The Golden Gophers hit 58 percent of their field goals (30-of-52) and grabbed 17 offensive rebounds. More Minnesota scoring came from Austin Hollins (12 points) and Rodney Williams Jr. (15 points). Denzel Valentine had five points, grabbed six rebounds, dished out five assists, and shot 2-of-2 from the field for Michigan State (11-3) in the loss.

HALFTIME: No. 18 Michigan State pulled closer to No. 13 Minnesota going into the break, thanks to a 13-2 run late in the half, and now trails the Golden Gophers 39-38. Things could be worse for the Spartans as Minnesota led by as many as 12 in the first. The Golden Gophers have been effective inside, making 15-of-21 two-point field goals, and have hit 2-of-6 from three-point range. Seven Minnesota players have scored, led by Andre Hollins and Rodney Williams' eight point apiece.