Ranking the games: The best of the rest of opening week 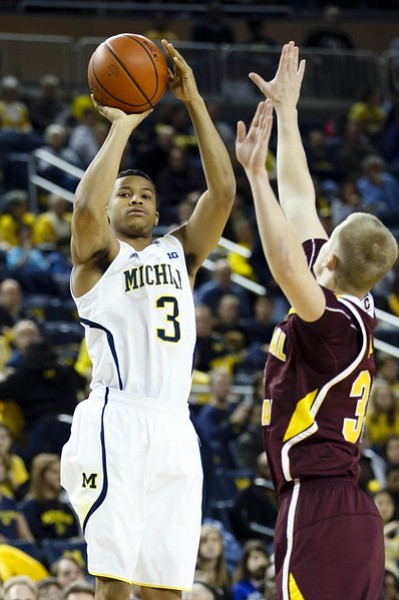 The start of conference play began on Monday with two key matchups: Michigan State at Minnesota and Indiana and Iowa. But more interesting games loom this week, including Ohio State at Illinois and Iowa at Michigan. Here?s my ranking of the week?s games.

1. Ohio State at Illinois, Saturday. One team can?t shoot (Ohio State) and the other can-and probably does too much (Illinois). These teams played a classic last year in Champaign, when Brandon Paul drained 43. This will help set the early pecking order in the conference.

2. Iowa at Michigan, Sunday. This deep Hawkeyes team has flashed potential in the non-conference. But to take the next step, it must play better defense. And the Wolverines will put Iowa to the test on that end of the court.

3. Michigan at Northwestern, Thursday. The No. 2 team in the nation, the Wolverines can score in a variety of ways and will stress a Wildcats team that has had some issues defending. Still, this could be a trap game for Michigan vs. an always well-coached NU squad that plays in cozy Welsh-Ryan Arena. 4. Illinois at Purdue, Wednesday. The Fighting Illini have been one of the most surprising teams in the nation, firing up a flurry of 3-pointers to make themselves relevant under first-year coach John Groce. The Boilers? They struggle to score and commit too many turnovers.

5. Northwestern at Minnesota, Sunday. The deep Gophers are loaded with speed and athletic ability. And they are deep. If the Wildcats hope to win in the tough Williams Arena environment, they will need to produce in the paint get production from Reggie Hearn and Dave Sobolewski.

6. Purdue at Michigan State, Saturday. The turnover-prone Boilermakers are nowhere near ready for a trip into the suffocating Breslin Center. Even worse: The Boilers get up-close looks at two Indiana natives they wanted-but didn?t get-in Branden Dawson and Gary Harris.

7. Nebraska at Ohio State, Wednesday. The schedule-makers haven?t done the Cornhuskers any favors, as Nebraska plays three of its first four games on the road. The Buckeyes? talent will overwhelm Nebraska.

8. Penn State at Wisconsin, Thursday. The Badgers are still looking for an answer at the point since losing Josh Gasser. But Wisconsin?s trademark defense-and the home court-should mean victory vs. a Tim Frazier-less Penn State club.

9. Wisconsin at Nebraska, Sunday. Dylan Talley and Brandon Ubel are nice players for the Huskers, but do they have enough on the offensive end to beat the always-rugged Badgers?