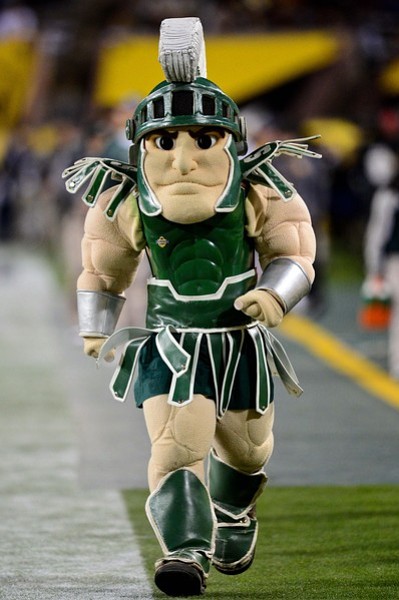 1. Michigan State may have gotten a peak at its future in redshirt freshman quarterback Connor Cook. He led the Spartans to a game-winning 47-yard field goal by Dan Conroy late in the fourth quarter in place of starter Andrew Maxwell. Cook also came on late in the third quarter and engineered a 90-yard touchdown drive to cut TCU?s lead to 13-7. Prior to that drive, Michigan State had 100 yards of offense. Not bad for a guy who had thrown six passes all season entering the game. Cook finished just 4-of-11 for 47 yards and a score for an attack that had just 249 yards vs. a strong TCU defense. Still, he showed promise. Given how the offense has struggled all season, Cook figures to challenge Andrew Maxwell for starting duties in the spring. Cook brings a bit more athletic ability to the attack.

2. The Spartan defense continued to do its job. The unit entered the game No. 1 in the Big Ten in total defense; No. 1 vs. the run; No. 1 in scoring. On this night, Michigan State allowed just 288 yards, with TCU averaging only 2.9 yards per rush. And MSU allowed just three points in the second half after trailing 13-0 at intermission. And we can?t go without mentioning Spartans punter Mike Sadler, who booted the ball 11 times for 481 yards (three inside the 20-yard line and a 43.7-yard average) and saw one of his offerings muffed to set up a go-ahead touchdown in the fourth quarter.

3. Was this the last time we will see running back Le?Veon Bell in a Spartans uniform? If so, the junior went out with some style by rushing 32 times for 145 yards, the most allowed by TCU to a back all season. It was the eighth time this season and 12th time in his career that Bell eclipsed the 100-yard mark. Bell also hit a big pass for 29 yards to help set up Michigan State?s first touchdown of the game en route to finishing with 187 yards and helping MSU to back-to-back bowl wins for the first time since 1989-90.

FIRST QUARTER: TCU's defense shut down Michigan State, allowing only 29 yards of offense in the first quarter and the Horned Frogs lead 7-0 at the end of the first quarter. TCU stuffed the run, giving up just 21 yards on the ground in the quarter. The Horned Frogs got on the scoreboard first, rattling off an eight-play, 73-yard drive that ended in a score when Matthew Tucker pounded in a four-yard touchdown run. TCU threw just one time during that series. The Horned Frogs are knocking on the door to begin the second quarter, with the ball on the Spartans' 19-yard line.

Most predictions I saw for the Buffalo Wild Wings Bowl forecast a low-scoring game. First team to 17 may win. #Spartans #TCU

SECOND QUARTER: Jaden Oberkrom banged home two field goals, and TCU now leads 13-0. The Horned Frogs held Michigan State to just 26 yards passing during the quarter. TCU opened up the lead, 10-0, after Oberkrom drilled a 47-yard field goal to end a six-play, 50-yard drive. The key play on the Horned Frogs' drive was Trevone Boykin's 59-yard pass to Kolby Listenbee. TCU made its lead 13-0 when Oberkrom kicked a 30-yard field goal on the last play of a seven-play, 83-yard drive. The Horned Frogs' drive was highlighted by Boykin's 61-yard pass. TCU will have possession to start the second half.

THIRD QUARTER: In the third quarter, Aaron Burbridge fought back for Michigan State. He caught a 15-yard touchdown pass, but the Spartans have closed the gap to 13-7. Michigan State closed the gap to 13-7 when Connor Cook threw a 15-yard touchdown pass to Burbridge to clinch a 90-yard drive. TCU will start the fourth quarter with the ball at its own 27-yard line.

FOURTH QUARTER: Michigan State trailed by 13 points earlier in the game, but came all the way back to take the lead over TCU, and held on for a 17-16 win. The Spartans trailed by that margin with 4:01 left in the second, but took back the momentum, and eventually the lead. Le'Veon Bell's four-yard touchdown run gave Michigan State the lead, 14-13, and was the final play of a two-play, four-yard drive. The Spartans began the drive with good field position after Michigan State recovered a fumble. Jaden Oberkrom's 53-yard field goal put the Horned Frogs on top 16-14, putting a bow on a five-play, 28-yard drive. Dan Conroy's 47-yard field goal gave the Spartans the lead for good, 17-16, after a seven-play, 45-yard drive. Michigan State's Bell topped 100 yards rushing for the game in the quarter, and finished his day with 145 yards on the ground. TCU's Trevone Boykin hit 200 yards passing for the game in the quarter, part of his 201-yard passing performance.