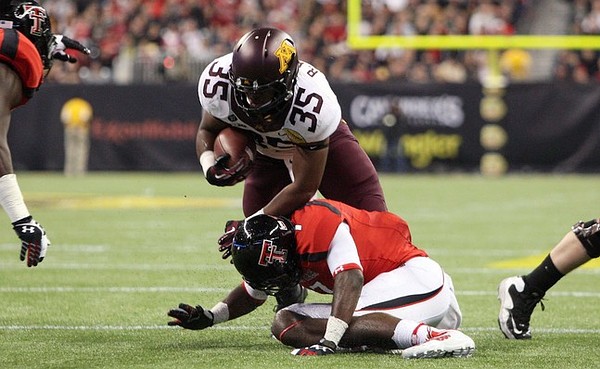 D.J. Johnson returned an interception 39 yards and Ryan Bustin made a 28-yard field goal as time expired to give Texas Tech a 34-31 comeback victory over Minnesota on Friday night in the Meineke Car Care Bowl. Seth Doege found Eric Ward on a short pass, and he outran a defender for a 35-yard scoring play to tie it at 31 with just more than a minute remaining. Read three things BTN.com senior writer Tom Dienhart spotted about the Golden Gophers while monitoring this bowl game, plus see video highlights and quarter0by-quarter recaps in this post.

1. Minnesota finished the season by going 2-7 after a 4-0 start. Think about that. The Red Raiders had no business winning this game, committing 13 penalties and two turnovers. And Minnesota won the time of possession battle, 36:18 to 23: 42. No matter, Tech notched 429 yards and converted 8-of-14 third downs. And a 99-yard kickoff return for a touchdown in the first quarter proved to be huge for the Red Raiders.

2. The Gophers have to be encouraged by the effort of their offense, even though it failed time and again to build on a 31-24 second-half lead. This was a Minnesota attack that ranked No. 10 in the Big Ten (317.5 ypg) entering the game. And the Gophers were ninth in scoring (21.3 ppg). So the 368 yards (222 rushing) and 31 points were an offensive explosion. Still, when the attack had a chance to build on a fourth-quarter lead, it punted three times in a row before the late interception.

3. Quarterback Philip Nelson showed some flashes as a true freshman, but he still has room to improve. Witness his killer interception late in the game that set up the Red Raiders? game-winning field goal. Nelson hit 7-of-18 passes for 138 yards with two touchdowns and that critical pick. (He and MarQueis Gray combined to hit just 8-of-19 passes for 146 yards.) Expect Mitch Leidner, a freshman who redshirted, to compete for the job. Still, Jerry Kill has this program pointed in the right direction in its first bowl since 2009.

FINAL RECAP: The Meineke Car Care Bowl game between Texas Tech and Minnesota came down to the final play as Ryan Bustin kicked a 28-yard field goal as time expired to clinch a 34-31 victory on Friday at Reliant Stadium. The teams combined for a total of  802 total yards.

Seth Doege and Eric Ward had a passing connection going, as Ward racked up 79 yards and one touchdown on seven catches en route to a win for the Red Raiders. A lone bright spot for the Golden Gophers was Philip Nelson, who made enough good throws to finish with 138 passing yards. He was seven for 16 on pass attempts and tossed two touchdowns. Texas Tech's Doege was good for 271 yards during the game, completing 31 of 45 passes. Doege tossed one touchdown and two interceptions. Darrin Moore hauled in 11 catches for 84 yards.

The Golden Gophers finished with 373 total yards, including 146 yards passing while completing eight of 19 attempts. Minnesota's rushing attack also contributed 227 yards to the total, with the tally coming on 54 carries.

FIRST QUARTER: Rodrick Williams led Minnesota in the quarter. He ran for 21 yards and one touchdown, but the Golden Gophers trail 14-10 at the end of the first quarter. Minnesota scored when Jordan Wettstein drilled a 41-yard field goal to polish off an eight-play, 74-yard drive, giving the Golden Gophers the game's first lead. Minnesota threw just two times on that possession. Williams' two-yard touchdown run finished off a five-play, 67-yard drive and gave the Golden Gophers the lead, 10-7.  Gave Texas Tech the lead 14-10 after a four-play, 75-yard drive. Minnesota is in a prime position for points at the Red Raiders' 10-yard line to open the second quarter.

SECOND QUARTER: In the second quarter, Texas Tech's Seth Doege stood out. He threw for 91 yards and ran for four yards and one touchdown, and the Red Raiders now lead 24-17. Texas Tech has erupted for 10 straight points. Donnell Kirkwood's three-yard touchdown run finished off a nine-play, 48-yard drive and gave Minnesota the lead, 17-14. The Golden Gophers began the drive with good field position after Troy Stoudermire's big kickoff return. Minnesota plodded along, gaining no more than eight yards on every play.

THIRD QUARTER: Minnesota's Philip Nelson threw for 56 yards and one touchdown and ran for 20 yards in the quarter, and the two teams are tied 24-24 at the end of the third. The Golden Gophers tied the score at 24 apiece after Nelson threw a 17-yard touchdown pass to Devin Crawford-Tufts to put a bow on a six-play, 53-yard drive. Minnesota will start the fourth quarter with the ball on Texas Tech's 43-yard line.

FOURTH QUARTER: With 5:06 remaining in the fourth quarter, the Red Raiders trailed big, but Texas Tech fought back to regain the advantage. The Red Raiders went on a 10-point run to close the game. Philip Nelson and Drew Goodger combined for a one-yard touchdown to break the 24-24 standstill in favor of the Golden Gophers. The play finished off an eight-play, 79-yard scoring drive. The key play on Minnesota's drive was Nelson's 42-yard pass to Derrick Engel. Texas Tech tied the score at 31 apiece after Seth Doege threw a 35-yard touchdown pass to Eric Ward to cap a seven-play, 82-yard drive.

The Red Raiders broke the 31-31 stalemate when Ryan Bustin made a 28-yard field goal to finish off a three-play, 11-yard scoring drive. Texas Tech started in good field position at the Minnesota 22-yard line when D.J. Johnson intercepted Nelson's pass. Doege clinched a 200-yard passing game with 101 in the quarter, part of his 271-yard day for the Red Raiders. The Golden Gophers' Engel hit 100 yards receiving for the game in the quarter, part of his 108-yard, four-reception performance.