Wisconsin puts it on Milwaukee, 74-53 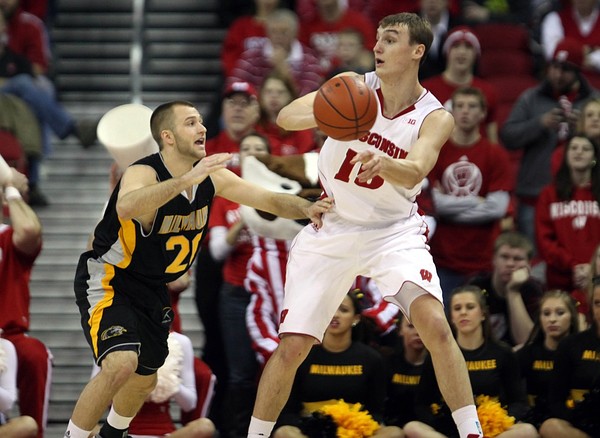 Ryan Evans scored a season-high 19 points, Ben Brust opened and closed a 17-1 first-half run with 3-pointers and Wisconsin routed Milwaukee 74-53 on Saturday night at the Kohl Center. Traevon Jackson added a career-best 13 points and Jared Berggren had 11 as Wisconsin (8-4) beat its state rivals for the 20th consecutive season and improved to 29-1 in the teams' all-time series.

Jared Berggren dunks right out of the half:

FINAL: Ryan Evans scored 19 points to lead Wisconsin to a 74-53 win over Milwaukee on Saturday at the Kohl Center in Madison. Ben Brust was 3-of-5 from the floor and chipped in eight points for Wisconsin (8-4). The Badgers shot 48 percent from the field (28-of-58), including 44 percent from distance (7-of-16). The Badgers also got double-digit efforts from Jared Berggren (11 points) and Traevon Jackson (13 points).

HALFTIME: Wisconsin leads 41-18 at halftime after locking down Milwaukee's offense, holding the Panthers to 30 percent shooting and just seven field goals. Milwaukee went into a funk with the score 27-15, going 5:10 without a point while the Badgers went on an 11-0 run to open up a 23-point lead.Ryan Evans scored 11 points and Ben Brust chipped eight for Wisconsin, which shot 52 percent, including 42 percent from downtown.