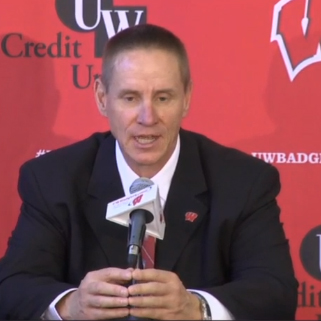 Gary Andersen sounded like a confident and prepared coach. Soon, he?ll get the chance to prove it, as he was introduced today as the new Wisconsin coach.

?This is an exciting day for the Badger football program,? said Wisconsin athletic director Barry Alvarez. ?I believe we did our due diligence and have the right fit.?

And with that, the Andersen era has begun following the shocking departure of Bret Bielema to Arkansas on Dec. 4, just days after leading the Badgers to a 70-31 win over Nebraska in the Big Ten title game.

Now, following a search that took less than two weeks and saw Alvarez meet face-to-face with three candidates, Andersen is the guy. In fact, news broke on Tuesday that he was the choice of Alvarez, who said Andersen was the only one offered the job.

?When Coach offered me the job, I just said ?yes?, said Andersen. ?I think I shocked (Alvarez). I didn?t ask any questions.?

Andersen said all of the right things on this day, as he walks into one of the top jobs in the Big Ten. But challenges loom.

This job will be different than the Utah State post Andersen took over in 2009. Back then, Andersen walked into a moribund situation in Logan, Utah, inheriting a team from Brent Guy that was coming off a 3-9 record and hadn?t been to a bowl since 1997. Andersen proceeded to go 4-8, 4-8, 7-6 and 11-2 with two bowls. Now, he?s off to Wisconsin.

?As I explained to people, he?s a ball coach,? said Alvarez, who will coach the Badgers in the Rose Bowl. But Andersen will be in Pasadena, too, to watch and observe.

Expectations will be high. Very high. In fact, the 48-year-old Andersen may face a greater task than when Alvarez took over a broken Badgers program from Don Morton in 1990–and when Bielema assumed command in 2006 as Alvarez?s hand-picked successor.

[RELATED: Andersen will take back seat during Rose Bowl. ]

This is a program that?s coming off three consecutive Rose Bowl trips, which hasn?t been done by a Big Ten school since Michigan turned the trick after the 1976-78 seasons. It will be Andersen?s job to continue to feed that beast. In case you are wondering: The last coach to win the Big Ten in his first season was Gary Moeller in 1990 with Michigan.

Making Andersen?s maiden voyage a bit easier, perhaps, will be a roster that is full of veteran talent. Players like tight end Jacob Pedersen, quarterback Joel Stave, wideout Jared Abbrederis, running back James White and a gaggle of top defenders like linebacker Chris Borland, tackle Beau Allen and end David Gilbert, among others, will be back. In fact, Bielema had said before leaving that the 2013 Badger team had more talent than any he ever had in Madison.

The schedule has its challenges but is manageable with no games vs. Michigan, Nebraska or Michigan State. The non-conference slate has home games vs. UMass, Tennessee Tech and BYU, as well as a trip to Arizona State. The Big Ten menu features home games vs. Purdue, Northwestern, Indiana and Penn State, with road games at Ohio State, Illinois, Iowa and Minnesota. Next up: building a staff.

Andersen talked a lot about caring about the players and academics. He lavished praise on Wisconsin?s facilities and traditions. No doubt: Andersen brings the requisite skill set to Madison to keep the momentum going. In fact, he fits most of the criteria that Alvarez desired in a coach in this particular search.

Andersen is a proven head coach who has a defensive background. He also is a proven and energetic recruiter who will embrace the football culture at Wisconsin.

But there are two concerns.

But, look: Wisconsin is Wisconsin. Andersen wouldn?t have this job if he didn?t agree to maintain the run-oriented style Alvarez first implemented. It?s a tough, physical brand of football that features massive offensive linemen, with a steady diet of runs setting up what typically is a deadly play-action passing game. Andersen is adaptable. He?s no dummy. He will embrace the culture that has been engrained the past 20-plus years in Madison. But look for a few tweaks, as Andersen said he wants to sprinkle in some option.

?We will be a power-run team, we'll use tight ends, we'll use multiple sets and formations,? said Andersen. ?The mind-set is to run first, out-tough you.?

2. Recruiting. Aside from a stint in 1988 coaching at Southeastern Louisiana, Andersen has spent his entire career out west. He?s a Salt Lake City native who played at Utah. Andersen also has coached at Ricks JC in Idaho, Park City High in Utah; Northern Arizona, Southern Utah, Utah and Utah State. Bottom line: Andersen has no connections to the Midwest, where the Badgers get most of their talent. Nor does Andersen have connections to the south or northeast, which also have been fruitful recruiting regions for Wisconsin.

But Andersen is adept at building and cultivating relationships-and that?s what recruiting is about. Plus, he has a heck of a product to sell and will build a staff to help get him into living rooms.

Another potential hurdle: Ohio State, a Leader Division heavy. The Buckeyes will be coming off probation in 2013 with a boat-load of momentum following a 12-0 debut by Urban Meyer. Ironically, Andersen and Meyer have a close relationship. Andersen was Meyer?s defensive line coach on the 2004 Utah squad that went 12-0 and was the original BCS buster. And he looks forward to the completion with Meyer and everyone else in the Big Ten, where eight of 12 coaches will be in their third year or less next season. His task is to take Wisconsin to the next level, making it nationally prominent each year and a title contender. And Andersen thinks he has the resources in Madison to do it.

?If you ask coaches to draw up top 20 programs, I guarantee Wisconsin will be on 99.9 percent of lists,? said Andersen.
Andersen went 26-24 in four seasons at Utah State, forging a 16-13 record in WAC play after inheriting a program that hadn?t been to a bowl since 1997 nor had a winning season from 1998-2010.

Andersen-who also was pursued by Kentucky, Colorado and Cal for their openings this offseason–took the Aggies to bowls each of the past two seasons, leading Utah State to a 41-15 win over Toledo in the Famous Idaho Potato Bowl on Saturday to cap an 11-2 season as WAC champion. It was the greatest season in school history. Now, it?s on to other challenges for Andersen.

?At the end of the day, it's not the buildings but the people inside the buildings that makes this place special,? said Andersen.

And it all starts with Andersen.

Here are some tweets from Thursday:

Andersen on Urban: He thought it was a great job. But said 'You have to come play us.'

Andersen is interested in retaining some Wisc. assistants. He will look for an OC.He will bring 3-4 assts from USU and look for others.

Alvarez: "Exciting day for #Badgers football program. Would like to officially welcome Gary Andersen and his family. Welcome to our family."

Andersen didn't have to make a pitch to me. I wasn't shocked. I was excited. He will be at the Rose Bowl with some of his coaches.

Utah State coach Gary Andersen called every one of his players after news broke, going to #Badgers. Took till 2:30 am. 106 calls or so.