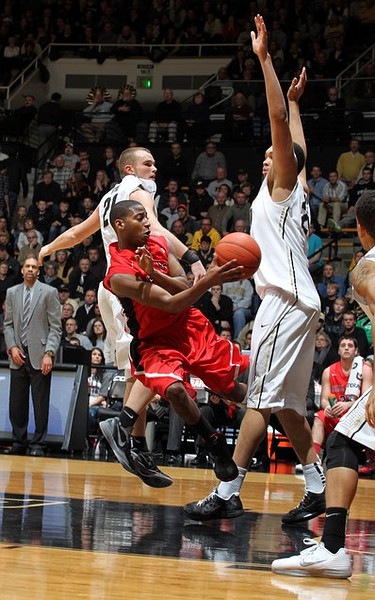 Purdue struggled to shake the Cardinals, but a late run put the game away. A loss would have guaranteed the Boilermakers a losing nonconference record.

FINAL: Jesse Berry scored 22 points, but it wasn't enough to lead Ball State past Purdue, as Cardinals fell 66-56 on Tuesday at Mackey Arena. A.J. Hammons sparked Purdue (5-6), as he contributed 15 points and knocked down 6-of-8 shot attempts in the win. D.J. Byrd had a quality shooting game, nailing 4-of-6 shots from the field and scoring 11 points. The Boilermakers shot 17-of-25 from the free throw line. Purdue also got double-digit contributions from Terone Johnson (14 points) and Ronnie Johnson (11).

HALFTIME: A.J. Hammons has 10 points to lead Purdue to a 27-21 lead over Ball State at the end of the first half. The Cardinals led 11-10 when the Boilermakers went on an 8-0 run to take a seven-point lead, one it held the rest of the half. Terone Johnson scored six point for the Boilers, although it came on a 3-of-9 performance from the field.