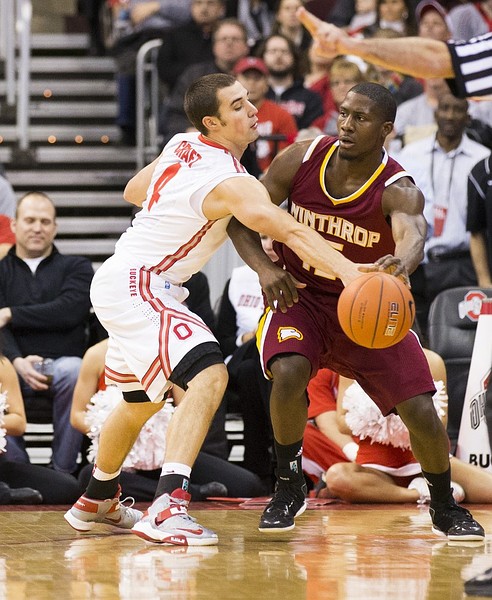 Deshaun Thomas scored 21 points – missing nine straight shots at one point and making five in a row at another – to lead No. 7 Ohio State past Winthrop 65-55 on Tuesday night. It was the last tuneup for the Buckeyes (9-1) before Saturday's rematch with No. 9 Kansas. The Jayhawks beat them twice last year, once at Allen Fieldhouse and then in the Final Four.

Whether Ohio State was looking past Winthrop (4-5) and ahead to Kansas, or whether the Eagles just played well and the Buckeyes did not, the game was in doubt until Thomas got hot.

Lenzelle Smith Jr. added 14 points for the Buckeyes, who have won four in a row.

FINAL: Deshaun Thomas scored 21 points, pulled down nine rebounds and dished out four assists to lead No. 7 Ohio State to a 65-55 win over Winthrop on Tuesday at Value City Arena in Columbus. Ohio State (9-1) struggled from the floor, shooting 39 percent (22-of-57), and also got a double-digit contribution from Lenzelle Smith, Jr., who scored 14.

HALFTIME: Lenzelle Smith Jr. has 10 points to lead No. 7 Ohio State to a 31-30 lead over Winthrop at the end of the first half. Evan Ravenel and Deshaun Thomas each chipped in with seven points for the Buckeyes, who struggled in the first 20 minutes. Winthrop made it rain from long range, shooting 45 percent (5-of-11) from three-point land. Seven Winthrop players have scored, paced by Derrick Henry's five points.