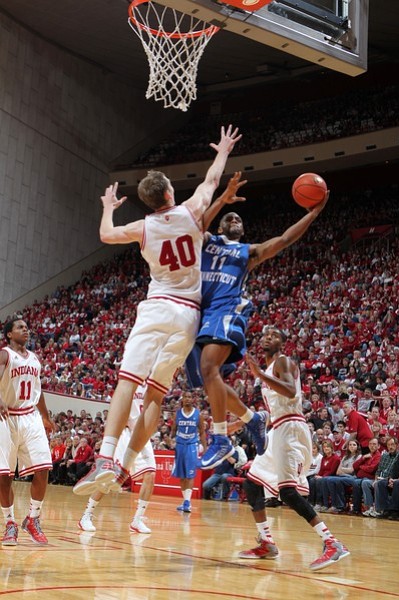 This week?s slate is extremely light, so rather than dwelling on the few results we do have (Minnesota handling North Dakota State in impressive fashion, Illinois struggling with yet another low major), let?s delve deeper into a subject that will play a major factor in the Big Ten race: Indiana?s defense.

Indiana was the preseason No. 1 because of its offense. The Hoosiers scored very efficiently last season and returned all the major pieces. Indiana?s offense has indeed been outstanding, but it is on the defensive end where major strides have been made–last season?s Hoosiers finished 64th nationally in adjusted defensive efficiency, while this season?s edition is currently seventh. What has changed?

It?s not really proper to compare this season?s unadjusted stats (through nine games) with those of last season (through 36 games), as the level of competition obviously picks up in conference and postseason play. So, let?s slice this down and just look at Indiana?s defensive numbers through nine games.

(Note that, for simplicity?s sake, I?ve just taken an average of Indiana?s stats from each game. This results in small differences from the actual cumulative stats–for example, the effective field goal percentage of each game gets equal weight regardless of how many shots were taken in that game. Since I?m taking the same approach for both 2011-12 and 2012-13, those differences shouldn?t change the conclusions.)

At this point last season, Indiana was 9-0 and fresh off its incredible win over Kentucky. The 2011-12 Hoosiers had played a tougher schedule than this year?s version, but the difference is small enough that the comparison is still valid.

A few things jump out. First is the much better job this season?s Hoosiers are doing on the defensive glass. Defensive rebounding was a weakness last year, and it has been a strength this season. We also see that Indiana is forcing fewer turnovers and fouling less. These changes all point to a defense that is focusing less on pressuring the perimeter and more on solid positioning and help defense. If you didn?t know any better, you?d think that Tom Crean had gone full-on Pack-Line.

That?s a major departure from anything Crean has put on the floor previously. In the past 10 seasons, Crean has never had a team finish better than 108th nationally in defensive rebounding percentage (Indiana is currently 22nd).

That is not to say that Tom Crean has never coached a good defense–in fact, his final Marquette squad finished 10th nationally in adjusted defensive efficiency. It?s just that Crean?s better defenses have always been based around pressuring the perimeter. His last two teams at Marquette, led by Jerel McNeal and Dominic James, were excellent at forcing turnovers and limiting three-point attempts. This season, the Hoosiers are letting opponents fire away from deep, though they?ve done a fine job of contesting those shots (opponents are shooting just 26 percent on threes). This is another hallmark of a packed-in approach.

Obviously, a nine game sample is small enough that the specifics of each opponent matter. Indiana has faced only one good offensive rebounding team (North Carolina), whereas last season?s team had faced several such squads to this point. We can?t definitively say that these defensive improvements are here to stay, but the early returns are quite positive for Tom Crean. This Saturday's matchup with Butler, which hits the offensive glass as part of its solid offensive attack, should provide a valuable data point.