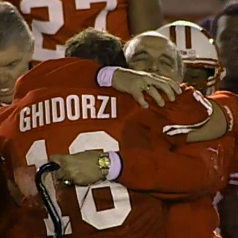 In our latest Big Ten football classic, we've dug up the 2000 Rose Bowl because the two teams involved will sound familiar – Wisconsin and Stanford. We've clipped off a piece of the game here for you to watch. Spoiler alert, Badger fans: It's a touchdown drive. Watch the entire 2000 Rose Bowl game on BTN2Go.

We've got a few other worthwhile video clips in this post. They include a look at Barry Alvarez on "Big Ten Icons" and a complete look at the Badgers' magical 1993 season, too. Watch them all on BTN2Go.

Wisconsin won the 2000 Rose Bowl game against Stanford 17-9 in front of an announced crowd of 93,731 people, and the Badgers became the first Big Ten team to win the Rose Bowl game two straight years. Ron Dayne finished with 200 rushing yards and the game's MVP award.

Here's a look back at the game from UWBadgers.com published in 2010. In this piece by Mike Lucas, there's a great story from Wisconsin's Alvarez, who was thinking about coaching from the press box with his bad knee. Alvarez was up late on New Year's Eve, the night before the game, and watching TV. He saw a report that two of Stanford's best players were expected to play in the game. Both had previously been expected to miss it.

"I knew what Stanford coach Tyrone Willingham was up to. 'He's trying to jack his guys up,' I thought to myself. So I said, 'The hell with it. I'm going to coach from the sidelines.' I needed a cane but I was down on the field with my team. Not that this was the same team that ended the season."

If you're feeling sentimental about Badger football and want to go back further in time, we suggest you watch this episode of "Big Ten Elite" that explores the 1993 Badgers football team. The full episode is on BTN2Go, too. It was a defining moment for Wisconsin football. Here's a clip from that show below.

Finally, BTN's original show "Big Ten Icons" profiled Alvarez and how he rebuilt the Wisconsin football program. Watch a great clip below and find the entire episode on BTN2Go as well.