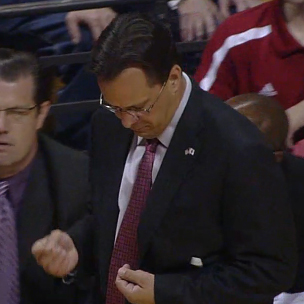 By all accounts, few things went wrong for No. 1 Indiana during its blowout win over Sam Houston State on Thursday night. In Tom Crean's postgame interview with BTN's Jim Jackson, the Indiana coach stressed how his team him with the sustained effort from his team for the entire game. That's why we hope his players didn't give their coach a hard time about one specific mishandling of the gum near the end of the win.

Watch this clip to see what we mean. "Kids at home, you're not supposed to do that, OK?" Jackson said during the broadcast. BTN play-by-play announcer Eric Collins argued that point. "It's the five-second rule," Collins said.

In his own defense, Crean – a good sport – took to Twitter after the game.

The gum I dropped tonight was a fresh piece of Dentyne Ice. No 5 second rule was in effect.

Now, even if it was used, it wouldn't matter. Branch McCracken Court at ASSEMBLY HALL is the cleanest and greatest court around.