Was it the system, or was it JaJuan? 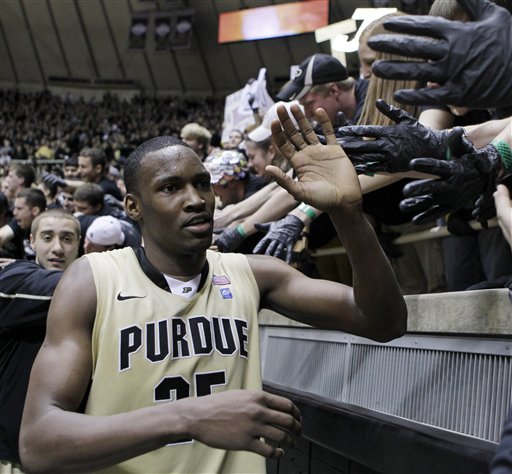 On today's point/counterpoint, we debate whether Purdue's defensive branding is deserved, or just the result of having a very talented defensive player for four seasons.

Point: It was JaJuan.

Purdue has a reputation as a team that gets tough on defense. And at first glance, it?s a well-deserved reputation for the school, and by extension the coach, Matt Painter:

For four seasons from 2007-2011, Purdue finished no worse than the 3rd-best defensive team in the Big Ten. So it?s not hard to make the argument that Painter is at least a capable defensive coach, given the right players. But therein lies the debate-was it all about the players? Those four seasons happen to coincide with the shotblocking force of JaJuan Johnson. Johnson was the best defensive player in the conference over his four-year collegiate career, and it's easy to see why. Not only did he block shots, but he also became a very good rebounder and, best (and rarest) of all, a center that rarely fouled.

With Johnson patrolling the paint, Purdue?s guards were free to overplay to prevent three-point attempts (over Johnson?s career, only Wisconsin permitted fewer three point attempts in the Big Ten), which left opponents with not a lot of great options. Either they could take their chances with Johnson (who swatted around seven percent of two pointers attempted, and altered much more than that), force a contested three-pointer, or settle for mid-range jumpshots (the worst shot in the game). It?s easy to see why the net result was a fantastic defense.

But last year, without Johnson?s talents, the defense fell apart. Indeed, outside Johnson?s time on campus, Painter?s defenses have been average to mediocre. And while Painter put together a fine offense last season, powered by the sort of low-turnover ball that you would expect from Robbie Hummel, that?s unlikely to be the case this season. This season, Purdue is going to rely on a freshman point guard and a lot of unproven talents on offense. The Boilermakers are unlikely to repeat on last year?s offensive efficiency, which means the defense needs to step up in order for them to have a chance at playing in a meaningful postseason tournament. And I?m not sure that Painter?s defensive scheme lends itself to a roster without a legitimate shotblocker, something I think is missing.

Everything you said about JaJuan Johnson is true, but the 2006-07 Purdue Boilermakers might have something to say about your conclusion. That squad, Painter?s second in West Lafayette, got to the NCAA tournament by holding Big Ten opponents under a point per possession, something it accomplished not by blocking shots but by forcing turnovers. 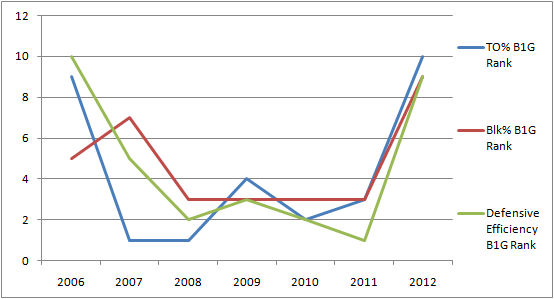 After a first squad that was bad at everything, Painter?s 2006-07 team led the conference in forced turnover percentage, indicated by the blue line (remember, these are ranks, so lower is better). That squad wasn't all that great at blocking shots (as shown by the red line), which is  not surprising for a team led on the interior by Carl Landry (6-7) and Gordon Watt (6-6). Still, all those forced turnovers led to a solid Big Ten defense, one that was good enough to carry Purdue to an NCAA tournament win.

Last season?s Boilers were bad in both respects-they neither blocked shots nor forced turnovers. The result was a defense nearly as bad as Painter?s first season.

So, if Purdue is to challenge for an NCAA tournament bid, the defense will have to start forcing turnovers like it?s 2007. That?s easier said than done, as that campaign was the start of Chris Kramer and Keaton Grant?s four-year run of wreaking havoc on opposing backcourts. The current Purdue roster doesn't seem to have that kind of defensive talent, and the early returns aren't encouraging: Bucknell turned it over on just 12 percent of their possessions in knocking off the Boilers.

Still, Matt Painter has shown the ability to put a good non-shotblocking defense on the floor, albeit six years ago, and he?ll have to rekindle that magic to give Purdue a shot at the NCAA tournament.