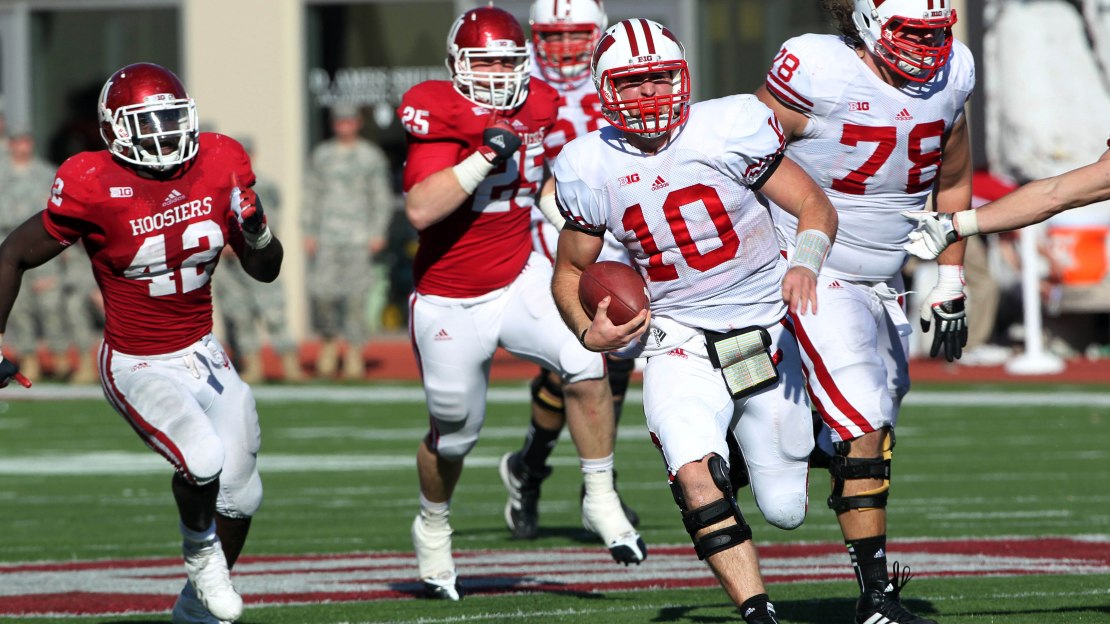 The top of the power rankings didn?t get shaken up, but Wisconsin made a move from No. 6 to No. 4 following its emphatic victory at Indiana that clinched the Leaders Division?s spot in the Big Ten championship game. Where do I have your Big Ten team ranked? Find out in this post.

1. Ohio State (10-0, 6-0). Deep breath, Buckeyes. You need two more wins for perfection. But two big hurdles remain: at Wisconsin and vs. Michigan. Hope you enjoyed your Saturday off. You?ll need to be rested.
Last week: 1
Next: at Wisconsin

2. Nebraska (8-2, 5-1). The Huskers notched a fourth comeback from a double-digit deficit to win 32-23 vs. Penn State. This is a team that?s playing with a lot of confidence and seems to be on a mission with its fourth win in a row. Most vital: Nebraska remains in control in the Legends.
Last week: 2
Next: Minnesota

3. Michigan (7-3, 5-1). The Wolverines showed resiliency in rallying from a 24-14 third-quarter hole to take a 38-31 overtime victory vs. Northwestern to stay in the hunt for the Legends Division title and first Big Ten championship since 2004.
Last week: 3
Next: Iowa

4. Wisconsin (7-3, 4-2). Say ?hello? to the Big Ten championship game representative from the Leaders Division. The Badgers rebounded from a home overtime loss to Michigan State with a dominating 62-14 win at Indiana. It was vintage Wisconsin football, with the Badgers running for a school single-game record 564 yards.
Last week: 6
Next: Ohio State

5. Penn State (6-4, 4-2). The Nittany Lions have now lost two of three games. The defense came apart in the second half and couldn?t thwart the Nebraska running game in a 32-23 loss. Still, nothing can taint what Penn State has done thus far.
Last week: 5
Next: Indiana

6. Northwestern (7-3, 3-3). The 38-31 overtime loss at Michigan was the Wildcats? third Big Ten defeat, which eliminates them from winning the Legends Division because they don't hold the tiebreakers with Nebraska or the Wolverines. Northwestern needs to figure out how not to blow double-digit second-half leads. It now has happened three times, vs. the Wolverines, Nebraska and Penn State.
Last week: 4
Next: at Michigan State

7. Michigan State (5-5, 2-4). The Spartans were off on Saturday. That gave them time to contemplate the near future in a season with recalibrated goals. MSU is 5-5 and needs one more win for bowl eligibility. Those Big Ten title dreams? They died weeks ago.
Last week: 7
Next: Northwestern

[RELATED: How did we do? Week 11 Big Ten picks revisited]

9. Purdue (4-6, 1-5). The Boilermakers ended a five-game losing skid with a 27-24 win at Iowa. The Purdue offense showed life with 490 yards. But best of all: The Boilers kept their bowl hopes alive, needing to win their last two to make it back to the postseason for a second season in a row. And it may happen.
Last week: 11
Next: at Illinois

10. Indiana (4-6, 2-4). Those dreams of advancing to the Big Ten title game from the Leaders Division were crushed in a 62-14 loss to Wisconsin. Offense? Defense? Nothing worked. The Hoosiers still can make it to a bowl with season-ending victories at Penn State and at Purdue, but it?s a long shot.
Last week: 8
Next: at Penn State

11. Iowa (4-6, 2-4). That?s four losses in a row for the Hawkeyes with Iowa falling at home to Purdue, 27-24. Iowa now needs to win at Michigan and vs. Nebraska to get to a bowl. The offense remains off the rails, notching just 264 yards vs. a Boilermaker defense that was struggling.
Last week: 9
Next: at Michigan

12. Illinois (2-8, 0-6). It?s seven losses in a row and counting for the Fighting Illini, who continue to have Titanic offensive struggles. The 17-3 loss to Minnesota was the latest example Illinois has dropped 12 Big Ten games in a row. When will it win again?
Last week: 12
Next: Purdue