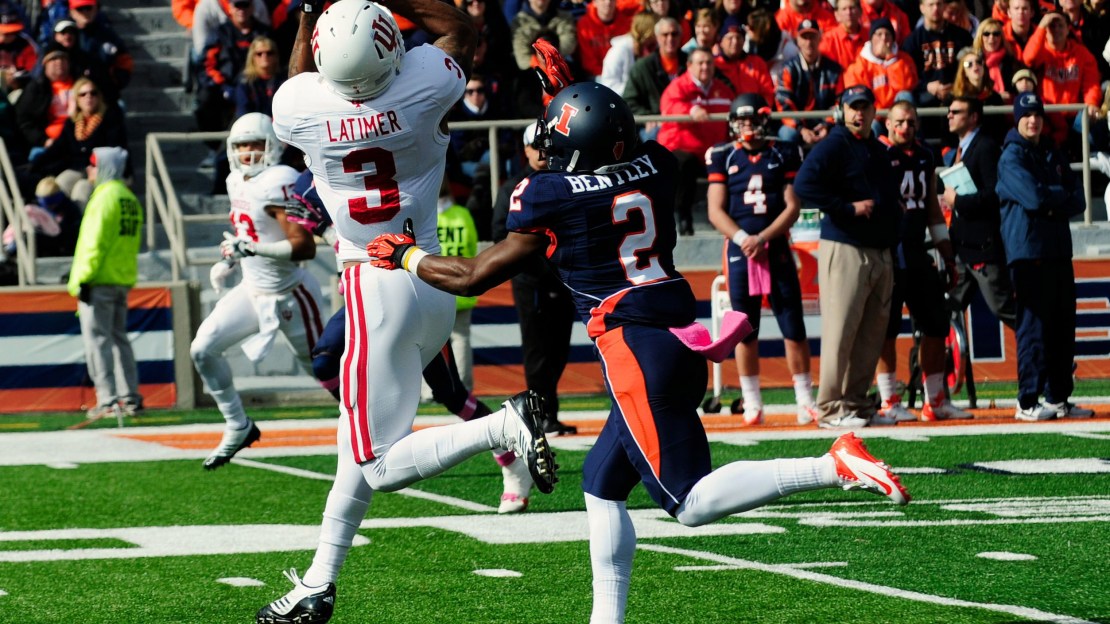 This week's hot topic: Is Indiana really a threat to represent the Leaders in Indy? BTN.com's Tom Dienhart and Brent Yarina discuss it in this post, plus feature your tweets.

Brent: Can Indiana make it to Indy? Yes. Can the Cubs also win the World Series? Of course. There?s a big difference between ?can? and ?will.? I like Indiana?s offense and its defensive effort last week was encouraging, but this is a team that hasn?t won back-to-back Big Ten games since 2007.

Tom: Did someone pick out the marshmallows in your Lucky Charms this morning, Brent?! C?mon! Be positive. Yes, Indiana CAN win the Leaders Division. The Hoosiers have two key elements on their side: 1. A great offense. 2. Mojo. Believe it, Brent!!!

Brent: Ha! It?s hard to be positive or have faith in a program that?s won a total of four Big Ten games the past four-plus seasons. But now because they beat Illinois, a team that has been outscored 194-62 in its last five games, we?re supposed to believe? Heck, they?re still two games behind Wisconsin in the win column! For the non-math majors out there, that's one more win than the Hoosiers have in 12 Big Ten games under Kevin Wilson.

Tom: All legit and valid points, Brent. But have you not been paying attention? Indiana is this close (I?m holding my index finger and thumb an inch apart) to having four more wins. The Hoosiers lost to Ball State, Michigan State, Ohio State and Navy by a combined 10 points. Indiana has been playing well. If it beats Wisconsin on Nov. 10 and can match the Badgers? Big Ten record (say, 4-4), the Hoosiers will go to the Big Ten title game. It isn?t far-fetched. Remember, Wisconsin still has to play Penn State and Ohio State in addition to IU.

Brent: That's great and all, but it's assuming a lot. My problem is, while the Hoosiers have been competitive, people – BTN analysts included – almost are trying to manufacture something with this Hoosiers-to-Indy talk. They control their destiny, yes, but only because they haven?t played Wisconsin yet. That?s the only reason.

Tom: You underestimate the notion of ?controlling your destiny.? That?s what every living being desires. And Indiana possesses it. If you don?t think the Hoosiers can beat Wisconsin, you are delusional. This is an above-average Badger team that just lost its quarterback. Indiana?s hunger, desire and focus can?t be overstated.

Brent: Before we entertain the Wisconsin game, Indiana must beat Iowa. Lose that one, and this potential feel-good story is pretty much dead. Say they beat Iowa, then Wisconsin comes to town, the same program that's won the last seven in the series by a combined score of 354-119, including 83-20 and 59-7 the last two seasons. No, this Wisconsin team isn?t as good as the previous two editions, however it figures to run all over the Hoosiers. It?s almost a certainty, considering it?s averaged 7.7 yards per carry and 335 rushing yards in the last two meetings.

Tom: Your points about the recent Wisconsin-Indiana series would matter if history mattered. And, it doesn?t. Each year is unique upon itself. Past scores and performances mean NOTHING in 2012. Different teams, different dynamics, etc. The fact Indiana even is in this situation is amazing. And it would be fitting in this bizarre Big Ten season to have it punctuated by Indiana getting to the Big Ten title game.

Brent: Hold on, it?s amazing Indiana is in this situation, in a division with the two best teams ineligible? Is a 1-3 Big Ten clip really amazing? History matters, and as long as Wisconsin features good running backs - it does - and Indiana struggles to stop the run - it does - the result will be the same.

Tom: We shall see. If you want a slug of Crimson Kool-Aid on Saturday, just let me know.

Brent: Only if they beat Iowa AND Wisconsin, which, by the way, would mark the program?s first three-game Big Ten winning streak since at least 1996, according to STATS. So, be honest: You really think Indiana will be in Indy?

Tom: The planets seem to be aligned just right. But in the end, it probably won?t happen because of the leaky Hoosier defense.

Brent: Exactly. I?m just not sold on this Indiana team being able to beat Wisconsin, and that's the key to this whole discussion. I don't see any scenario where the Hoosiers contain Montee Ball and James White.

Here's what BTN.com fans had to say on the issue:

@BTNBrentYarina This is a trick question, right?

@BTNBrentYarina are you serious lol?

The fact that this is a question is sad RT @BTNBrentYarina: The question: Can Hoosiers catch Badgers and represent Leaders Division in Indy?

?@BTNBrentYarina: The question: Can #Hoosiers catch #Badgers and represent Leaders Division in Indy??could you even imagine?