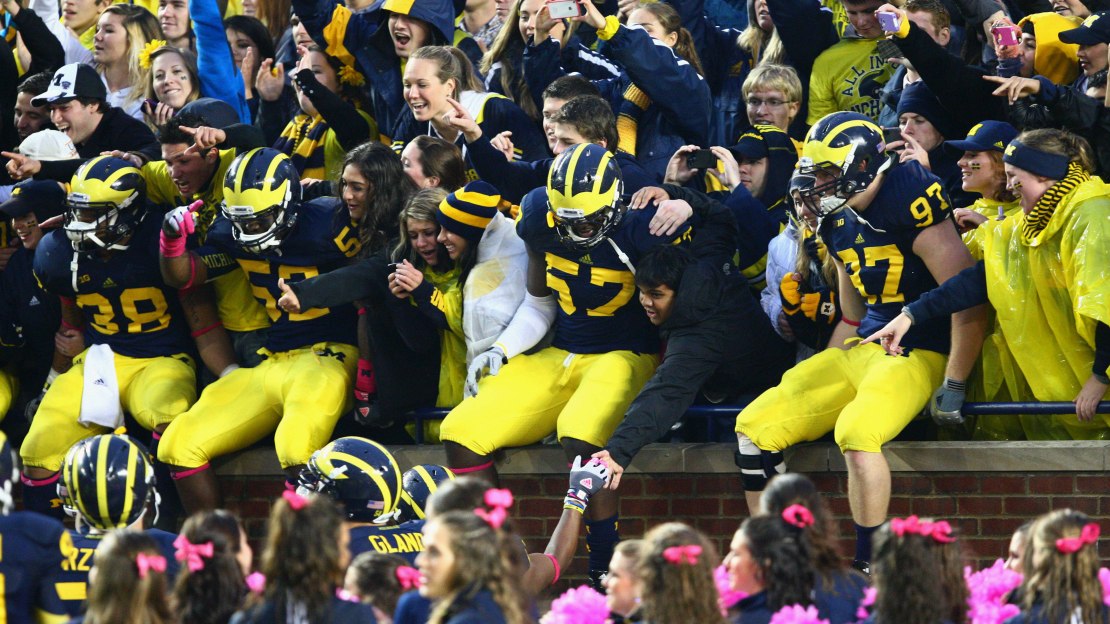 Took a quick spin around the headlines this morning and here's what I found. How can Michigan's offense keep it going? What's fueling Penn State's attack? How worried are the Hawkeyes? And here comes that rematch. Let's dive in.

Change it up: What must Michigan?s offense do to help keep the team on a roll? Avoid predictability, says Kyle Meinke of MLive.com.

Coordinator Al Borges says the Wolverines? identity is as a run-first team. It?s all about playing to the strengths of quarterback Denard Robinson. That works-when you are playing a lesser foe. But Michigan State?s defense bottled up Michigan?s ground game pretty well. Is there any type of counterpunch if the Wolverines see more of the eight- and nine-man fronts they saw last week?

Listen to the big fella describe the up-tempo version of Penn State?s attack that has played a big role in the team being on a five-game winning streak.

There is no doubt the offense has come a long since that season-opening loss to Ohio. But so has the defense. Bob Flounders of the Harrisburg Patriot-News says the success of PSU's defense starts with the linebackers: Michael Mauti and Gerald Hodges. But senior tackle Jordan Hill is developing for a front that should be stronger now that end Pete Massaro is getting healthier. A maligned secondary also is carrying its load. Stephon Morris and Adrian Amos have shined since the opener and the safeties are limiting big plays.

Hawkeye concerns: After a 38-14 loss at home to Penn State that really wasn?t even that close, Iowa has developed a lot of concerns, as you could imagine. Mark Emmert of the Des Moines Register says the biggest concern going forward may be a slumping ground game.

Against Penn State, the Hawkeyes ran for 20 yards on 23 carries, their worst effort in seven years. The rushing game may have more issues are Iowa lost a pair of linemen to leg injuries: left tackle Brandon Scherff is likely done for the season. Right guard Andrew Donnal also went down and his status for next week is uncertain.

If Iowa is going to rebound and finish strong, the defense needs to step up because the offense likely won?t, says Mike Hlas of the Cedar Rapids Gazette.

The Spartans shocked Wisconsin, 37-31, with a 44-yard Hail Mary on the final play in the regular season last year, but the Badgers beat Michigan State in the Big Ten title game, 42-39.

How close has the series been? The teams have split their last six meetings, with the average margin of victory only 5.2 points.

Stay the course: Yes, Minnesota has lost three in a row after a 4-0 start, but Phil Miller of the Minneapolis Star-Tribune says Jerry Kill needs to stay upbeat.

Miller is correct. There is a lot to continue to build on for a program that has taken strides in its second season under Kill. Chief among the reasons for optimism is Philip Nelson, the true freshman quarterback who made his debut last week and figures to start for the forseeable future. Why not? The kid is a talent and nice blend of passing and athletic ability.

Bump it up: Steven Sipple has it correct when he says mediocre recruiting rankings are behind the drop in play in the Big Ten.

The arrivals of Urban Meyer at Ohio State and Brady Hoke at Michigan are great starts and will help. And we are just starting to learn what type of recruiter Bill O?Brien is at Penn State. So, hope floats. Sipple asked BTN?s Gerry DiNardo about the issue. And this quote is spot-on.

?The Big Ten has to have Michigan, Ohio State, Nebraska and Penn State in the top 10 in recruiting almost every year,? DiNardo told Sipple. ?And then it needs three more from 11 to 15. That, as much as anything, is the reason for the SEC's dominance in college football."

My take: FYI: Nebraska plays host to Michigan at 7 p.m. CT on Saturday.

James Morris on PSU: "We knew they were a great team coming in and they definitely have a great coaching staff. They had us figured out."

My take: In case you don?t know, Morris is an Iowa linebacker. And he just paid a heck of a compliment to the Penn State staff.