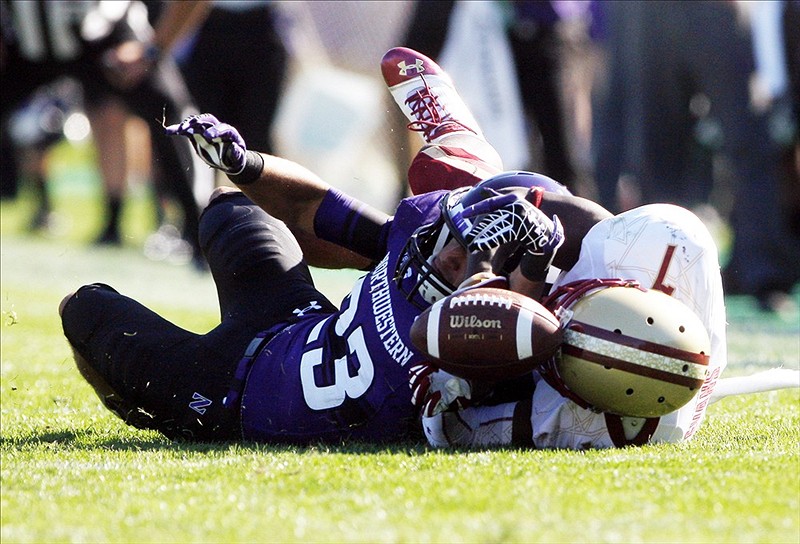 Northwestern has been a surprise team this season, jetting to a 6-1 mark to become the first bowl-eligible Big Ten squad. Now, with a big home game vs. Nebraska looming, Northwestern can dare to dream big. How big? Why not contemplate winning the Legends Division and the Big Ten for the first time since 2000? It?s possible, thanks to a large degree to the defense.

Redshirt freshman cornerback Nick VanHoose has played a big role on a unit that has made significant strides. Last season, Northwestern?s defense had myriad breakdowns, suffering communication issues in the back end and yielding too many big plays.

VanHoose is coming off a breakout effort of sorts in last week?s 21-13 win at Minnesota. He earned Big Ten Freshman of the Week honors, breaking up three passes in the end zone while also notching three tackles. The Golden Gophers were limited to 169 yards passing. For the season, VanHoose has 27 tackles, an interception and six passes broken up.

I caught up with the 6-0, 185-pound Urbana, Ohio, native after practice this week as he prepped to face a Nebraska attack that is No. 1 in the Big Ten in total offense (507.3 ypg) and No. 1 in scoring (43.7 ppg) coming off a bye week. This will be the Cornhuskers? first trip to Evanston since 1931. And Nebraska is looking for revenge after losing 28-25 to the Wildcats last season in Lincoln.

Q: Take me back to last week. What got into you, and how do you account for your big performance at Minnesota?
A: I was just doing my job. It?s as simple as that. Making plays.

Q: Defense isn?t always a strength at Northwestern, but the unit has been a revelation this season. Describe what it is coordinator Mike Hankwitz wants to do each week.
A: We have a great defense and we have great players, and we work well together. We have just stepped up this year. Our defense is just really coming together as the season goes on. Everyone is getting their schemes down. Everyone is just doing their job and getting it done.

Q: A reason the defense struggled at times last year was due to communication issues, particularly in the back end. How has that problem been remedied?
A: At Minnesota last week, there was one time when me and Ibraheim (Campbell) messed up a call. That was the only mess up that we have had this year, I believe, with communication. We made a big emphasis on it in practice and we have continued to re-enforce it a lot.

Q: What have been some of things individually you have been most pleased about from a skill-development standpoint?
A: I have to say my eyes. I have gotten better at reading things. And just knowing more about the defense has helped a lot, too. Where my help is from the safeties, things like that. And as far as reading receivers and quarterbacks on three-stop and five-step drops, I have gotten better at those things, too.

Q: What are some of the things you want to improve at?
A: I want to get even better at reading three-step and five-step schemes from quarterbacks. And I want to get a lot better at my press technique. That?s probably what I am lacking in right now.

Q: Do you think you are physical enough in playing the ground game?
A: I feel that I?m pretty physical. I am secondary contain most of the time, so hopefully the other part of our defense gets to the ball before me. But, I?d say I?m pretty physical.

Q: Have there been any quarterbacks or receivers that have impressed you this year?
A: Most of them have been pretty good quarterbacks. As far as receivers, Indiana?s wideouts-I have to give credit to them. They had some pretty good hands. They were pretty good.

Q: What are some of the things that have caught your eye about Nebraska quarterback Taylor Martinez?
A: I am impressed by his athleticism and what he can do with the ball in his hands. He?s quick, versatile ? and he has a good arm, too. He?s a dual-threat.

Q: Is there a buzz on campus about this game?
A: Not really. It?s just treated like another game. I haven?t had anyone on campus come up and ask me about the game this weekend.

Q: Is this a big game for you?
A: Oh, yes, it?s definitely a big game, for sure. There will be a ton of red in the stands and a ton of purple in the stands. The game was sold out before the season even started. So, many people have been looking forward to this game.

Q: What will you think if you come out on Saturday and see your stadium filled with more red than purple?
A: Hopefully, there will be more purple than red. If it happens, it happens. Once the game starts, the crowd really doesn?t matter. You just focus on the game.