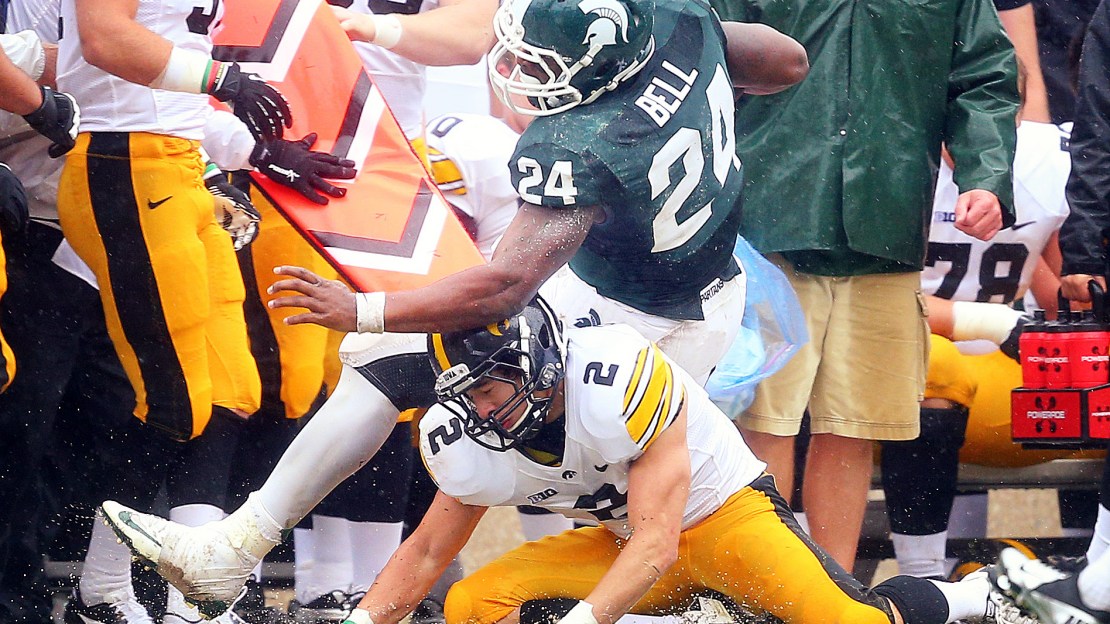 The Spartans will start the second quarter with possession on their own 38-yard line.

Player on the spot: Michigan State RB Le?Veon Bell. The big fella is the engine that makes the Spartan attack go. He has toted the rock over 30 times in three games this season, including a Herculean 44-carry effort in the season opening victory vs. Boise State. If the Spartans get him established, they will shine. By the way: Iowa is No. 3 in the Big Ten vs. the run (111.0 ypg).

Key matchup: Iowa running backs vs. Michigan State front seven. The Hawkeyes will get a boost from the return of Damon Bullock, who has missed the last two games with injury. He will join red-hot Mark Weisman-a growing folk hero-to give Iowa a nice 1-2 punch. And the Hawkeyes will need it vs. the Big Ten?s No. 1 rush defense (86.0 ypg). Spartan linebackers Max Bullough and Chris Norman, along with end William Gholston, are tough to push around. In the end, Iowa may have to pass to have any shot of winning.

Key number: 0.83, number sacks per game for Michigan State. That ranks last in the Big Ten. The Spartans also are just eighth in tackles for loss per game (5.2).

Key note: Michigan State tight end Dion Sims will miss the game with an ankle injury, which will hurt a passing game that has lacked consistency. Sims paces the team with 24 catches. Redshirt freshman Paul Lang and junior Derek Hoebing will have to step up. True freshman wideout Aaron Burbridge is coming off a big game at Indiana (8 catches for 134 yards) and may be the new go-to guy.