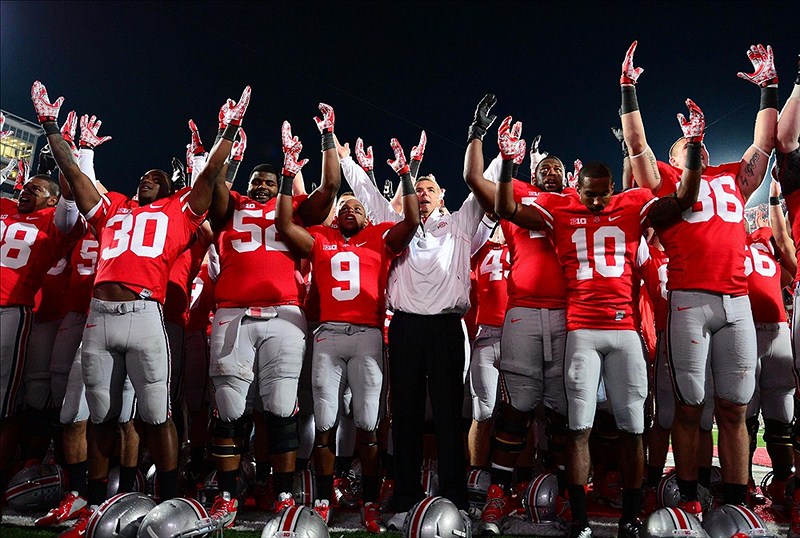 Is it me, or has this Urban Meyer fellow had a bit of an impact at Ohio State?  I know there are still some issues with this team - a bit too reliant on Braxton Miller, a tad shaky at times on defense - but that was still a pretty impressive performance on Saturday night. I really thought going into the game that you could construct an argument that Nebraska was the best team in the Big Ten. I thought wrong.

Though most teams are a pretty safe bet to win when they score 63 points, it turns out the Bucks had essentially wrapped this one up by halftime, when they walked off the field with a 35-24 lead.

1995:  I mentioned the reliance on Miller, but Carlos Hyde certainly provided a huge boost by rushing for 140 yards and four touchdowns. Hyde is the first Buckeye to run for four scores in a game since Heisman winner Eddie George back in 1995.

On Saturday, the Bucks will face an Indiana team that has really looked good throwing the ball this year as it transitions to more of a passing attack.

In what may be the easiest transition between games in the long and storied history of the BTN.com Numbers column, the same can be said of Minnesota.

Part of the explanation for that, frankly, is the injury to MarQueis Gray, a more talented runner than passer. The issue is that Gray?s injury has impacted Minnesota?s balance.

104/209: The Gophers have averaged just 104 rushing yards in the two games they?ve played without Gray. They put up 209 yards per game on the ground in the three games he played in.

Minnesota hosts a Northwestern team that blew an 11- point fourth-quarter lead in its loss to Penn State on Saturday, continuing what has become an obvious and disconcerting trend for Pat Fitzgerald?s team.

7th: The Penn State loss was the 7th for Northwestern under Fitzgerald in a game they had led by ten or more points. Keep in mind, this doesn?t even completely capture the struggles the ?Cats have had when playing with the lead. For instance, this year they saw a 27-point advantage whittled down to 8 by Indiana and allowed Syracuse to come back from 22 down to take the lead on them before rallying for the win. Neither of those counts in the stat. Bottom line - the inability to protect leads is a huge issue for Northwestern.

On the flip side, Michigan State?s rally from 17 down against Indiana continued a positive trend under Mark Dantonio.

6th: The victory was the Spartans? 6th in a game they had trailed by 14 or more points since 2007. That is tied for the most nationally in that span.

That being said, the Spartans' slow starts are more than a bit disconcerting.

3: Over the last four games, Michigan State has scored a grand total of 3 points in the first quarter.

Like the Spartans, Michigan State's opponent this week, Iowa, got off to a slow start offensively this season. The Hawkeyes have picked things up, though, thanks to improvement in the run game and in offensive line play.

6, 0: The Hawkeyes allowed 6 sacks in their narrow season opening win over Northern Illinois. They have yielded 0 sacks in the subsequent four games.

While Iowa has improved in some of its areas of concern, Illinois continues to struggle with some deficiencies that also plagued them last season.

Couple that with a turnover-prone offense and a defense susceptible to giving up the big play, and you begin to understand why the Illini are 2-4 going into their game against Michigan.

They will, of course, have their hands full this week with Denard Robinson, who has made many a defense look silly in his brilliant career.

9th: Robinson was named Big Ten offensive player of the week for the 9th time in his career on Monday. That ties him with former Wisconsin Heisman winner Ron Dayne for the most such honors in a career.

While we?re on the topic of individual accomplishments, Wisconsin?s Jared Abbrederis continued his assault on the Badgers? all-time record books in last week?s win over Illinois, hauling in 7 passes for 117 yards.

3rd:  It was Abbrederis? 3rd straight game with 100 or more receiving yards, making him the first Badger to accomplish that feat since Lee Evans did it in 2001. If Abbrederis gets to 100 yards this week against Purdue, he?ll join College Football Hall of Famer and former Badger Athletic Director Pat Richter as the only two Badgers to have four straight 100-yard games.

Wisconsin faces a Purdue team whose success over the last couple of years has been largely dictated by its ability to run the ball.

We have that critical Leaders Division showdown between Wisconsin and Purdue this Saturday on BTN - and we?ll also feature the primetime battle between Ohio State and Indiana.  Flip us on at 11 a.m. ET for the "The Big Ten Football Pregame" presented by Auto Owners Insurance Pregame. And don?t forget, we wrap up the entire day of Big Ten football right after the Buckeyes and Hoosiers on "The Final Drive."