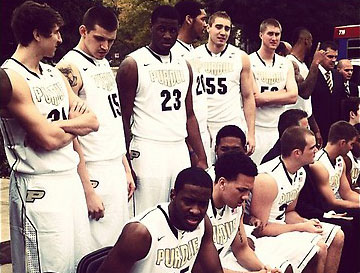 Purdue fans were not sold on the new logo Nike recently gave the school's athletic teams. That being the case, they may have an issue with the basketball team's new uniform. They shouldn't be surprised, though, considering the football team's 2012 duds feature the updated train.

The front looks fine and a lot like what Purdue wore last season. But then there's the back. That's a lot of new train! On the bright side, it doesn't appear to include the smoke on top – a feature many Purdue fans seemed to dislike.

Other than that, Nike outlined the "Purdue" on the front of the jersey – it used to be all gold – and the numbers. Also, the American flag remains on the left shoulder, only now it doesn't stand alone. The required "B1G" patch sits atop the flag.