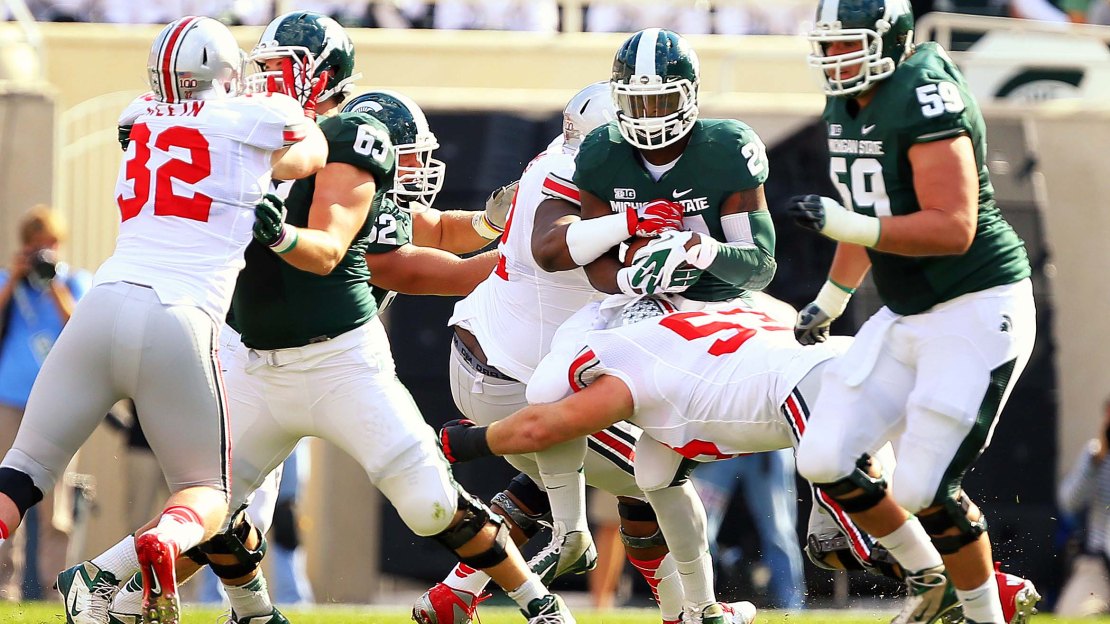 No. 14 Ohio State racked up 67 rushing yards in the first, and the Buckeyes lead 7-3 at the end of the first quarter. Ohio State got on the scoreboard first, rattling off a seven-play, 75-yard drive that ended in a score when Jordan Hall turned a handoff into a one-yard touchdown. The Buckeyes threw just one time during that series.

A 54-yard drive that ended when Dan Conroy made a 30-yard field goal helped No. 18 Michigan State narrow the deficit to 7-3.

The Spartans will start the second quarter with the ball on their own 37-yard line.

Player on the spot: QB Andrew Maxwell. If the Spartans want any chance to win, they need to pass the ball. And that has been a struggle the first four games, with Maxwell having some accuracy and decision-making issues. But it?s not all on Maxwell, as the MSU wideouts need to do a better job catching the ball. The good news for the Spartans: The Buckeyes rank last in the Big Ten in total defense, and 11th vs. the pass.

Key matchup: Ohio State QB Braxton Miller vs. Michigan State linebackers. Max Bullough, Denicos Allen, Chris Norman must contain Miller, who may be the top dual-threat quarterback in the land. The Spartans, who looked lethargic in a 23-7 win over Eastern Michigan last week, may have the best set of linebackers in the Big Ten. This is strength on the strength. Who is going to prevail? The winner of this battle within a battle figures to take the game.

Key number: 7, sacks Michigan State had vs. Ohio State last season in a gritty 10-7 win in Columbus. The Spartan defense, No. 1 in the Big Ten, will need a similar effort vs. Miller. MSU has just three sacks this year and only three interceptions. Now would be a good time for end William Gholston to have a breakout effort in what thus far has been a disappointing season.