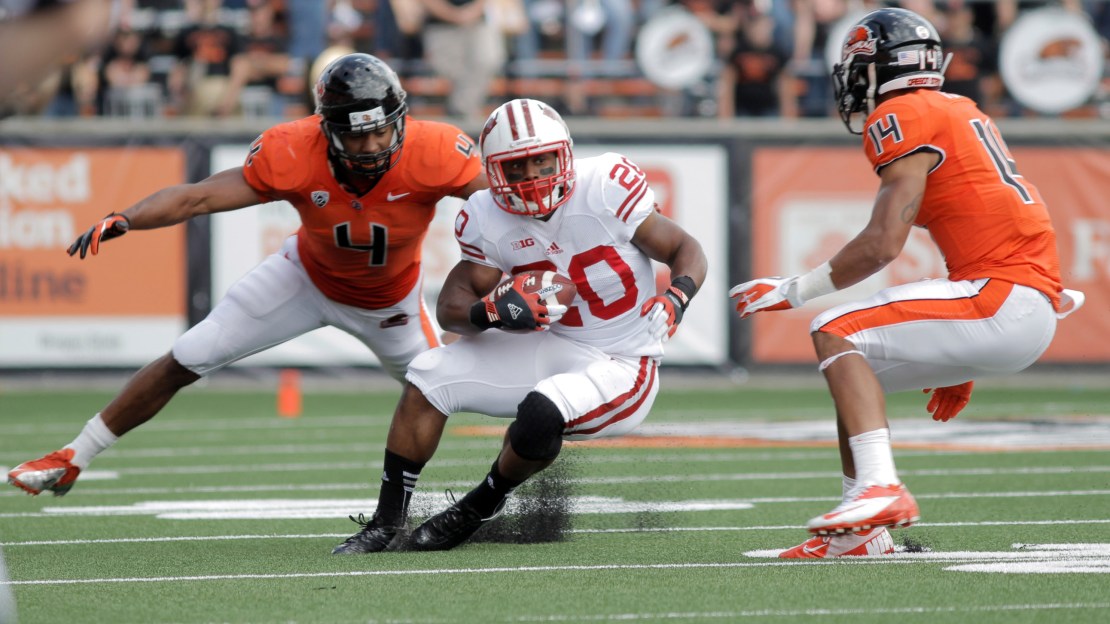 Let me start this by saying we're only two weeks into the college football season. Admittedly, that's a very small sample size. But in the first two weeks – one good, one bad – there have been many surprises in the Big Ten.

See my five biggest surprises through the first two weeks of the season in this post.

1. Wisconsin's offensive struggles – A season ago, this unit averaged 44.1 points per game and put up 72 points in two contests against Michigan State's dominant defense. Even with one-year star QB Russell Wilson in the NFL and a host of assistant coaches in different places, no one expected Wisconsin's offense to be this bad. After all, 2011 Heisman Trophy finalist Montee Ball was back for his senior season, and he would be running in front of Wisconsin's perennially stout line. Not so much. Through two games, the Badgers rank 101st nationally in rushing yards (203) and have scored 33 points, 11 under last season's average per game. Last week's seven points at Oregon State? It marked Wisconsin's lowest scoring game since a 48-7 loss to Penn State on Oct. 11, 2008.

2. James Vandenberg's zero touchdown passes – Two games in, Vandenberg already has as many touchdown-less performances as he did in 13 games last season (2). It's been a struggle for everyone involved with Iowa's offense, however Vandenberg wasn't expected to play like this as a senior – not fresh off a season in which he threw 25 TD passes in his first year as the starter. Look, losing a receiver the caliber of Marvin McNutt would hurt a lot of quarterbacks, and it's never easy to master a new offense right away. But who saw these struggles coming? Forget about the lack of touchdown passes, Vandenberg's completion percentage is down, from 57.7 percent last season to 54.7, as is his passing yards per game, from 232.5 yards to 182.5. The numbers are even more troubling because the toughest competition awaits in Big Ten play.

3. Nebraska's poor defensive play – Lavonte David and Alfonzo Dennard are in the NFL and last season's defensive coordinator Carl Pelini is the head coach at Florida Atlantic. That's a lot to overcome and plenty to adjust to, yet the Huskers were supposed to boast one of the Big Ten's better defenses. The unit has looked more like one of the Big Ten's worst defenses through two games. Yes, the Huskers have played two quality opponents (Southern Miss and UCLA), but look at where the unit ranks among FBS teams in these categories: 105th in yards (913), 121st in rushing yards (529) and 85th in points per game (28). Worst of all, the Huskers allowed UCLA to run 94 – yes, 94! – plays and total 653 yards in last week's loss.

4. Trevor Siemian, not Kain Colter, in crunch time – The Wildcats are 2-0 and account for the Big Ten's lone victories over BCS teams. Both big wins have come down to the final minutes, and to the surprise of many, it's been Siemian, the backup, not Colter, the starter, who has led the Wildcats on the game-winning drive each time. Pat Fitzgerald indicated this summer that both quarterbacks would play, but the timing of the rotation has raised eyebrows. It's worked, though, because Siemian is the better passer of the two; in fact, some would argue he's the best pure passer in the Big Ten.

5. Taylor Martinez's improvement as a passer – Throughout the offseason, we heard all about Martinez's time spent with his summer passing instructor and how he wanted to complete 70 percent of his passes this season. Chances are, one of those items had you rolling your eyes at least once. Thing is, the junior has improved as a passer. He isn't as good as his five-touchdown day in Week 1 – who is?! – but he is a better quarterback. While his mechanics still aren't worthy of being showcased on an instructional video, they're improving. He's setting his feet more often now, and he's not so quick to tuck it and run. Martinez isn't a finished product, to be sure, however not too many people had him pegged for 533 passing yards, five passing touchdowns and one interception through two games.