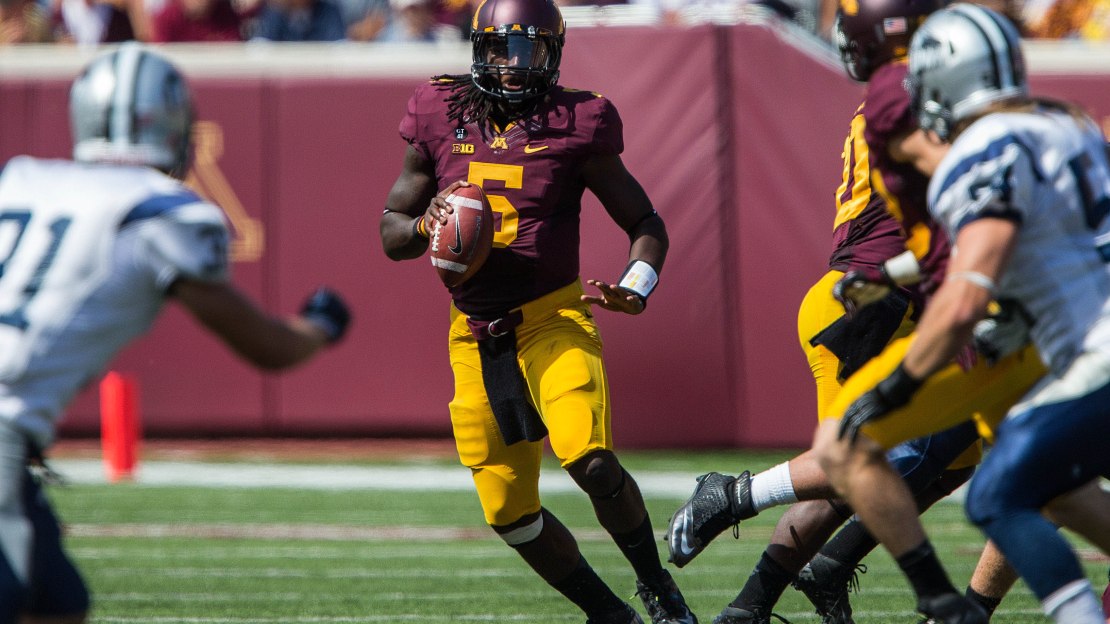 Minnesota and Ohio State carded easy wins in early Big Ten action, while Penn State lost a one-point heartbreaker at Virginia. Read my snap reactions to the two wins and check out my column on Penn State's defeat.

On tonight: Nebraska vs. UCLA, Northwestern vs. Vanderbilt (BTN/BTN2G0) and Illinois vs. Arizona State. Go ahead and park your browser on our Big Ten football scoreboard all day long.

Ohio State 31, Central Florida 16
1. I knew Braxton Miller was good. But, I was wrong. He?s REALLY good. The sophomore sensation followed an impressive opener with another terrific effort today. He ran 27 times for 141 and three touchdowns. The last Buckeye signal-caller to rush for three scores in a game? Art Schlichter in 1978. Miller also hit 18-of-24 passes for 155 yards and a score. No Big Ten player has performed better this season.

2. The defense didn?t look great, suffering some lapses. UCF had success throwing, notching 253 yards. But the Buckeyes did come up with three interceptions and limited the Knights to 99 yards rushing. Still, this unit can do better-and it will.

3. The final score looked good, but the 10 penalties and three turnovers committed by Ohio State caught my eye. The Buckeyes will need to play sharper. Ohio State has two more tune-ups at home-Cal and UAB-before opening Big Ten play at Michigan State in a tilt that may feature the two best teams in the Big Ten. In fact, if not for probation on OSU, it may be a preview of the Big Ten title game.

Minnesota 44, New Hampshire 7
1. In each of the last two years, the Golden Gophers lost to FCS teams. Just embarrassing. Well, those days are over. Not only did Minnesota dispatch FCS New Hampshire, but it rolled the Wildcats. It may not seem like much, but this is a nice step in the evolution of the program in Year Two under Jerry Kill.

2. QB MarQueis Gray looked like I thought he?d look after an uneven opener at UNLV. The super-sized signal-caller threw for two scores and ran for two scores today. The 44 points that Gray help engineer were the most for the program in five years. He hit just 6-of-8 passes but they went for 100 yards. And Gray ran 17 times for 109 yards with one jaunt of 75 yards.

3. The defense showed good signs today vs. New Hampshire?s no-huddle attack. The Gophers limited New Hampshire to 68 yards rushing on 32 runs en route to yielding just 231 total yards. This was a porous unit that ranked 10th in the Big Ten overall in 2011.