Back & Forth: Which Week 1 outing caused concern? 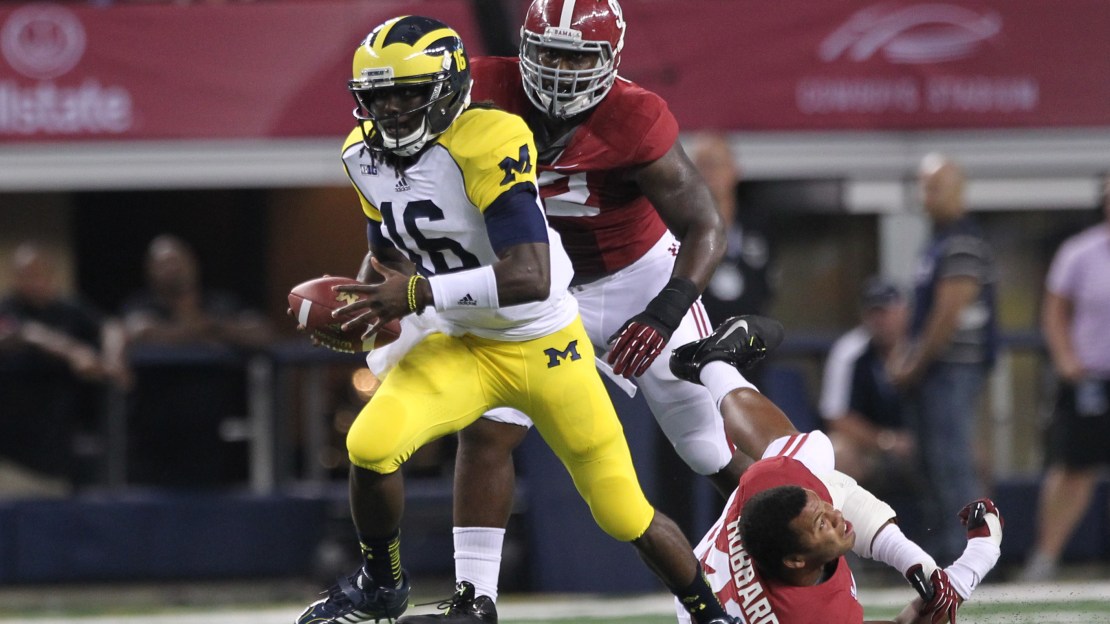 It wasn't a pretty start for Michigan's Denard Robinson or Michigan State's Andrew Maxwell in the first week of the 2012 college football season. Together, the two quarterbacks completed 33-of-64 passes (52 percent) for one touchdown and five interceptions. Robinson accounted for the lone touchdown and Maxwell completed a respectable 22 passes, however that was about it. Whose performance was more concerning, though? BTN.com's Tom Dienhart and Brent Yarina debate it in this post as they do each week in Back & Forth.

Brent: I hate to say it, but Denard Robinson's performance worries me. While few quarterbacks are going to have success against Alabama, the issue here is that Robinson's struggles against ranked teams continued. A guy who often destroys lesser foes, Robinson now is 3-11 versus top 25 teams. If that?s not bad enough, he?s completed only 54 percent of his passes and thrown 12 TDs and 13 INTs in those games. Keep in mind, Michigan has dates with Michigan State, Nebraska and Ohio State remaining. And that?s not counting tests against Illinois and Purdue, teams with talented defenses.

Tom: Good points on Robinson. But Andrew Maxwell has his work cut of for him, too. He looked shaky in his starting debut last Friday vs. Boise State. Maxwell hit 22-of-38 passes for 248 yards with three interceptions. Yes, Maxwell wasn't helped much by his line, which looked spotty at times in pass protection. And that was vs. a Boise defense that had nine new starters! And his receiving corps remains as unproven as he does. Until he shows he can throw, Maxwell will face defenses stacked to stop running back Le'Veon Bell. Can Maxwell make defenses pay? The jury remains out.

Brent: You said it right there, that the Michigan State offensive line was spotty in Week 1. That was Maxwell?s first start, and most everyone would agree two of the interceptions were no fault of his own. The final numbers weren't pretty, but let?s not forget about the dropped passes. Give Maxwell and his unproven receivers more game action together, and they will build a better rapport. It almost has to happen, right?

My thing is that we already know what Robinson is – an exciting player who will put up gaudy numbers against lesser opponents and struggle against the top ones. But Michigan won?t be able to compete for the Big Ten title if Robinson doesn?t shine against tougher opponents. That, to me, is reason for concern. Maxwell, on the other hand, has room to grow and can succeed as a game manager, thanks to Michigan State's stout defense and Le?Veon Bell out of the backfield.

Tom: Don't be so quick to dismiss Robinson. The guy is a senior who I think has his best ball in front of him this fall. Will he ever be a Dan Marino? No, but offensive coordinator Al Borges says Robinson has gotten better as a passer–and I trust we will see it later in the season. Let's not judge Robinson's 2012 prospects off of one game vs. one of the top defenses in America.

No doubt, Maxwell can be a "game manager," as you say. But, I expect a bit more from a guy who has been in the program this long. He needs to be a "playmaker" if Michigan State is truly going to hit elite status this year and get to the program's first Rose Bowl since the 1987 season. Remember, a big reason why Michigan State was great in 2011 was because of Kirk Cousins. And he did more than hand-off and not make mistakes. He made plays. Can Maxwell do that? Hmmmm.

Brent: I?m not dismissing Robinson or overreacting to one game - I?ve said he?s going to torch the teams he?s supposed to. It?s the struggles against the good teams that worry me and that could keep Michigan from achieving its goals. Robinson will put up huge numbers that are as good as any when all is said and done, but what will happen when Michigan State and Ohio State are the opponents?

Also, I'm not saying Maxwell's ceiling is as a game manager – just that Michigan State CAN win games with him in that role. In fact, his struggles don't worry me much (at least not yet), and I strongly feel he will be a solid and reliable quarterback. His mistakes are correctable and understandable for a guy who was making his first start, one in prime time no less.