Dienhart: My thoughts from Illinois practice 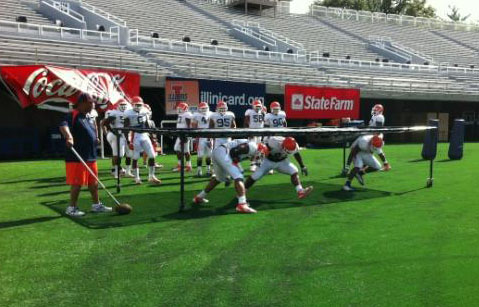 Quarterback Nathan Scheelhaase moves well, which he showed today in practice. He always has had good feet and is one of the more athletic signal-callers in the Big Ten. He also threw the short pass well, which is key in this spread offense that is predicated on quick decisions and intermediate toss.

It will be a shock if he isn?t the guy under center in the opener. At 6-5, Reilly O?Toole certainly looks the part and has the best arm of all the signal-callers. But co-offensive coordinator Chris Beatty told me Miles Osei is pushing O?Toole and may have the strongest arm of all the quarterbacks.

Speaking of Osei, he figures to be one of the Big Ten?s most versatile players. The staff works him at quarterback and also has him catching passes, running with the ball, running back kicks and holding for field goals. He?s a definite playmaker. And this offense needs playmakers.

Questions loom at receiver with star A.J. Jenkins gone. No one on the roster has really proven they can do it at a high level in the Big Ten. I liked what I saw from Spencer Harris, Darius Millines and Ryan Lankford. Beatty told me Harris has the best hands; Lankford is the fastest; Millines is the most well-rounded. He is especially quick in and out of cuts and may be the best of the bunch. Lankford is a thin quickster. Justin Hardee is an impressive freshman receiver who is extremely quick. He will play this fall.

Donovonn Young and Josh Ferguson look like a nice tandem at running back. Young is a bigger back who is well built, while Ferguson is smaller and quicker. Each will be used out of the backfield to catch passes. Ferguson showed the better hands of the two. The guy rarely drops a pass. And Gonzales says true freshman Dami Ayoola will play. He saw a lot of action today and looked quick.

The one guy you can?t help but notice and gravitate toward is tight end Jon Davis, who also will be used in the slot almost like a receiver. He is a rangy athlete who runs the field. He often created mismatches with safeties. What he lacks in bulk and in-line blocking skill Davis compensates for with pass-catching acumen. I think he?s primed for a huge season.

We saw some two-tight end sets with Davis split and Evan Wilson on the line. He?s a more big, physical and traditional tight end. The staff likes Eddie Viliunas, who has great hands. He came to campus as a walk-on quarterback but has grown into a viable tight end. Matt LaCosse is another tight end who will figure in this deep and talented rotation.

I knew coming in that the line was the biggest concern on offense, as shuffling has gone on. The left side looks solid. Graham Pocic is a good building block. He is a tall, angular blocker with good feet. He toiled at center last season but now is a guard. Hugh Thornton is a thick-bodied blocker who has some skill on the edge at left tackle, but he was nicked up and didn?t practice today. Jake Feldmeyer may have a hold of the center slot. Alex Hill was at right guard, while Michael Heitz was at right tackle. The second team had Simon Cvijanovic at left tackle; Tyler Sands at left guard; Tony Durkin at center; right guard Ted Karras; right tackle Ryan Nowicki. But, stay tuned: This line remains a work in progress.

The defense has a nice collection of athletes in the front seven. End Michael Buchanan is one of the best looking players I have seen on the tour. He?s every bit of 6-6 and can move. He lacks bulk and mass, so he has to avoid getting engulfed. On this day, he dressed but did little. Justin Staples is another quick player off the edge who poses issues for lumbering tackles, but he doesn?t always hold up at the point of attack. Tim Kynard is a more physical end vs. the run.

The tackle duo of Akeem Spence and Glenn Foster will be very good. Spence is built low to the ground. He looked strong at the point of attack when I watched him in drills. Defensive coordinator Tim Banks told me he is extremely strong, making him a cumbersome force to move. Foster was another impressive player who caught my eye. He has added 20 or so pounds and is one of the most improved players on the team. He may be a pro when it?s all said and done.

The safety spot could be an issue. There are several options, headed by Supo Sanni. He?s built like a linebacker but didn?t practice today. Northern Illinois transfer Tommy Davis is a guy who can help. He showed me an ability to hit.

The starting cornerbacks are good. Terry Hawthorne is an elite athlete with quickness to stay with any wideout. I saw him make some nice plays on the ball in the air. He?s such a good athlete that staffers used him at receiver in the spring to get his playmaking skills on the field for an offense that needs them. But Hawthorne told me before practice that he hasn?t worked at wideout in camp, focusing on cornerback. Like Hawthorne, Justin Green is savvy senior who showed me he could hit and cover with equal aplomb.

I made sure to watch the kickers and punters, as these are areas of big concern. Special teams have really struggled in recent seasons.

Justin DuVernois is battling for the punter job and had some good boots. Ryan Lankford also took some turns punting. True freshman Ryan Frain is competing at kicker and punter, but I?m not sure if the staff wants him doing both jobs. Taylor Zalewski also is in the hunt. Nick Immekus is leading the chase to be kicker. In a simulated pressure situation, he delivered.