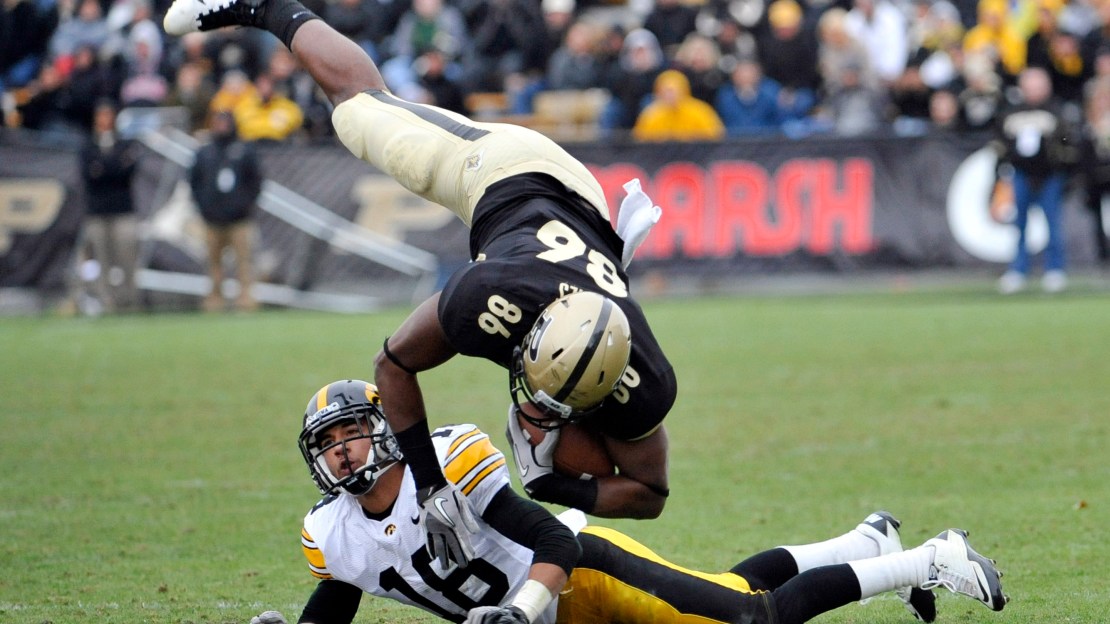 Kirk Ferentz?s Iowa staff was famous for its stability since he took over in 1999. But that all changed after last season. The key changes were new coordinators on both sides of the ball for the first time under Ferentz. Offensive coordinator Ken O?Keefe left to coach with the Miami Dolphins, while defensive coordinator Norm Parker retired.

To replace Parker, Ferentz promoted secondary coach Phil Parker-no relation–to take over a unit that slumped in 2011. Iowa?s defense ranked eighth in the Big Ten last season (378.9 ypg). The rushing defense was No. 7 (156.0 ypg), while the pass defense was 11th (222.9 ypg).

As the Hawkeyes prepared for camp, I caught up with the 49-year-old Phil Parker, who was a standout defensive back at Michigan State, to talk about his defense.

Q: Much is made about the issues on the defensive line. How is the unit coming together?
A: We are young and lost a lot of guys from last year. Once we get the two guys who weren?t in spring ball back, (Dominic) Alvis and Carl Davis, I think it will add some depth there for us. But it?s gonna be a work in progress. Losing as many guys as we have the last two years is difficult for anybody. They were some good players. But we have a chance to get ready in camp and are excited about where they are at.

Q: Is the linebacker spot coming together like you thought it would?
A: Yes. With (James) Morris in the middle, he is a guy who is very important to our defense. Christian Kirksey is good on the outside. (Anthony) Hitchens is in there as a Will linebacker right now, but we are looking for guys to fill the backup roles and who can step up in there. We feel good about our guys and the guys backing them up. We just need to grow a bit and mature.

Q: Is the secondary going to be solid for you?
A: We think we have a good group. At safety, we have Tanner Miller who played last year and he improved during the year and he understands what he needs to do. He will come on a bit better this year. Backing him up probably will be (John) Lowdermilk at free. And you have (Nico) Law and (Tom) Donatell fighting it out at strong safety. We think we are in good shape (at cornerback) with (Micah) Hyde returning. He has played a couple years. B.J. Lowery played a little bit last year. We have to find some depth behind them. Overall, it looks solid and we feel comfortable with where they guys are at. We just need to keep improving.

Q: How will your style be different than Norm Parker?s?
A: I don?t think there will be a whole bunch of differences. I have been around Norm the past 13 years. We preach a lot of the same things about sound defense. It comes down to coaching technique, and we have done a good job doing that. And we also have to get guys to play at a high level. You have to coach them. Do we do some different things to help out the defensive line? I think time will tell. I think the kids have responded positively to me and the other new coaches on the defensive staff. But I think overall we will be very similar, but things may change during the process if they have to. But right now, I don?t see a big difference.

[BTN.com: Did You See This? The Ferentz family photo]

Q: So, there are no plans to be more aggressive on the back end?
A: I always like to have aggressive guys coming down hill and getting the safeties or corners more involved with an extra man in the box. But hopefully we can get them trained to where they don?t always have to be down in the box to make the tackle at the line of scrimmage. There might be more aggressiveness. But we need to focus on fundaments for now.

Q: How are the new assistants on defense blending in?
A: It has been an easy transition. (New line coach) Reese Morgan was coaching the offensive line, so he knows what (defensive linemen) are trying to do. That really helps. And he?s a great teacher. (New linebackers coach) LeVar Woods has been around the building for a while, and all the kids know him. And he has a good background as a former linebacker. He?s a good fit. There are a lot of positive things going on.

Q: Will you be in the booth or on the sidelines?
A: I plan on being in the booth right now. It will be a bit different for me. But it might be a benefit as far as seeing the whole picture from the box. You can look at it both ways. Are you too far detached? Time will tell with that. Right now, I want to stay in the box and see how that feels.

Q: Do you still talk to Norm Parker?
A: Yes, I just did today. He?s still in Iowa City. He took the summer off. He just got back from the Upper Peninsula. He has a lot of knowledge. He just wants to watch and see how things go and keep his distance. But he?s always a good sounding board, no question.