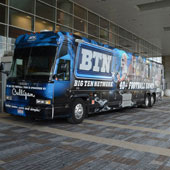 If it?s August, it must be time for the Big Ten Football Preview Tour. For the sixth straight year, Dave Revsine, Gerry DiNardo and Howard Griffith will zigzag across Big Ten country to bring fans a 60-minute, on-site preview show from every Big Ten campus on the Big Ten Football Preview Tour, presented by Culligan. The BTN crew will travel over 3,000 miles, across the conference?s nine states, in a customized chartered bus branded with the BTN logo. All shows can also be seen on BTN2Go. Fans can also virtually jump on the bus via Twitter by following @BigTenNetwork, @BTNDaveRevsine, @HowardGriffith, @gerrydinardo and @BTNTomDienhart from the road. Dienhart, BTN.com?s Senior Writer, will also be providing daily stories from the tour at BTN.com/tour.

BTN?s preseason football coverage continues the following week with two, hour-long Big Ten Football Preview shows. The first show will highlight the Legends Division on Tuesday, Aug. 28, followed by the Leaders Division Preview Show on Wednesday, Aug. 29. Both shows will air at 8 p.m. ET with a second chance each night to watch at 11 p.m. ET.

The television schedule for the Big Ten Football Preview Tour is listed below: