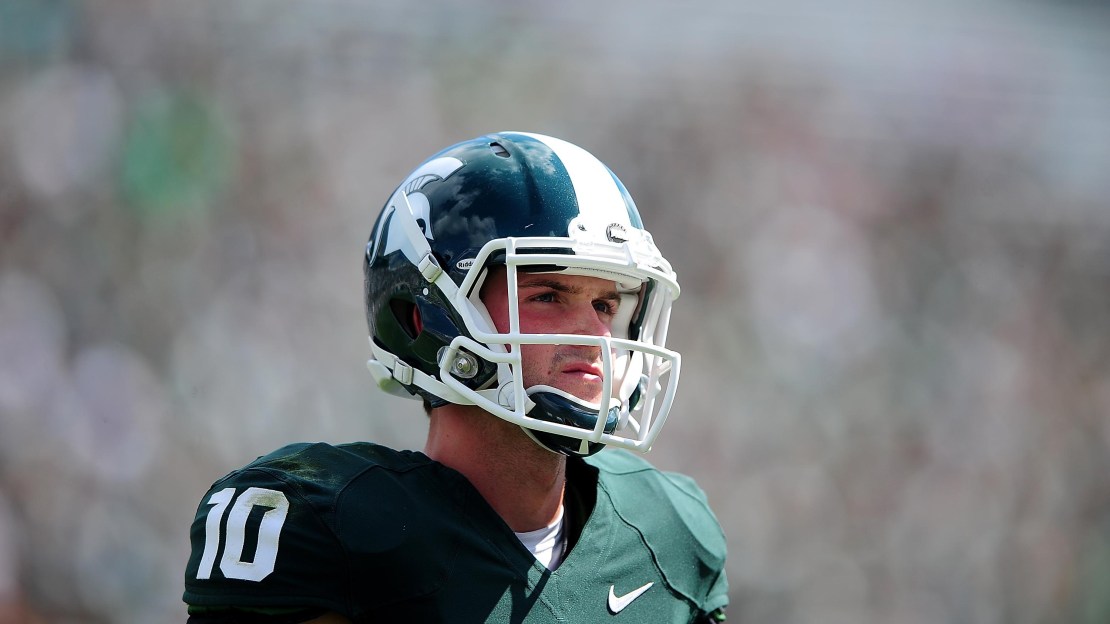 After Don Treadwell left to be head coach of Miami (Ohio) after the 2010 season, Michigan State head coach Mark Dantonio turned to offensive line coach Dan Roushar to be offensive coordinator. And that has proven to be a good move. Last season, the Spartan attack ranked fourth in the Big Ten, averaging 390.4 yards during an 11-3 season that included a Legends Division crown and triple-overtime Outback Bowl victory over Georgia.

I caught up with Roushar-who came to Michigan State from Cincinnati with Dantonio prior to the 2007 season–to get his thoughts on the Spartan attack just days before the start of camp.

Q: Is this the best line ever under Mark Dantonio?
A: We have a lot of experience returning and are very optimistic that the guys will come together and be a very good offensive line. So, I agree with that notion. We feel good about the depth. We feel good about the experience. Love the work ethic and attitude. Leadership has been excellent. We are very optimistic what those guys can provide for us, unlike a year ago when it was such an unknown. We have an idea who will be the starting five. And we have some reserves who have started for us in the Nos. 6 and 7 spots and even No. 8 spot to some degree.

Q: Who will be some of the leaders on the line?
A: Chris McDonald. He?s a senior and a three-year starter. He has been extremely vocal in his leadership and been a great example. He can bring the group together and be a great leader for the offense and entire team. Fou Fonoti is a guy who has a tremendous personality and plays with a lot of enthusiasm and energy. Guys gravitate to the way he does things. Travis Jackson returns at center. He didn?t play the first three games last year due to an ankle injury but he came on and provided invaluable leadership for us. We will look to those three to have a tremendous presence for the entire team-not just the offense and the line.

Q: How nice is it to have Le?Veon Bell in the backfield?
A: We know we have a proven commodity in Bell. And behind him is Larry Caper who was played and helped us win games. Nick Hill was vital in our special teams last year and will push Larry this season. We feel good about running back and it looks to be very solid. We think there is great competition in there. Like the offensive line, we like where we are starting. We have some young guys we need to find out how they develop and learn and see if they will add to the completion and depth at the position.

Q: How can Bell get better?
A: It?s not just one thing we expect him to be better at. We expect him to be highly competitive day in and day out and continue to improve at the little things. He has the ability to be an excellent pass receiver. He?s an excellent blocker in protection and has run the ball effectively. We?d love to see him hit some home runs as a runner. But at the end of the day, the most important thing for him is the display of consistency and ability to be counted on a weekly basis. He shared the workload last year and he was sprinkled in as a freshman. He now has the opportunity (to be the main man).

Q: Much has been made about the loss of quarterback Kirk Cousins. Is Andrew Maxwell ready to take over?
A: We all are really excited about Andrew Maxwell and his ability. He has worked awfully had. He has a lot of the same qualities that Kirk (Cousins) possessed in terms of leadership and preparation. The unknown is how he will react on game day. We won?t know that until he plays. He has had the opportunity to get in there, but not with the game on the line. We can?t do anything about that, but we feel very good about what he can do. Connor Cook got a lot of work this spring and saw great improvement. I think we have a guy who has a lot of ability. He is big and very strong, has some athleticism to move. I don?t know if you will run him, but he can extend plays with his feet. We will see how freshman Tyler O?Connor develops when he comes in. We need to find out the third piece of the puzzle.

Q: Michigan State lost a lot at receiver, with B.J. Cunningham, Keith Nichol and Keshawn Martin gone. Will your offense be OK?
A: At wideout, like quarterback, there is not a lot of returning experience. But I think at the end of the day, we feel good about how they performed in the summer. They have worked hard. We hope to see a group come in and not have a drop off. Like at quarterback, you just have the unknown. The experience factor isn?t there. Tony Lippett played a lot in the secondary a year ago, so he has played in situations and has played some receiver. Two years ago, Bennie Fowler was a productive receiver for us and is healthy now. We will watch the young guys develop behind them. Keith Mumphery is a name, Andre Sims is another and we will find out about the freshmen when they come in.

Q: How is tight end looking?
A: At tight end, we have a young man who we think has a lot of ability in Dion Sims. He can be an excellent in-line blocker, which is important in our offense. But he also has a skill set as a receiver. He is 6-5 and can weigh between 270 and 280, so he is a big, big body with excellent ball skills. We are very optimistic about what he can bring. He had a good spring and good summer. The big question for him will be if he can stay on the field and not have any setbacks with health. If he does, he could be a good. We have some capable guys behind him.

Q: Will the offense be run-oriented early on without a veteran quarterback?
A: I don?t think so. Our mind-set is to go in and continue to be who we have been. We didn?t run the ball well early last year. Now we have an experienced line and some backs we like and think we can run the ball more effectively. We understand the need to be balanced and big plays come with play-action passes and throwing down the field. We have no plans to be any different. We will see what we do well in camp and find players who are emerging and build from there.