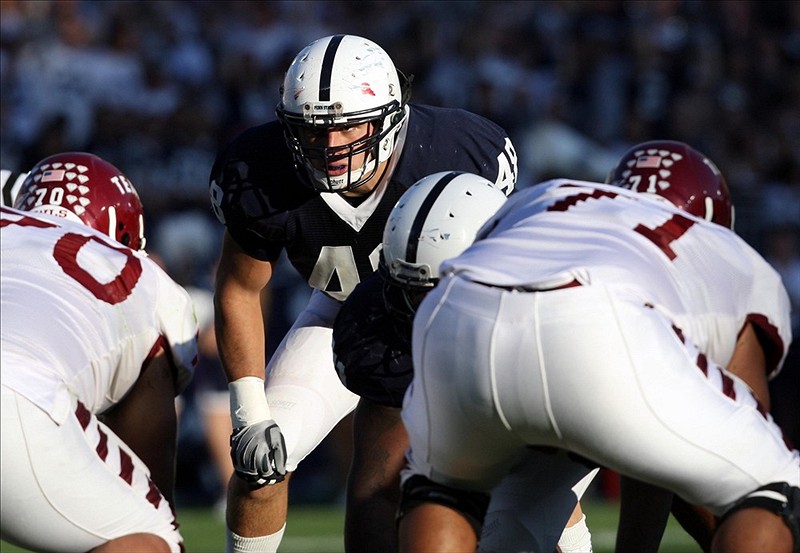 I'm at the Big Ten Media Day & Kickoff Luncheon and I'm covering Friday's player and coach media availability so I'll have more on that later today. Joining me is BTN.com web editor Brent Yarina, and we both on  on Twitter (@BTNTomDienhart & @BTNBrentYarina). Tonight BTN airs a 90-minute Big Ten Football Kickoff Luncheon Special at 8 p.m. ET, hosted by Dave Revsine, with analysis from BTN?s Gerry DiNardo and Howard Griffith. Watch it live on BTN/BTN2Go.

You have questions, I have answers in this week?s football heavy mailbag. Thanks for all of your help!

Those who stay will be champions! – Josh K.

I like how you think! No doubt, those who remain committed to Penn State will reap the rewards of helping the program build a new foundation as it moves into a new era. In many ways, it reminds me of the Kentucky basketball players who remained under Rick Pitino in the wake of severe NCAA sanctions following the Eddie Sutton era. Those players were immortalized by the school as the ?Unforgettables? and are canonized in the rafters of Rupp Arena.

I hear the Penn State football alumni are going to sue the NCAA in court to get back the wins stripped from the program. Your thoughts?- Tommy Heinz

What? Really? Are you kidding? Not a chance this happens. Everyone needs to remember who the victims are in this Penn State saga. It certainly wasn?t the former Nittany Lion football players or Joe Paterno. Get serious.

I ask you, how can anyone not allow the full story to come out and chose to burn the barn down as if this is a witch hunt? This has been mob mentality at its worst. – Jim Risch

I think people may have some legit reasons to be unhappy with the NCAA?s rush to judgment in the Penn State case. NCAA president Mark Emmert skirted standard procedures and Penn State?s due process was trampled. But this was an unprecedented case that required unprecedented action by the NCAA.

Had Penn State?s house been in order to begin with, it wouldn?t be in this situation. But, its most trusted leaders failed-putting the future of the program into the hands of the NCAA. The result: severe sanctions. And they are sanctions that Penn State agreed to and signed off on. Don?t forget: PSU commissioned the Freeh Report; PSU has said it agrees with its findings as fact.

Penn State should be contrite, humble and furiously apologetic in this situation. It shouldn?t be kicking and screaming about what it feels is unfair treatment by the NCAA.

Again, don?t act like Penn State is the victim in this. The children that Jerry Sandusky abused were the victims.

Since Penn State is a newcomer to the Big Ten and since the Big Ten has generally been compliant with the NCAA, should the Big Ten drop the school from its membership? – Jay Stein

Since Penn State has accepted its NCAA and Big Ten imposed sanctions, I don?t think any action as severe as removal from the conference will be considered. But had Penn State fought the rules by the NCAA and Big Ten ? Who knows? I can?t believe NCAA chief Mark Emmert and Big Ten commissioner Jim Delany would have been very happy with Penn State had it fought its penalties.

In your opinion, what is the benefit for the Paterno family to continuous release statements defending the late coach? -Vincent

I guess they feel the need to defend their father, but their timing seems horrendous. I think they should cease. There may be a better time and place for this type of rhetoric.

JoePa was a great man, until it came down to the one decision, or lack of decision, in his life that really mattered. Yes, Paterno followed protocol, so he had no "obligation" to do more. However, I think the true measure of a man is not defined by his obligations, but rather by the decisions and actions he takes, especially when those decisions impact innocent children victimized by a monster. Then, I think, the issue becomes not so much what you are obligated to do, but rather, what you should do as a leader, a parent and a human being.

If Paterno reported what he knew to his bosses , as he said, and he didn?t feel the authorities were doing enough, I guess it just depends on what's important to a person to determine how far to pursue it. Children being sexually abused, to me, is important enough to follow it to hell and beyond. If I'm wrong, put the statue back. – Philip

Beautiful. I couldn?t have said it better myself. This sums it all up for me. Thank you very much.

Ohio State under Urban Meyer seems to really be expanding its reach in terms of recruits. Is this a good thing or bad thing, since some kids in Ohio are now going to other Big Ten schools? Is getting a higher-ranked player better than keeping lower-ranked kids in the home state? – Tim

It?s this simple: You always want the best player-no matter where he is from. You don?t take an inferior talent over a superior talent just because he is from your school?s state. That is preposterous. There will always be plenty of very good Ohio kids for Meyer to recruit and sign. But if he can cast a net nationally to get great players, then he should do it. And he is.

With the Big Ten not doing so well in bowl games this last season, how as a conference do we improve this? – Anthony

Sign better players. It really is that simple. As many coaches have told me: It?s not about the Xs and Os, it?s about the Jimmys and Joes. Translation: The coach with the better players usually wins the game.