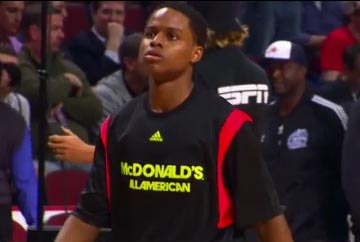 If you don't know the names yet, familiarize yourself with Yogi Ferrell, Gary Harris, Sam Dekker, Mitch McGary and Adam Woodburry before the college basketball season tips off. The way talent evaluators speak of these Big Ten incoming freshmen — among others in the deep and talented class — the future of the conference is in excellent hands.

But how much will these uberly talented freshmen contribute in Year 1? Drew Cannon, of KenPom.com, takes a look at that in his 2012 freshman projections, which analyzes members of ESPNU's Top 100 incoming freshmen.

A few things of interest from Cannon:

On Iowa: "Though (Adam) Woodbury?s the better player, it?s more likely that he gets buried on the bench behind White, Melsahn Basabe, and Zach McCabe than it is that (Mike) Gesell isn?t the Hawkeye point guard."

It will be hard to bury a 6-11 guy on the bench, especially one with the skill-set of Woodbury. Prediction: Woodbury will chip into Melsahn Basabe's minutes, particularly if the latter is as inconsistent and underwhelming as last season.

On Sam Dekker: "He?ll definitely start, and he could absolutely become the team?s go-to guy right away."

With Jordan Taylor battling for an NBA roster spot, the Badgers need someone to take charge. It might be Jared Berggren early on, but Dekker should become that guy. Yes, a true freshman on a Bo Ryan team could be the focal point.

On Gary Harris: "Harris is a starter, and he?ll be a Big Ten Freshman of the Year challenger."

As good as last year's Big Ten Freshman of the Year race was between Cody Zeller and Trey Burke, wait until this season. We could be talking about a four- or five-man race in 2012-13.