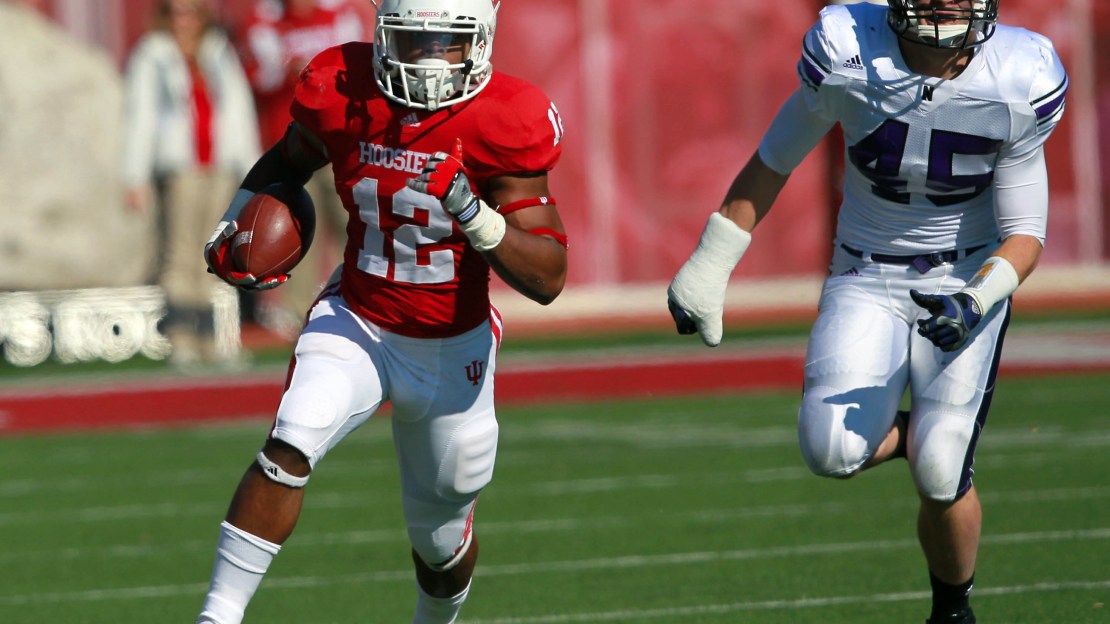 Indiana coach Kevin Wilson knows it. He knows his offense must be more productive. He knows it must score more points if the Hoosiers hope to pull out of a four-year bowl dry spell.

That?s why Seth Littrell is in Bloomington as coordinator and tight ends/fullbacks coach. He arrives from Arizona, where he pushed the buttons on a productive Wildcat offense in 2011. Arizona ranked third in the nation in passing (370.8 ypg) and 15th in total offense (465.2 ypg).

The former Oklahoma running back who helped the Sooners win the 2000 national title under Bob Stoops cut his teeth as a G.A. under Mark Mangino at Kansas from 2002-04. Littrell then matriculated to Texas Tech, where he learned under Mike Leach from 2005-08. From there, Littrell went to Arizona, where he worked his way up from running backs/tight ends coach to offensive coordinator under Mike Stoops the past three seasons.

I caught up with Littrell-who replaces Rod Smith, who left to be co-coordinator at Arizona under Rich Rodriguez–to get the low-down on what to expect from the Indiana attack this fall.

Q: How much of the offense is installed?
A: We pretty much have all of it installed. Obviously, there will be tweaks and changes, things we like and don?t like. But overall from a scheme standpoint, not much is going to change. The system Coach Wilson runs is very similar to the one I have been in. It?s tweaks here and there, getting better. Trying to get better at our weaknesses and stronger at the things we were good at.

Q: Is it safe to say you want to pass more?
A: That is definitely something we tried to work on this spring. Coach Wilson emphasized that to me, that passing it was something he wanted to do. And we emphasized it in the spring overall. We want to be more efficient in the pass game. I thought the quarterbacks got better each day. And the more they understand the concepts and grasps of each concept, it allows them to play a bit faster. But really, it?s the quarterback, running back, o-line working together, they all have to be on the same page. It?s everybody. All 11 guys have to be on the same page. We have to cut things down and want them to truly understand the concepts.

Q: Is the quarterback job open?
A: Every position is open. You have to compete every day to earn that spot when you are building a program. You have to have great competition to take that next step as a program and go to bowls and compete for championships.

Q: How is Tre Roberson progressing?
A: His athletic ability is great. When plays break down, he?s athletic enough to get you out of some stuff and make some plays with his feet down the field, and he can scramble around and pass. He came in as true freshman last year and that isn?t easy. Watching film, he did some very good things. He just has to continue to grow and understand the offense. He needed to improve in the passing game, and he hadn?t done much passing in the past in high school. He?s never really been involved in any passing camps or focused a lot on the passing game. Understanding coverages, understanding defenses, understanding where holes and seams are going to be, who we are reading - he needs work on all of that. It?s no different than running the veer option, it?s just knowing where to put your eyes, working on timing. I think he is growing and learned some things. He not only needs to put in extra time, but he needs to know how to put in extra time, what to look for when we can?t be around.

Q: How is Cam Coffman different than Roberson?
A: Not much. He?s young, too. He played as a true freshman at a JC last year. Their abilities are a little different. Cameron can come in and run any of the quarterback stuff we like in the run game. He?s athletic enough for that. He threw more in high school than Tre. But both basically are on the same level. They are young. They have to learn what to look for and how to read defenses. You will see a lot of stuff at this level from defenses.

Q: Will true freshman Nathan Sudfeld be factor?
A: He is here. Started classes. Everyone is a factor. If he?s the best guy, trust me, he?ll play. You are going to play the best 11 guys you have. Who is the best player, best fit and who can help us win.

Q: Which coaches have been most influential on you?
A: I have been fortunate to be around a lot of great coaches. I don?t know if there is one guy. The things that Coach (Bob) Stoops does at Oklahoma are great. He rubs off on you. Anyone around him knows what I am talking about. Coach (Mark) Mangino gave me my first opportunity as a G.A. and  learned a ton from him, then going to Mike Leach and then Mike Stoops, who gave me a view from the defensive side of the ball. And now Coach Wilson. So I have been around some great coaches. I have been blessed and fortunate. Hopefully, I?ll keep learning and get better.