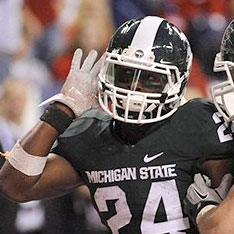 When Montee Ball opted to return for his senior season, he solidified Wisconsin as a Big Ten favorite and himself as a Heisman Trophy front-runner. Ball also cemented the Badgers? status as having the Big Ten?s top collection of running backs. And perhaps the best collection in the nation. Here is how I rate the Big Ten running back units, which are a strong collection of talent with 12 of last season?s top 14 rushers back.

1. Wisconsin. Welcome to Running Back U., which has churned out a 1,000-yard rusher seven seasons in a row. Let?s go ahead and assume that skein will be extended to eight with nation?s top ground gainer (1,923) back in Montee Ball, who tied the NCAA single-season record with 39 touchdowns in 2011. He?s the headliner of an impressive assemblage of ball carriers that also includes James White, Melvin Gordon and Jeffrey Lewis. Ball has 3,310 career rushing yards; White has 1,765.

2. Michigan State. Le?Veon Bell may be the best back in the Big Ten, running for 948 yards in 2011. Yes, even better than Wisconsin?s Montee Ball. Bell is a big back who can catch (35 receptions last year), reminding coach Mark Dantonio of Keith Byars. Bell?s numbers could be off the charts working behind a strong line. Larry Caper is a capable caddie, while diminutive Nick Hill has an extra gear and excels in the return game.

3. Michigan. Fitz Toussaint seemingly came out of nowhere last season to rush for 1,041 yards, answering the team?s gnawing need for a legit No. 1 tailback to take pressure off quarterback Denard Robinson. Vincent Smith is a tough jack-of-all-trades third-down back, while Thomas Rawls is a banger who coaches compare to Mark Ingram. Keep an eye on Justice Hayes, a quick back with giddy-up.

4. Ohio State. Yes, Dan ?Boom? Herron is gone, but the Buckeyes still have a nice collection of backs. New Ohio State coach Urban Meyer plans to dispatch Jordan Hall like he did Percy Harvin at Florida, using him in a variety of fashions. Hall had 408 yards rushing in 2011 with 12 catches. Carlos Hyde and Rod Smith are move-the-pile runners. True freshman Bri?onte Dunn has ?future star? written on him. Don?t forget about fullback Zach Boren, who may be a factor in the run game, too. Meyer wants to pound the rock-and these guys can do it.

5. Nebraska. Rex Burkhead may be the Big Ten?s ultimate workhorse. He set a school single-game standard with 38 rushes vs. Iowa last year en route to running for 1,357 yards in 2011. Speedy Ameer Abdullah must lighten Burkhead?s load. Depth was hurt when Aaron Green transferred and Braylon Heard moved to corner.

6. Penn State. It all begins with Silas Redd, one of the Big Ten?s top backs. He ran for 1,241 yards in 2011 but will work behind a line that has just one starter back. Depth isn?t great. Derek Day and Bill Belton also could be factors behind Redd.

7. Purdue. It will be important for Ralph Bolden to be healthy. And that may be an iffy proposition, given his balky knees. Bolden has suffered an ACL tear in his right knee three times, the most recent at Indiana in the regular-season finale last season, which he finished with 674 yards. Bolden rushed for 935 yards in 2009, and then missed 2010 with a knee injury suffered in spring drills. Akeem Shavers (519 yard rushing in 2011) and Akeem Hunt (287) have each shown potential to produce, giving the Boilermakers depth.

8. Indiana. Big and physical Stephen Houston arrived from a junior college last season and added punch to a usually listless ground game with 802 yards rushing. Houston also can catch the ball (17 receptions). Depth is spotty. Morehead State transfer Isaiah Roundtree looked great in the spring game. DeAngelo Roberts may get some totes. Matt Perez is a strong, physical back.

9. Illinois. Questions abound. There is no Rashard Mendenhall, no Mikel Leshoure. The team?s top rusher in 2011 was a quarterback, Nathan Scheelhaase with 624 yards. With Jason Ford and Troy Pollard gone, the Fighting Illini will turn to Donovonn Young to build on an impressive debut that saw him run for 451 yards in 2011. Speedy Josh Ferguson can juice up the attack with an extra gear.

10. Iowa. The transfers of Marcus Coker (1,384 yards in 2011) and Mika?il McCall (65) hurts, making youth and inexperience plentiful on the depth chart. Don?t be shocked if a true freshman like Greg Garmon or Barkley Hill emerges as the No. 1 option. Nifty and quick Jordan Canzeri figured in the mix until suffering a knee injury in the spring. Damon Bullock could help. Bottom line: stay tuned.

11. Northwestern. Here is all you need to know: NU?s leading rusher in 2011 was Kain Colter, a quarterback/receiver who notched 654 yards on the ground. The Wildcats haven?t had a 1,000-yard rusher since Tyrell Sutton turned the trick in 2006. Mike Trumpy is reportedly ready to go after incurring a knee injury last season. He?s a pounder. Treyvon Green is one to watch, along with Jordan Perkins. Northwestern watchers are excited about incoming freshman Malin Jones, who could play a big role.

12. Minnesota. This school once had a proud tradition of runners under Glen Mason. But those days have faded. Hope looms, however, for a program whose leading rushing in 2011 was quarterback MarQueis Gray (966). Coaches were happy with how junior college transfer James Gillum looked in the spring. He could spruce up this rushing attack. Donnell Kirkwood could be a force for a Gopher ground game that will miss Duane Bennett. And keep an eye on David Cobb.