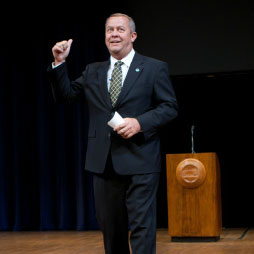 Michigan State athletic director Mark Hollis is on a roll. Since assuming command in 2008, Hollis has developed some of the most unique events in college sports in recent years, including staging a basketball game on an aircraft carrier last November.

And on the field, Hollis? teams have enjoyed great success. In 2011-12, MSU won Big Ten crowns in women?s cross country, men?s basketball and women?s golf. And the football team won 11 games for a second season in a row, capping the year by playing in the inaugural Big Ten championship game. Want more? The hockey team also played in the NCAA tourney. And on top of all of that, Hollis is on Twitter (@MSUAD).

For all of that Hollis, 49, was named athletic director of the year by Street & Smith?s Sports Business Journal. As the latest in my ongoing Big Ten Q&A sessions, I spoke with Hollis to get his thoughts on his accomplishments, as well as some challenges ahead for himself and collegiate athletics.

Q: What are you most proud of during your tenure at Michigan State?
A: I think if you look at the big events, those are the ones that get most of the attention. But some of the things you are most proud of is retaining and hiring coaches that make a difference in a student-athlete?s life, like keeping Tom Izzo during the Cleveland courtship, securing a guy like Coach Dantonio, (baseball coach) Jake Boss or Suzy Merchant our women?s basketball coach. We have really good coaches. I take a lot of great pride in doing homework and research and figuring out what?s the best match for Michigan State. It?s a people business. I take the biggest pride in getting the right people in the right positions.

Q: What are some bigger challenges facing athletic directors?
A: The biggest is the resource situation. Michigan State has a budget of about $80 million which is in the middle of the Big Ten. Yet, you are expected to compete at very high levels and provide scholarships for kids to have academic and athletic success.

When you don?t have a 100,000-seat stadium, you have to do more with less. You have fewer staff, you have individuals who maybe aren?t compensated at the same level other institutions are able to. There is a little bit of sacrifice that takes place across the board with the exception of what we provide our student-athletes. We want to have the best academic services, we want to have the best sports medicine services, venues and facilities.

That?s the biggest challenge, taking that pool of money and making sure you are allocating it in ways that will allow you to get better every year.

Q: Do you have any mentors who have helped shape you or are sounding boards you still talk to regularly?
A: Joe Castiglione at Oklahoma has been a friend for a long time. We both are on the basketball committee now, so that gives us a chance to talk even more frequently. Kit Morris, who was an athletic director at one time and was on the Knight Commission and now is the college sports marketing director for Nike, has been a great advisor about life and sport. (Florida athletic director) Jeremy Foley has become a new acquaintance who kinda of came from the same background that I did. I have great respect for a lot of the work that he does.

So, depending on what the issue is, you reach out to different people.

Q: What?s the next big event up your sleeve?
A: I think we want to look global, something that goes beyond the boundaries of the United States, and try to take the college brand, the Big Ten and Michigan State brand, to places unknown. When Greece is in a better state of mind, we want to go over and play USC in the ancient Olympic Stadium in basketball underneath the Parthenon and have the Spartans and Trojans battle it out. But there are opportunities. Europe makes a lot of sense because it?s relatively easy to get to and extends the Michigan State brand.

We are also looking at some other events. We will do something locally that celebrates a lot of milestones and the importance that Michigan State played in diversity in basketball and football.

But the next whacky, out-of-the-box one probably is gonna be something in Europe.

Q: With the landscape of college sports shifting before our eyes, where do you see conferences, five, 10 years down the road?
A: I don?t know, but I am concerned. I think if you look at college sports in general, it needs to take a step back and understand and appreciate the values we are supposed to have. We seem to be making a lot of decisions based upon one sport, based upon revenues, which they are very important to running your program. But I?m concerned about the direction it?s taking.

I?m only 49, but I?m a traditionalist and I believe regional conferences in many aspects make a lot of sense. As you go bigger, it kinda takes away from the collegiate models that got us to where we are at today. It takes a lot of time and thought to go through it, but I am concerned with where we are headed.

Q: So, you don?t think that the Big Ten should expand?
A: No. Absolutely not. We are very comfortable with where we are at right now. But I think we have to be prepared for decisions that others make and be able to protect our brand and our future. That?s the unfortunate part. There are a lot of folks who are less about trying to better their position and more so scared about the future. I think that?s why some of these decisions are being made.

Q: How do you think the Big Ten Network could improve?
A: I don?t have many complaints. It has far exceeded what I had originally thought it could do. The programming and distribution has been phenomenal. They do a good job presenting all the sports. I don?t have suggestions or complaints. I think they make good decisions.

Q: What is next for you: Big Ten commissioner?
A: Ha ha. I?m happy at Michigan State right now. We?ll just keep moving forward. I love my job and I love this industry. I feel very blessed to be in it.