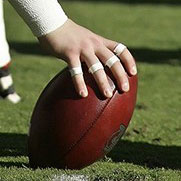 On Tuesday, the College Football Hall of Fame will announce its latest round of enshrinees. And three Nebraska players are on the ballot: quarterbacks Eric Crouch and Tommie Frazier, along with linebacker Trev Alberts. Crouch likely won?t make it since this is his first time on the ballot. But Frazier appears to have a good shot. In fact, I am flummoxed by the fact he didn?t make it last year. Just a shameful omission, as detailed by the Lincoln Journal Star's Brian Christopherson.

To kick off today's batch of Big Ten links, check out the Big Ten nominees for this year in this post. Want to see who's already in the Hall of Fame? You can search the database at www.collegefootball.org.

Here are the Big Ten players on the 2012 ballot:

Eldest statesman: The oldest coach in the Big Ten? It?s Iowa?s Kirk Ferentz, who will be 57 in September but doesn?t look a day over 37! Golly, 57 isn?t very old, is it? No, it isn?t. The last time the Big Ten?s elder statesman coach was younger was back in 1985, when 56-year-old Iowa coach Hayden Fry was the conference graybeard.

Following is a look from oldest to youngest at each Big Ten coach (ages as of September 1, 2012.).

Looking back: Check out his news flash from Ann Arbor: Michigan president Mary Sue Coleman says the school shouldn?t have hired Rich Rodriguez, and you can read about it in the Detroit Free Press. This comes from the same woman who said she never again would raise the banners earned during the ?Fab Five? era. I like her.

Coleman said that current Wolverine coach Brady Hoke ?has more of the kind of Midwestern ethos? than Rich Rod. Hmmm. He also just may be a better coach. He sure looked like it in an 11-2 debut last season.

Let?s put the RichRod hire in the same circular file with New Coke, Beta videotapes, the Brockabrella, Zima, sandals with toes, the beltless trenchcoat, ?Ishtar? and the Ford Pinto.

Volume I: It sounds like Penn State?s playbook is almost as thick as the New York City Yellow pages. In fact, the players don?t even have the full playbook as they head into the offseason.

?If you give them a whole playbook, it?s an intimidating playbook,? Bill O?Brien told StateCollege.com.

The new Nittany Lion boss thinks that in maybe five years, the players will have all of it.

Golly, isn?t that a bit much? I?m all for doing a few things VERY well-as opposed to trying to do a lot of things on an average level. Keep it simple. This isn?t the NFL. In college, players have only so much time to devote to football.

Rental market: It?s official: Minnesota has given the OK to the Vikings to play at TCF Bank Stadium.

This won?t be the first time a Big Ten venue has played home to the NFL. The Chicago Bears played the 2002 season at Illinois? Memorial Stadium while Soldier Field was being renovated. And Minnesota?s TCF Bank Stadium played host to a Vikings game in 2010 after the roof of the Metrodome collapsed following a heavy snowstorm.

Class shift: Ohio State?s move from the quarters to the semester system in 2012-13 will eliminate what I always felt was a BIG competitive advantage.

Under a quarters format, the Buckeye players were unencumbered with classes as they went through camp in August and usually at least three games. Conversely, other Big Ten players typically began classes in late August, having to balance books and football.

How was this fair?

My take: I agree with Joe Rexrode. As he says, this amounts to college free agency. And I think it hurts those ?lower-level? leagues, which typically see players who could really help them for one more year-after the originally school has invested so much in them as students and players–bolt for bigger conference teams.