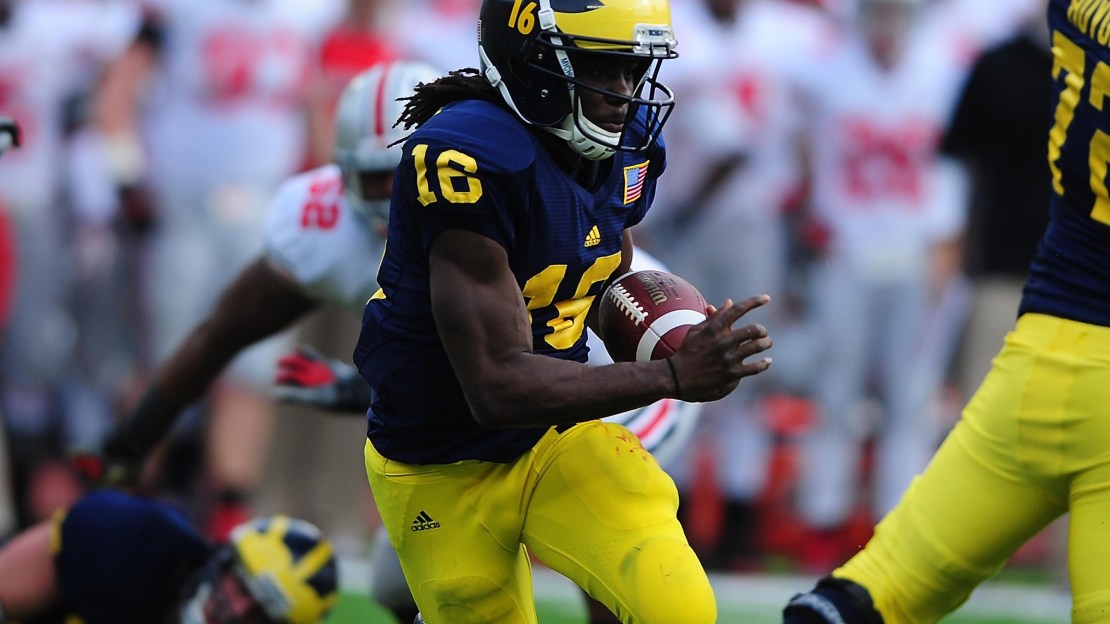 Last year brought us some epic Big Ten games. We soon won?t forget Michigan State over Wisconsin; Ohio State beating the Badgers; Nebraska rallying over Ohio State. What classics are waiting to be hatched in 2012, you ask? Good question. Get out your red Sharpie and circle these games that land on my Top 15 Big Ten clashes of 2012. Earlier, I ranked the top 15 nonconference games. Did I miss one? Tell me which Big Ten games have you fired up the most. I?m on Twitter and Facebook, too.

1. Michigan at Ohio State, Nov. 24. Welcome to Round One of Brady Hoke vs. Urban Meyer. Or, in their vernacular: ?The School Up North? vs. ?Ohio.? This is gonna be fun, America. Last season, the Wolverines snuffed out a seven-game losing skein to the Buckeyes with a 40-34 win that resembled a WAC game. That had to feel good. Now, can Michigan win in Columbus? The last time the Wolverines left the Horseshoe with a smile on their face was 2000. It?s worth noting that Ohio State will be coming off a game at Wisconsin. Michigan may be attempting to wrap up the Big Ten. Ohio State? Unable to go to a bowl or win the league title, the Buckeyes are relegated to the role of spoiler. And you know they?d love to taint the Wolverines? season. Somewhere, Bo and Woody are smiling.

2. Michigan State at Wisconsin, Oct. 27. Last year?s regular-season game has been filed under ?all-time classics,? won 37-31 by the Spartans on that way-crazy Hail Mary from Kirk Cousins to Keith Nichol. Bret Bielema probably still tosses and turns over it. The rematch in the inaugural Big Ten title game was another memorable clash, won 42-39 by the Badgers. What?s next? I can?t wait. By the way: The Spartans will be coming off a game at Michigan.

3. Michigan State at Michigan, Oct. 20. This is about as good as it gets, people; a nasty rivalry that has seen the Spartans win the last four meetings, including a 28-14 win last year. This also is a huge game that will go a long way in determining the Legends Division race. In fact, this may be a de facto Legends title game pitting what many feel are the two best teams in the division.

4. Ohio State at Wisconsin, Nov. 17. This figures to be a clash between the two best squads in the Leaders Division. Of course, the Buckeyes are ineligible to win the Big Ten or play in a bowl. But that won?t diminish their motivation to play spoiler. And they will be rested coming off a bye week, too. The Badgers will be looking for revenge after watching OSU score the game-winning touchdown with 20 seconds left in last season?s 33-29 loss, a week after Wisconsin suffered a last-minute loss at Michigan State.

5. Michigan at Nebraska, Oct. 27. This game will go a long way in determining who will win the uber-tough Legends Division. This game falls in the midst of a rugged five-game skein for the Cornhuskers that begins with Wisconsin and ends with Michigan State. Payback is on Nebraska?s mind after getting thumped, 45-17, in Ann Arbor last season. The Wolverines will be coming off an emotional game vs. Michigan State.

6. Nebraska at Michigan State, Nov. 3. This is the last of three games that figure to define the Spartans? season, as they play at Michigan and at Wisconsin the two weeks before welcoming the Cornhuskers. This game will have big implications in the Legends Division race, as Nebraska was one of just three teams to beat Michigan State last season. The Huskers, which sat on the Spartans (24-3) like no other team in 2011, will be coming off a game vs. Michigan.

7. Ohio State at Michigan State, Sept. 29. This is the Big Ten opener for both. And it could be a contest between the two best teams in the Big Ten. All the pressure is on the Spartans, as the Buckeyes aren?t eligible for a bowl or league crown. This is one of three games Ohio State plays vs. arguably the three best teams from the Legends Division (Michigan and Nebraska are the others). Weird factoid: The Spartans-a 10-7 winner last year in Columbus–haven?t beaten the Buckeyes in East Lansing since 1999, when Nick Saban was coach.

8. Nebraska at Ohio State, Oct. 6. Last year?s meeting was memorable, as the Huskers rallied from a 27-6 deficit early in the third quarter for a 34-27 triumph. This will be a homecoming for Cornhusker coach Bo Pelini, a Youngstown, Ohio, native who was a safety for the Buckeyes from 1987-90. Will Bo be booed? The Huskers will be coming off a home game vs. Wisconsin; Ohio State will be coming off a trip to Michigan State.

9. Wisconsin at Nebraska, Sept. 29. What a way for each team to open Big Ten play. In fact, this is the beginning of a rugged five-game streak that will determine if the Cornhuskers are Legends Division championship material. No doubt, the Huskers haven?t forgotten the 48-17 pummeling they suffered last year in Madison. This will be the Badgers? first trip to Lincoln since 1973. Expect lots of hand offs left; hand offs right; hand offs up the middle.

10. Iowa at Michigan, Nov. 17. Will both teams still be in the Legends Division title hunt this late in the season? The matchup of quarterbacks James Vandenberg and Denard Robinson should be good. The Wolverines, who lost a 24-16 game in Iowa City last season that had them throwing into the end zone at the end, can?t look ahead to the season finale at Ohio State.

11. Iowa at Michigan State, Oct. 13. Yes, the Hawkeyes have some yawning needs, but they could be 5-0 and coming off a bye when they travel to East Lansing in what will be Iowa?s first true road game. This is the beginning of a wicked four-game run for the Spartans that sees them travel to Michigan and Wisconsin the weeks before coming home to play Nebraska. The Hawkeyes are smarting from a 37-21 loss at home last season to the Spartans.

12. Wisconsin at Penn State, Nov. 24. This is the finale of a tough 1-2 season-ending punch for the Badgers, who play host to Ohio State the week before. In fact, these two key Leaders Division tilts could be what ultimately determine if Wisconsin will return to Indianapolis for the Big Ten title game. This may be a game the Nittany Lions-a 45-7 loser in Madison in 2011–need to win to become bowl eligible.

13. Nebraska at Iowa, Nov. 23. This is the second meeting in this new season-ending rivalry in what?s the ?Battle of I-80? on the Friday after Thanksgiving. The Huskers won last year, 20-7. Bowl positioning-and perhaps the Legends Division title-could be hanging in the balance for one or both of the clubs. The Hawkeyes will be coming off a game at Michigan; the Huskers have a home date with Minnesota.

14. Ohio State at Penn State, Oct. 27. Two programs in transition under new coaches-Urban Meyer and Bill O?Brien. The Buckeyes have fewer questions, especially on defense. And quarterback Braxton Miller figures to give Ohio State an edge in a hostile environment as the Buckeyes look to avenge last year?s 20-14 loss to the Nittany Lions.

15. Penn State at Nebraska, Nov. 10. The Big Ten?s two newest members clash, with Nebraska-a 17-14 winner in 2011–likely having more on the line. This is part of a tough second half of the season for the Nittany Lions (at Iowa; OSU; at Purdue; Indiana; Wisconsin). The Cornhuskers may be spent coming off a game at Michigan State.