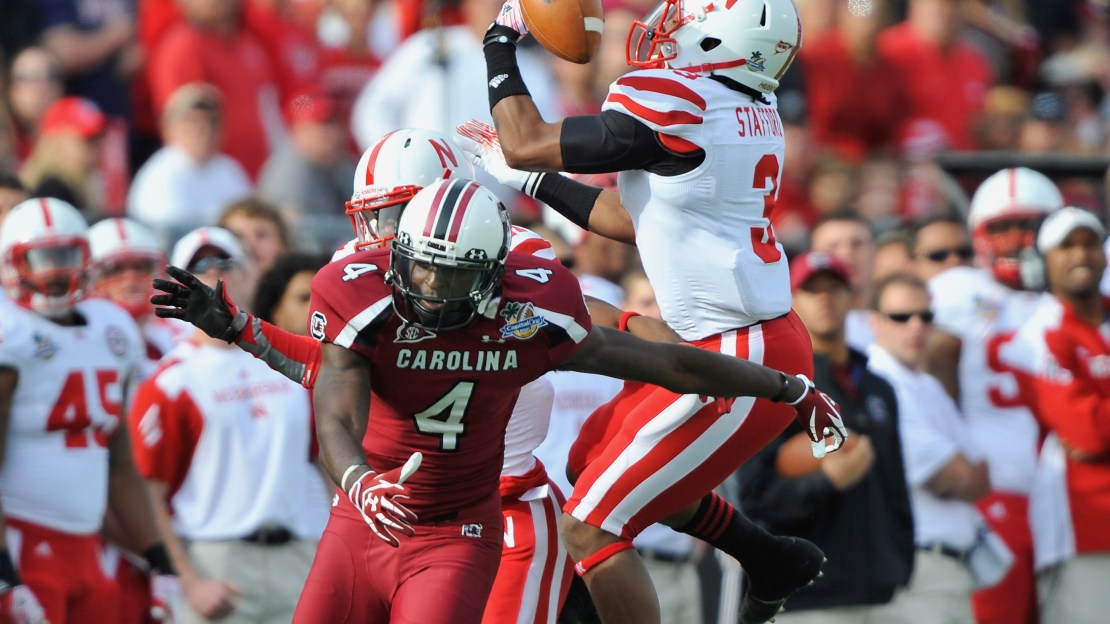 Take a spin around what is making news across the Big Ten football landscape on this day. Among other things, Michigan looks like it has a tight end ? Ohio State may have a star safety ? and more is revealed about the recruiting dust-up between Urban Meyer and Bret Bielema.

MOORE READY TO GO: It has taken four years, but Brandon Moore has become the leader of the Michigan tight ends. Moore needs to play a huge role with Kevin Koger and Steve Watson gone. And depth behind Moore is, well, woeful.

?Of course there's responsibility on my shoulders, because I'm a veteran," Moore told Kyle Meinke of AnnArbor.com. "I'm a senior, and this is our team, so there's pressure right there."

Blocking will be especially key for Moore, who must do his part to keep the strong Wolverine rushing attack humming.

"In terms of understanding what we do, I don?t think there?s any issues there," said offensive coordinator Al Borges. "He?s a smart kid. Now that he understands it, the paralysis through analysis should be gone, and pretty much is. He?s as aggressive as I?ve seen him."

ALL IN: Count Ohio State safety Christian Bryant among the Buckeyes who have bought into what new coach Urban Meyer is selling.

?I bought into it as soon as they got here,? Bryant told Tim May of the Columbus Dispatch. ?I feel like things have changed in a good way. It?s real positive around here. The new coaching staff and new strength staff, they came in here real positive and just wanting us to work hard, and that?s what we?re doing.?

Now, Bryant wants to hold onto a starting spot, as the depth chart will be set after the April 21 spring game. And Bryant wants to be a starter for Meyer, whose Florida teams typically featured a hard-hitting star safety.

KEEP YOUR EYE ON THIS: A recent story in The Sporting News by Matt Hayes examined the supposed lack of control Urban Meyer had as coach of Florida. It also looked at a supposed spat between Meyer-now Ohio State coach-and Wisconsin?s Bret Bielema over recruiting this winter.

The story claims Bielema accused Meyer of using former Ohio State players to call recruits. It also says Meyer and his staff would ?bump? into recruits during dead periods. Both are NCAA violations, if true. Some fun, juicy stuff, for sure. Will anything come of it from an NCAA violation standpoint? I doubt it.

REPLACING STARS: What areas of the Nebraska defense is coordinator John Papuchis most comfortable with? The linebackers and secondary. And that?s saying something, when you consider linebacker Lavonte David and cornerback Alfonzo Dennard-both stalwarts–are both gone.

"Daimion Stafford's made a significant jump," Papuchis told the Omaha World-News. "Ciante Evans is doing some good things. Antonio Bell. P.J. Smith. Andrew Green. That first group of secondary guys have made a pretty dramatic jump, in my opinion. And Harvey Jackson's done a nice job in the dime and also at safety."

Also, keep an eye on Mo Seisay (CB), Stanley Jean-Baptiste (CB), Braylon Heard (Nickel) and Corey Cooper (S) for a defense that has a lot to prove this fall.

?It's kind of like we're all freshmen again," receiver Justin Brown told Mark Wogenrich of The Morning Call of Allentown. "Everything is new. Nobody is experienced in the system, and everybody is learning on the fly. That's beneficial. It's going to be really exciting after we get it down."

New Penn State coach Bill O?Brien knows it?s a lot to digest. That?s why he?s willing to accept mistakes. But the beat-and learning-must go on, and at a quick pace.

?When you open any new playbook, the reaction is, 'What does this mean, what does that mean?" center Matt Stankiewitch said. "You don't want to get too far into the playbook and not know what you're talking about. ? (The coaches) definitely understand that. We don't know all the plays, and they're giving us a little leeway. Coach O'Brien said he's been very impressed we are picking up the offense."

Some big changes: movement before the snap; multiple two-tight end sets; no-huddle looks. The entire offense will move at a quicker tempo.

EYES ON THE RECEIVERS: With spring drills set to wrap up this Saturday, Iowa?s depth chart at receiver has no certainties. How will Marvin McNutt be replaced? It looks like the Hawkeyes have a sure commodity in Kennan Davis, who made 50 catches for 713 yards and four scores in 2011. And Kevonte Martin-Manley looks promising after nabbing 30 passes for 323 yards as a redshirt freshman last season. But who else will step up?

?I have no depth chart right now,? receivers coach Erik Campbell told Marc Morehouse of the Cedar Rapids Gazette. ?They?re all competing right now for that spot. Like I say, hopefully we have more than just three receivers come next fall. Right now, all the guys are competing for it.?

Steven Staggs and Jacob Hillyer are possibilities for the No. 3 slot.

?Well, I feel it?s still young,? Campbell said when asked about depth. ?A lot of guys don?t have a lot of game [experience]. When I say ?young?, I mean game experience. Right now if you look at our roster, besides Kevonte and Keenan, next guy in mind is Steve Staggs, he played a little bit in games, but a few snaps. Don Shumpert played some, but only a few snaps. Jordan Cotton had a few snaps.

?Not a lot of guys with game experience. That?s why I said it?s open for grabs right now.?

Brady Hoke said he'd be in favor of scrimmaging other teams in the spring. "There's no question that'd be something I'd be interested in."

My take: You see, this is why I like Brady Hoke. The guy has some vision-in addition to being a fine coach. To have schools scrimmage would be a great way to test each squad, promote the sport and liven up the spring ?games? that take place now that few have much interest in. How about having each Big Ten school scrimmage its rival in the spring?

It all makes too much sense. Let?s do it.

Jordan Kovacs on how Meyer's hiring affects OSU-UM game: "It's going to be great for the rivalry. 2 of the best coaches in the country…"

My take: I know, I know: coaches don?t play games. But they are the stars of college athletics, like it or not. And the specter of a decade-long (or longer?) battle between Michigan?s Brady Hoke and Ohio State?s Urban Meyer is tantalizing and the closest thing to Bo and Woody that the series has had since, well, Bo and Woody.

Mauti on Vanderlinden: "The reason I went to PSU was to work with Coach Vanderlinden. I wanted to work w/ the best LB coach in the country.

My take: And that?s exactly why new Penn State coach Bill O?Brien kept Ron Vanderlinden, the former Maryland head coach. And he will have a nice group of linebackers to work with, headed by Gerald Hodges and Mauti, who is coming off injury. Another key assistant retained by O?Brien was defensive line coach Larry Johnson, who annually recruits and develops some of the top d-linemen in the nation. Sprinkle in secondary coach John Butler and new coordinator Ted Roof, and you can see that the Nits have a strong defensive staff.