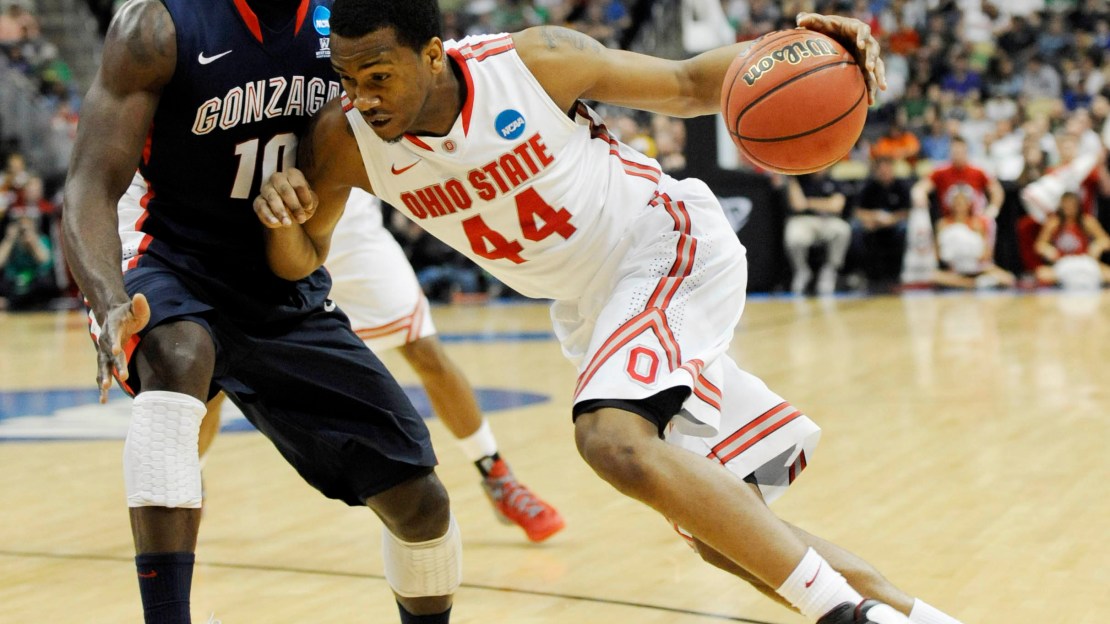 After a wild opening weekend, the Big Ten emerged with four teams among the remaining Sweet Sixteen. Today, we'll preview the Thursday games, two of which are conveniently in the same regional. In Boston, it's a four-team tournament with a Final Four spot on the line, and Big Ten teams are on both sides of the bracket. The other B1G Thursday participant will be Michigan State. We'll delve into the Boston regional before previewing the Spartans' path.

Much has been made of the absence of Syracuse's starting center Fab Melo for the NCAA tournament, and the skepticism about the Orange's chances without him looked warranted after a close call in the Round of 64 against UNC-Asheville. In the next game, however, Syracuse didn't miss the big man at all, beating a solid Kansas State squad by 16 points. It helps when you can replace your shotblocking and offensive rebounding monster with another, as former McDonald's All-American Rakeem Christmas did his best Fab Melo impression with 11 rebounds and three blocks against the Wildcats.

Setting aside Melo's shotblocking in the middle of the 2-3 zone–which Christmas can replace rather capably–Fab wasn't that big a part of what has made Syracuse successful this season. On offense, the Orange take great care of the basketball and shoot a sparkling 52 percent on twos, with the ringleader being 6-4 wing Dion Waiters. On defense, it's same as it ever was, with the Syracuse zone stifling twos and leaving opponents to force up contested threes. Recent research indicates that defenses usually have very little control over opponent three-point percentage, but Jim Boeheim's team looks like an exception–the Orange have been in the top 30 nationally in opponent three-point percentage each of the past four seasons. Watching the Badgers and their three-point-heavy offense navigate this zone will be fascinating, and Wisconsin's turnover rate will also bear watching–Syracuse has forced a turnover rate over 20 percent in all but eight games this season, while the Badgers have been forced above that mark only five times. Something will have to give when it comes to turnovers.

I fully expect Wisconsin's defense to be up to the task of slowing the potent Syracuse attack, but I'm less confident about the Badgers' ability to score, which will be extremely dependent on making threes. Look for a slow-paced, hard-fought game, and don't be surprised if the first team to 60 wins. I'll be pulling for the Badgers, but I think the Orange escape in a tight one.

This Geek says: Syracuse by 2

The Buckeyes will face their would-be in-state rivals for just the second time in 50 years and are prohibitive favorites. The Bearcats have advanced to the Sweet Sixteen on the strength of their defense, which stifled both Texas and Florida State in consecutive six-point wins. While that is a laudable feat, Ohio State's offense is a whole other animal. By adjusted efficiency rankings, Cincinnati has yet to face an offense as potent as Thad Matta's all season, and Syracuse is the only Bearcats opponent that even comes close. The Orange were able to score rather well on Cincinnati in both meetings, so it's fair to say that this defense still has something to prove.

The most obvious area of concern for Mick Cronin has to be on the defensive glass, where the Bearcats are well below the national average. Given Ohio State's ability to retrieve their misses–after all, the Buckeyes led the B1G in offensive rebounding percentage–Cincinnati has to be at least a little worried about the glass. Big man Yancy Gates will need help.

At the other end, the Bearcats can't shoot a lick, but they make ends meet by maximizing opportunities. Cincinnati sports the Big East's lowest turnover percentage and does a solid job on the offensive glass. If the Buckeyes lock down the glass like they normally do, the Bearcats will struggle to score.

Given North Carolina's sudden uncertainty at point guard, this game is probably the most lopsided (on paper) of the entire Sweet Sixteen. Ohio State should advance to face Wisconsin or Syracuse.

This Geek says: Ohio State by 12

The Spartans have been shipped all the way to Phoenix, and they'll face a Louisville squad that rose from the ashes of a disappointing regular season to win the Big East tournament. Rick Pitino's team is all about defense, and the Cardinals are now ahead of Michigan State for the nation's second-best defensive efficiency (Ohio State is number one). With the way Tom Izzo's offense has been clicking since the regular season ended, this will be a matchup of the irresistible force and the immovable object. The Cardinals defend exactly as you'd expect a Pitino team to–they force turnovers and defend the lane like crazy. Their big weakness is rebounding, a fact that should have Adreian Payne and Derrick Nix chomping at the bit. It should be noted, however, that Michigan State's recent offensive outburst has been fueled by fantastic shooting, with second chances being of reduced importance. Perhaps that should be expected in the absence of Branden Dawson, who was the team's most tenacious offensive rebounder, but it suggests that the Cardinals might actually be well-suited to slow this more recent Michigan State attack. We shouldn't be surprised if the hot shooting comes to an end on Thursday.

Of course, Louisville will also have to score if it hopes to pull the upset, and it is on that end where the Spartans appear to have the biggest advantage. The Cardinals combine a high turnover rate with poor shooting, so I'd personally be shocked to see them score over a point per trip on a defense as good as Michigan State's. Their best hope is for supersub Russ Smith–he of the 35 percent shot diet–to blow up as he sometimes can. If not, I just don't see Louisville scoring enough to beat the Spartans.

This Geek says: Michigan State by 8