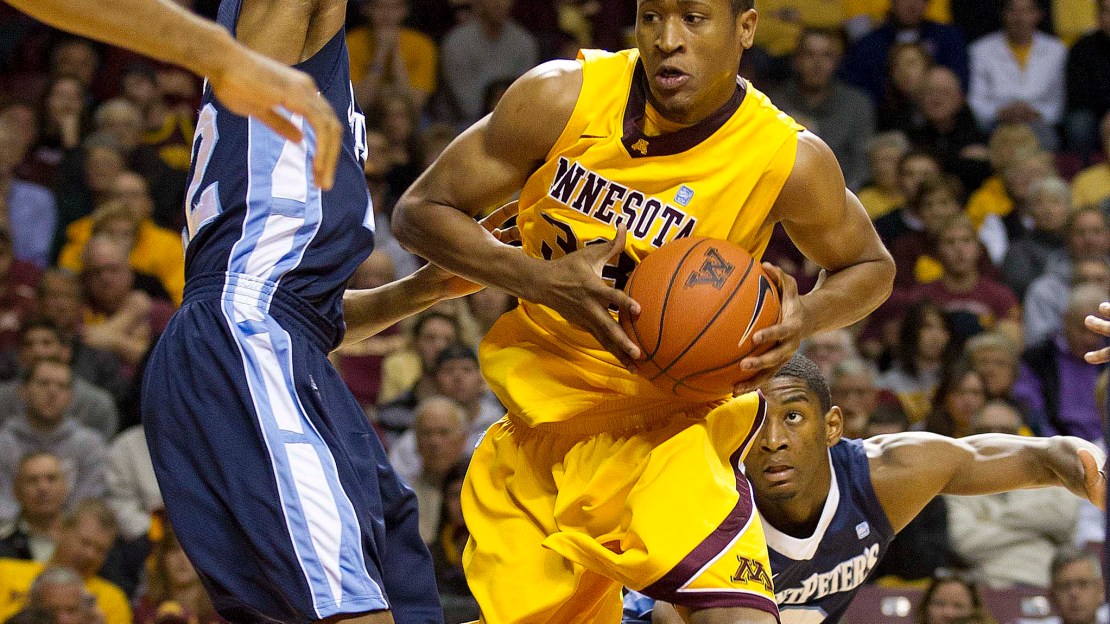 Rodney Williams scored 21 points to lead Minnesota to a 78-60 victory over Miami in a second round NIT game Monday night. The Gophers never trailed after starting the game on a 12-0 run. Williams scored 16 in the first half. Minnesota (21-14) advances to the quarterfinals at Middle Tennessee on Wednesday night. The Blue Raiders efeated Tennessee earlier Monday. Read the full AP recap, see the box score and get Tom Dienhart's analysis in this post.

Key player: Rodney Williams was a man among boys tonight. The high-flying junior scored a game-high 21 points vs. a mostly disinterested Hurricane team. Williams hit 9-of-10 shots with five rebounds and two assists in a thoroughly dominating performance that saw Minnesota jet to a 12-0 lead and never look back.

Key number: 37, rebounds for the Golden Gophers, compared to just 19 for the Hurricanes. Minnesota also shot 59.6 percent while holding Miami to 34.4 percent shooting and 16 percent from 3-point range. Those numbers helped the Gophers overcome 16 turnovers in one-sided game Minnesota led 35-23 at halftime and cruised to victory with a 15-2 burst to start the second half.

What?s next: The Gophers will take on No. 4 Middle Tennessee State, which has beaten No. 5 Marshall and No. 1 Tennessee after almost making the NCAA tourney. Win this game, and Minnesota will advance to the NIT Final Four in New York. The Gophers won the NIT in 1993 and 1998, a title it later had to vacate. This is a hot Minnesota team that dumped Northwestern in the first round of the Big Ten tourney before falling to Michigan in overtime. The Gophers have won four of their last five after losing six in a row.

Get our half-by-half recaps powered by Narrative Science:

Final: Rodney Williams scored 21 points and grabbed three rebounds and Joe Coleman added 14 points and six boards to lead Minnesota to a 78-60 victory  over Miami (FL) on Monday at BankUnited Center in the NIT. Williams picked up the offensive burden for Minnesota (21-14), finishing with 9-of-10 shooting from the field. Minnesota led 41-31 with 16:17 in the game before it widened the margin to 23 points with a 15-2 run that ended midway through the second half. Andre Hollins scored 14 points and Julian Welch added 13 points for the Golden Gophers, who shot 58 percent from the field (28-of-48). The Hurricanes struggled from the floor, shooting 35 percent (21-of-60). Winning the rebounding battle was a key to victory for Minnesota as it outrebounded Miami 36-19. The Golden Gophers never trailed in the game and their largest lead was 23, which came in the middle of the second half.