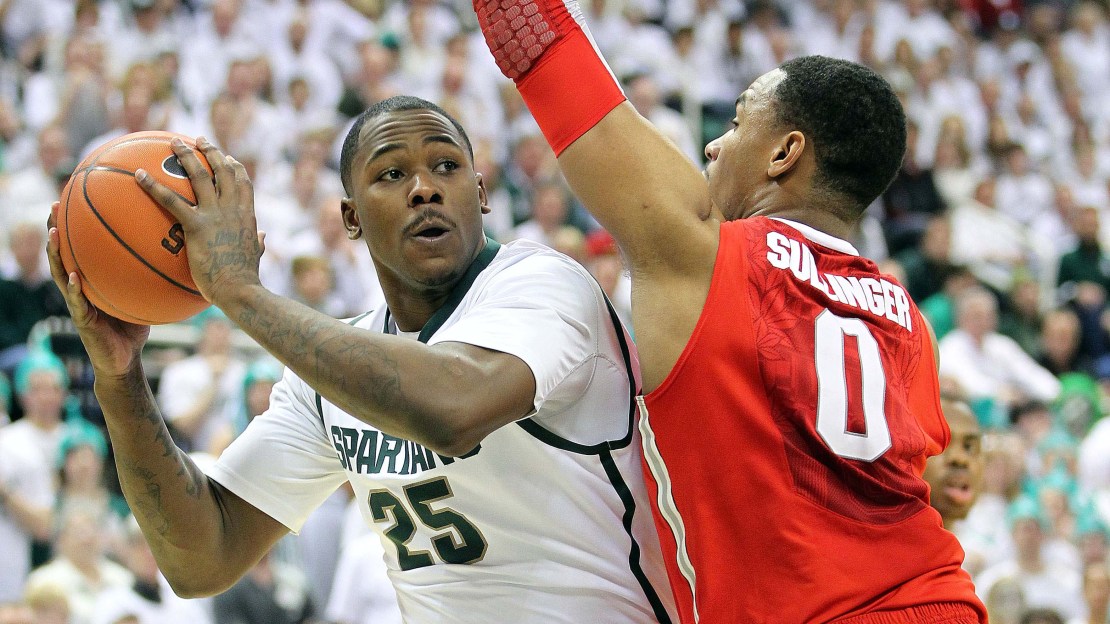 In Wednesday's web links, we look at what some of the Big Ten beat writers are saying about their school's chances in the NCAA tournament, which tips Thursday for three Big Ten teams. Also, find links and my thoughts on a trio of Big Ten big men who are filling equally big roles for Indiana and Michigan State. There's some football talk in here, too, as coaches discuss position changes. Find it all in this post.

Cody Zeller has exceeded expectations in leading the Hoosiers to a No. 4 seed, says Phil Richards of the Indianapolis Star. No doubt. We all knew Zeller was gonna be good. But this good? This fast? Zeller won Big Ten Freshman of the Year honors from the coaches. Honestly, he could have been first-team All-Big Ten, showing a basketball IQ that belies his age. And physically, he?s developed well, showing athletic ability to run the court and underrated strength in the paint. The kid is special. I just hope he remains in Bloomington for a few years. For now, Zeller is trying to lift the Hoosiers to their first NCAA win since 2007. But the first-round matchup vs. New Mexico State could be challenging.

The Buckeyes should find more room to operate on offense in the tourney than they did in the Big Ten, says Bob Baptist of the Columbus Dispatch. And this could be huge for a program that?s still trying to erase the memory of last year?s Sweet 16 exit to Kentucky. In 2011, Ohio State was the tourney?s No. 1 overall seed. It wasn?t supposed to go out there. The Buckeyes don?t figure to get bumped and banged with the regularity they were in conference action, allowing players like William Buford, Deshaun Thomas and Jared Sullinger operate without players hanging on them. And No. 2 Ohio State?s hopes also got a boost when news broke that Syracuse-the No. 1 seed in the Buckeyes? East Region–will be without star big man Fab Melo because of an eligibility issue. Minus Melo, I think Ohio State becomes the team to beat in that region. And maybe it can make a run all the way to New Orleans and the Final Four.

Michigan State?s Derrick Nix and Adreian Payne have grown into a formidable pair inside, says Matt Charboneau. How many teams have a beefy tandem like that? Not many. The two rarely have played together, but it has happened since Branden Dawson was lost to a knee injury in the regular-season finale. Payne and Nix are big bodies who have athletic ability around the rim. And they also can run the court. It?s scary, people. But the NCAA tourney is still a guard-oriented event, so the Spartans figure to sink or swim based on the play of Keith Appling, Brandon Wood and the other Michigan State backcourt members. Still, Nix and Payne can have a big impact.

The Boilers are the nation?s best at limiting turnovers, says Jeff Washburn of the Lafayette Journal-Courier. Without that, I don?t think Purdue would even be in the Big Dance. The Boilermakers don?t rebound well, lack size and get minimal points in the paint. To succeed, Purdue has had to limit turnovers and shoot lights out. Those things have happened, which is why Matt Painter?s crew is in the Big Dance for a sixth year in a row. But how long will Purdue dance with an opening game vs. St. Mary?s followed by a potential matchup with No. 2 Kansas?

The Wolverines hear upset talk but aren?t worried about it, says Nick Baumgardner of AnnArbor.com. Michigan didn?t look great in the Big Ten tourney, needing overtime to dispatch No. 10 seed Minnesota and then losing by 20 to No. 3 seed Ohio State in the semifinals. Now comes the NCAA tourney. This is a talented team led by freshman guard Trey Burke, who can get into the lane for a layup or kick out a pass to an open shooter like Zack Novak, Stu Douglass or Evan Smotrycz on the wing. Many feel Ohio of the MAC could upend the Wolverines in the first round, but this is a motivated Michigan team that?s looking for its first Sweet 16 trip since-Are you ready for this?-1994.

OTHER LINKS OF NOTE

Illinois
Hiring learning: A look at the coaching search from the Champaign News-Gazette.

Michigan
A slow start could mean a quick exit, opines Michael Rosenberg of the Detroit Free Press.
John Beilein has been on both sides of the underdog divide, says John Niyo of the Detroit News.
Brady Hoke talks spring position changes, says Kyle Meinke of AnnArbor.com.

Michigan State
Tom Izzo is the master of the one-day turnarounds, writes Shawn Windsor of the Detroit Free Press.
The Spartans adapt without Branden Dawson, says Joe Rexrode of the Lansing State Journal.

Nebraska
The Cornhuskers have contacted Rob Jeter of Wisconsin-Milwaukee, says Brian Rosenthal of the Lincoln Journal Star.
Nebraska is unlikely to comment until after the coaching search is over, says Lee Barfknecht of the Omaha World-Herald.
Cole Pensick gets a chance to replace his mentor at center, says Steve Sipple of the Lincoln Journal Star.
Braylon Heard is on the move from I-back to cornerback, says Rich Kaipust of the Omaha World-Herald.

Ohio State
Urban Meyer is planning a demanding spring camp as he looks for ?fighters,? says Doug Lesmerises of the Cleveland Plain Dealer.

Wisconsin
Finding a comfortable speed is key for the Badgers to avoid those scoring lapses, says Jim Polzin of the Wisconsin State Journal.