Ohio State pulls away from Purdue 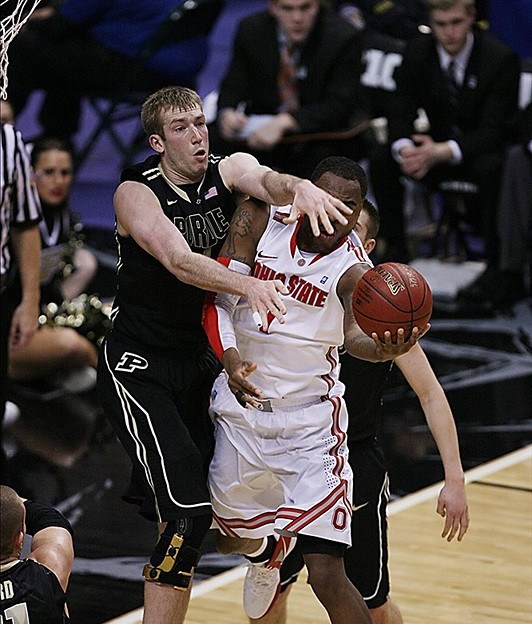 Jared Sullinger scored 30 points and grabbed 12 rebounds to lift No. 7 Ohio State to an 88-71 win over Purdue on Friday at Bankers Life Fieldhouse in Indianapolis in the Big Ten Tourney. Both Sullinger and Deshaun Thomas played well for Ohio State (26-6). Sullinger knocked down 12-of-17 shot attempts. Thomas had 22 points, hauled in seven rebounds, and made 9-of-13 shots from the floor. Get BTN.com Senior Writer Tom Dienhart's take on the game from courtside inside this post plus full recaps, videos, and more.

Tom Dienhart's key Ohio State player: Jared Sullinger. The big man was on his game tonight, avoiding foul trouble and playing a huge role vs. a Purdue team that was overmatched on the interior. The sophomore hit 12-of-17 shots for 30 points. He also grabbed 12 rebounds with three blocks. Sullinger received a big assist from Deshaun Thomas, who scorched Purdue for 22 points. How dominate was OSU inside? It outscored Purdue, 48-18, in the paint and outrebounded the Boilers, 39-28.

Tom Dienhart's key Purdue player: D.J. Byrd had a big game vs. the Buckeyes in Columbus earlier this year, scoring 24 points in a three-point loss. And he thrived again tonight, notching a team-high 20 points off the bench on seven-of-16 shooting. Lewis Jackson also did his part as a penetrator. But Robbie Hummel? He was muted, held to six points.

Tom Dienhart's key moment: After a D.J. Byrd three-pointer made it 62-59 Ohio State with 7:29 left, the Buckeyes ran away from the Boilermakers. Ohio State outscored Purdue, 26-12, the rest of the way. Ohio State is too good and too talented and has now won three in a row and four of five. The Buckeyes are getting hot at the right time.

What?s next for Ohio State? The Buckeyes are looking to maintain ownership of this event, shooting for their fourth tourney title game appearance in succession and third championship in a row. The Buckeyes have won four league tourney crowns, more than any other school, and have been in the championship game seven times, more than any other school. But next, they will battle rival Michigan in the semifinals as OSU hopes a run to the Big Ten tourney crown may lead to a No. 1 seed in the NCAA tourney-a long shot, it would seem.

What?s next for Purdue? For the Boilermakers, it?s off to the NCAA tourney. They did nothing to help their seeding in this event. And, as it stands, the Boilermakers look destined to be a dreaded No. 8 or 9 seed, which would mean a game vs. a No. 1 seed in the second round if Purdue wins its opening game.

FINAL RECAP: Jared Sullinger scored 30 points and grabbed 12 rebounds to lift No. 7 Ohio State to an 88-71 win over Purdue on Friday at Bankers Life Fieldhouse in Indianapolis in the Big Ten Tourney. Both Sullinger and Deshaun Thomas played well for Ohio State (26-6). Sullinger knocked down 12-of-17 shot attempts. Thomas had 22 points, hauled in seven rebounds, and made 9-of-13 shots from the floor.

Ohio State broke out to an early 10-point lead after a 13-3 run with 15:02 left in the first half. Sullinger capped the run off with a field goal to help the Buckeyes lead 40-36 at the half.

More Ohio State scoring came from Aaron Craft, who scored 10 and Lenzelle Smith Jr. and William Buford, who each scored 11.

D.J. Byrd contributed 20 points for Purdue (21-12) in the loss. The Boilermakers were on fire from beyond the arc during the game, shooting 44 percent (11-of-25). Purdue also got double-digit games from Lewis Jackson, who scored 10 and Terone Johnson, who scored 16.

The Buckeyes won the rebounding battle en route to victory, pulling down 35 boards to 22 for the Boilermakers. Ohio State never trailed in the game. The Buckeyes' largest lead was 18, which came with 29 seconds to go.

The Buckeyes led from the start and led by as many as 10 points.

The game was tied before the Boilermakers went into a funk, going the next 2:55 without scoring, and allowing Ohio State to take a 9-0 lead early in the game.

The Boilermakers' leading scorer, Robbie Hummel, has been contained by Ohio State thus far. The senior enters halftime with three points, well below his season average of 16.6. Purdue fired often and fired with accuracy from distance, hitting 46 percent (6-of-13) of its three-point attempts. The Boilermakers played team basketball in the first half, to the tune of nine assists on 13 field goals. Purdue got points from seven different players.

D.J. Byrd is putting together a nice game so far for Purdue. The junior has 10 points.

After watching him shoot a free throw, it's no mystery why T. Johnson's percentage is at 42. #ouchbackboard #b1gtourney