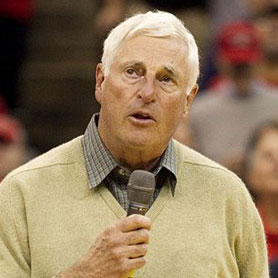 Nicknamed "The General," Knight owns 902 coaching wins, ranking second all-time among NCAA Division I coaches. The six-time Big Ten Coach of the Year transformed Bloomington, Ind., into a basketball Eden, leading the Hoosiers to NCAA titles in 1976, 1981 and 1987 on the pillars of effort, discipline and sound fundamentals.

"Bobby Knight was a basketball purist," Ebling said. "The thing I liked best about Bob Knight was, he coached against the game, not the opposition. He could be very happy with his team, in defeat, and he could be very upset with a 40-point win, if they hadn't been true to the game and the principles he taught."

Thirteen years after leading the Hoosiers to the 1987 title, Knight's illustrious reign over the Indiana program came to a controversial end. Yet many of his players still appreciate the way he educated them, both in basketball and in life.

"Words can't really express how fortunate I feel, to have been coached by Bob Knight," Thomas said. "Had I not gone to Indiana, and had Coach Knight not coached me, I don't think I ever would have been the player that I became, or the person that I am."