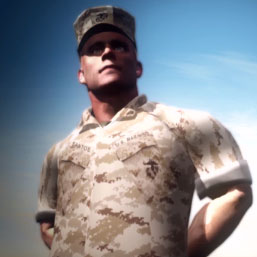 A new episode of BTN's new original series, Impact The World, airs at 10:30 p.m. ET Tuesday. Hosted by Dennis Haysbert, the weekly program showcases some of the incredible Big Ten breakthroughs that are changing lives in the United States and around the world. The final installment of the eight-episode series will explore ground-breaking safety developments from three Big Ten universities, ranging from the military and law enforcement to homeland security:

The life of a soldier is fraught with challenges, but what if soldiers knew how they could respond to certain elements before setting foot on the battle field? A team of biomedical engineers at the University of Iowa Virtual Soldier Research program are collaborating to provide soldiers those answers with help from Santos, the virtual solider. The computerized avatar is an exact duplicate of the human skeletal and muscular systems, and can react with different senses, including smell, sight and touch on command. The program's ultimate goal is to improve safety for soldiers in war zones by demonstrating how much equipment soldiers can carry on a mission without compromising their safety.

Robots are no longer the stuff of science fiction. In fact, at the University of Minnesota's Center for Distributed Robotics, Dr. Nikos Papanikolopoulos and his graduate students are changing the way swat teams and military do reconnaissance. Their mission is to save lives on the front lines and they are having greater success – thanks to the help of a little robot called Scout. The United States military, police and SWAT teams use the Scout robot as a safety precaution to survey risk areas ahead of troops. Each robot is operated by a remote control device and equipped with a camera that feeds visuals back to the command center.

With greater emphasis placed on security, universities across the nation have seen information sciences and technology majors grow in scope to include all levels of security. However, perhaps no program is more relevant than Penn State's newest major – Security and Risk Analysis (SRA). The program teaches students how to design secure systems and solve real-world problems, including terrorism, fraud and security risks. One key component of the program's success is Professor Colonel Jake Graham, who encourages students to re-enact real world events in the Extreme Event's Lab for tangible results. In this episode, the network examines why Penn State SRA majors are among the most desirable job candidates in their designated field.

Also, watch three full segments from the last episode of "Impact the World" below: